A celebration of the traditional connections between human lives, the seasons and the natural world form the basis of a new book by University of Exeter academic, Professor Nick Groom.

The book, called ‘The Seasons: An Elegy for the Passing of the Year’, is an urgent plea for English rural traditions not to be forgotten, and investigates not only how society is becoming cut off from the rhythms of the natural world, but also the ways in which the annual cycle has been celebrated for centuries. 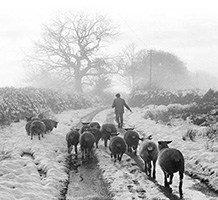 Front bookcover: ‘The Seasons: An Elegy for the Passing of the Year’. Image credit: University of Exeter

The month of February, deriving either from the Latin ‘februa’ (month of cleansing) or from Februus (a pagan god of the underworld) is notorious in weather lore for having the worst weather. But it was also, according to Professor Groom’s research, the traditional time for the natural world to begin to stir again in preparation for spring, and Candlemas Eve (1 February) was the usual time for taking down Christmas greenery.

This year marks the one thousandth anniversary of the first mention of Candlemas itself (2 February, in the year 1014), during which blessed candles were carried into church. Early calendars predict birds first singing on 13 February (coincidentally the day on which Hell was made) and leap day was originally St Matthias’s Day, 24 February: a good day for second chances.

The book acknowledges that before the majority of the population migrated to towns and cities, the people of Britain were in a much more intimate relationship with the seasons, knitted into the rhythms of the year through a wealth of weather lore and wisdom accumulated over centuries. Local agriculture provided the vast majority of the nation’s food, the welfare of Britain was effectively dependent on the weather, which had a defining impact on the harvests and consequently the economy, politics, and policy. It also made a huge difference to the wellbeing, health and ultimately survival of the population.

Nick Groom, an English Professor at the University of Exeter’s Penryn campus, said:“We are witnessing the eradication of the seasons with all-year produce and the replacement of local festivities with mass celebrations of a tiny handful of uniform events, turning contemporary society into an identikit culture with a standardised marketplace. In the past, the customs and rituals that marked the passing of the year linked society and culture to the environment and in doing so reflected their values of community and ecology.”

He added:“My answer is not only that we should revive forgotten customs, but that we can also establish new traditions that properly reflect today’s values and ambitions.”

According to ‘The Seasons’ book there is a dazzlingly rich calendar of customs, traditions, folklore and superstition attuned to the year, one that is part of a shared cultural heritage, that gives meaning to the land and our place within it. The most important aspect being that throughout history, the relationship with the seasons has been a reflection of its most pressing social values.

Professor Groom said:“We are faced with a choice to acknowledge the seasons, respect shifting fluctuations of the year and its influences on flora, fauna, and adapt ourselves to the environment by being part of it. The other option is to dismiss, overpower and obliterate the seasons by forcing the world’s resources to focus solely on us as western consumers.”