*Specialized structures used by cancer cells to invade tissues could also help them escape protection mechanisms aimed at eliminating them, a UA-led research team has discovered.*

Delicate, threadlike protrusions used by cancer cells when they invade other tissues in the body could also help them escape control mechanisms supposed to eliminate them, a research group led by led by Bradley Davidson in the University of Arizona’s department of molecular and cellular biology reports in Nature Cell Biology.

Studying embryos of the sea squirt Ciona intestinalis, the researchers discovered that even non-invasive cells make the delicate, highly transient structures known as invadopodia. The group found that future heart cells in the Ciona embryo use invadopodia to pick up chemical signals from their surroundings. These so-called growth factors provide the cells with clues as to where they are in the developing embryo and what type of cell they are supposed to turn into.

The results suggest that this previously unknown role of invadopodia could also be at play in the case of cancer cells: Their invadopodia may serve to bind similar signaling molecules that protect them from the body’s elimination processes, thereby ensuring their survival. 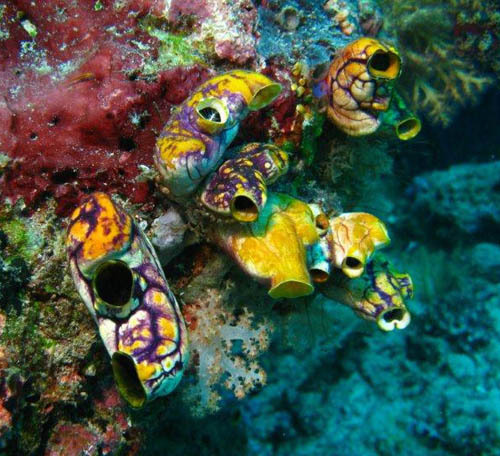 Sea squirts such as these colorful specimens found on an Indonesian reef spend their adult lives attached to rocks, piers or the like, straining tiny food particles from seawater. Image credit: Kandie Vactor

“These are special invasive protrusions and they are seen only in rare cell types and cancer cells. We are the first to see them in the developing Ciona embryo, and we certainly didn’t expect to see them in that context,” said Davidson, who is a member of UA’s Arizona Cancer Center. “In Ciona, the cells that are making these special kinds of arms do not use them for invasion. Those cells behave very differently from cancer cells.”

Cells form invadopodia in a process that resembles pitching a tent: They push a portion of their rigid, internal scaffolding into a portion of the cell membrane which envelopes the entire cell, thereby extending a long, thin protrusion outward.

“These structures are extremely fragile. The cells grow and retract them over short periods of time,” Davidson said. “For that reason, they are almost impossible to see in fixed specimens. We think they are probably a lot more common than people realize.”

Cancer cells have been known for a long time to use invadopodia to break through tissues that serve as natural barriers keeping cells in check and make sure they stay in their assigned locations.

Because of its anatomical simplicity and genetic similarity to vertebrates, Brad Davidson and his team study the sea squirt Ciona intestinalis as a model organism for heart development. This image shows heart and tail muscle precursor cells (red) in different developmental stages. Image credit: Bradley Davidson

“Most cells can never cross those epithelial barriers,” Davidson said. “They play an important role in controlling the location and movement of cells, especially in a developing embryo.”

“When a tumor spreads, its cells have to break out and escape to other tissues,” Davidson explained. “To do that, they have to invade a blood vessel, travel to their new location and then get back out, which requires them to squeeze through the linings of blood vessels and invade similar barriers at their destination.”

Because of the cancer cells’ ability to break through barriers and invade tissues, researchers are very interested in the mechanisms allowing those cells to behave this way. 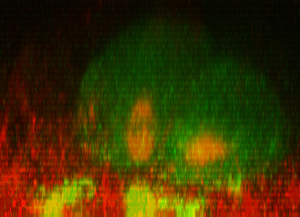 “There are a number of ways they can break through the barriers,” Davidson explained. “Sometimes they’ll actually fully disrupt the wall, make a break in the wall and push through. Cancer cell invadopodia secrete proteins that help make these breaks and also can physically push cells aside.”

The cells in Ciona, however, use their invadopodia quite differently, the researchers discovered.

Inititally, the team was investigating a completely different scientific question: how the heart forms in the developing Ciona embryo. The sea squirt’s simple body structure belies its close biological kinship to vertebrates, including humans.

In fact, Ciona shares most of its genes with vertebrates. Ciona has a brain, eyes, a mouth and a gut and a heart. While fundamentally similar, the developing Ciona embryo is much less complex than a vertebrate embryo. The combination of genetic similarity and anatomical simplicity makes the sea squirt an ideal model organism to disentangle biological processes that would be too complex to study in vertebrates.

Davidson is especially interested in figuring out the genes controlling heart development, with the goal of deciphering the underlying mechanisms of congenital heart defects in humans. Unlike its human counterpart, Ciona’s heart is very simple and develops in a very specific and predictable process. One particular cell gives rise to all future heart cells. When that cell undergoes its first division resulting in two daughter cells, only one of them, and always the same one, becomes a heart progenitor cell continuing the lineage while the other gives rise to tail musculature.

“We were trying to figure out how the cells make that decision,” Davidson said. “We knew that there are chemical signals, growth factors, that coax one of the cells into becoming a heart cell, but we had no idea why one cell responds to those signals and the other one doesn’t.”

When the researchers labeled the membranes of the cells to make them visible with a highly sensitive laser microscope, they discovered that the heart progenitor cell differed from its sister in that it made invadopodia. Unlike cancer cells, however, the cells in Ciona did not appear to use their invadopodia to invade tissues.

“They engulf an adjacent cell, but then pull back,” Davidson said. “They never do anything else with their invadopodia, they never push through. That’s what made us ask, why are they doing this?’ It suggests they use their protrusions for something else.”

The researchers then discovered that the cells making invadopodia responded much stronger to growth factor signaling than other cells, suggesting their invadopodia function as antennae to pick up signals that instruct the cell to become a heart progenitor cell.

This finding offers an intriguing possibility: Could it be that cancer cells too use their invadopodia as antennae, giving them the additional benefit of being more receptive to, or even independent of, growth factor signaling?

When cells become cancerous, they take on a dangerous life of their own. For example, a normal cell will not proliferate unless it is being told to do so by chemical signals such as growth factors. Likewise, a cell that is part of a tissue will stay in its assigned place.

Protective mechanisms are in place to prevent cells from going rogue. Most mutations that could make a cell cancerous trigger a genetic auto-destruction program. Cancer develops if a cell manages to accumulate cancerous mutations enabling it to wrestle itself free from such control mechanisms and proliferates even in the absence of growth factors or leaves its home tissue and invades other tissues.

“Our findings in Ciona may change the way we think about cancer,” Davidson said. “Instead of starting out as a mass of cancer cells – the tumor – it is possible that small groups of cells or even single cells gain the ability to metastasize very early on by using invadopodia to boost their survival signaling.”

“Such a cancer progenitor cell would be very difficult to detect because there is no tumor yet. There are likely specific proteins or specific components that allow a cell to use its invasion as an antenna. If we can find those components, they could be promising targets for cancer therapy because this is a process that most cells would never need to do. It’s very specific to a cancer cell. So the hope would be to target those cells very early, before they start making tumors, without harming the rest of the cells.”