EAST LANSING, Mich. — Fables have long cast scorpions as bad-natured killers of hapless turtles that naively agree to ferry them across rivers. Michigan State University scientists, however, see them in a different light.

Ke Dong, MSU insect toxicologist and neurobiologist, studied the effects of scorpion venom with the hopes of finding new ways to protect plants from bugs. The results, which are published in the current issue of the Journal of Biological Chemistry, have revealed new ways in which the venom works.

Past research identified scorpion toxin’s usefulness in the development of insecticides. Its venom attacks various channels and receptors that control their prey’s nervous and muscular systems. One major target of scorpion toxins is the voltage-gated sodium channel, a protein found in nerve and muscle cells used for rapid electrical signaling. 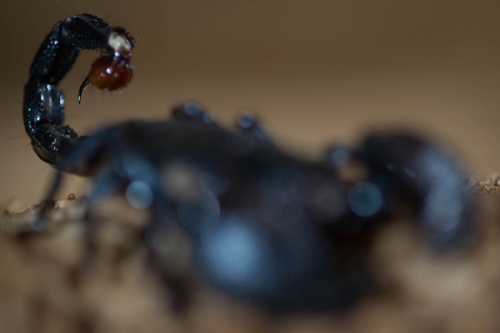 Dong and a team of researchers were able to identify amino acid residues in insect sodium channels that make the channels more vulnerable to the venom from the Israeli desert scorpion. The team also discovered that an important sodium channel voltage sensor can influence the potency of the scorpion toxin.

At night, entomologists use black lights to spot scorpions, which give off an eerie glow. Photo by Greg Kohuth.

Several classes of insecticides act on sodium channels, but insects become resistant to them over time. The researchers are studying how insects develop resistance and what alternatives can be created to control resistant pests, Dong added.

Scientists from Tel Aviv University and the University of California at Irvine contributed to this study. Dong’s research is funded in part by the National Science Foundation, the National Institutes of Health, the Binational Agricultural Research and Development Fund, and MSU AgBioResearch.