Earth scientists are laying plans for a two-year study covering a broad area of southwestern Washington to develop a better understanding of how Mount St. Helens gets its supply of volcanic magma.

“The main goal is to understand the plumbing system of the mountain,” said Kenneth Creager, a University of Washington professor of Earth and space sciences who is leading the study.

The project, called Imaging Magma Under St. Helens, could bring improvements in volcanic monitoring and advance warning systems at Mount St. Helens and other volcanoes. 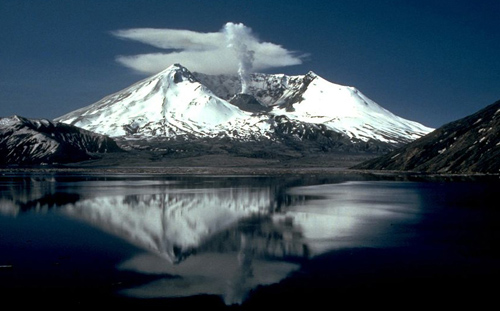 Mount St. Helens as it appeared two years after its catastrophic eruption on May 18, 1980. Image credit: U.S. Geological Survey

Though the work will not be completed until the summer of 2016, most instruments will be deployed for substantially less time. Work planned inside Gifford Pinchot National Forest and Mount St. Helens National Volcanic Monument will not begin until after federal environmental permits are obtained.

The resulting data could well change the general understanding of how volcanoes work and should provide a much clearer idea of what is happening below Mount St. Helens.

“Previous work has shown there is magma down to about 3 miles deep, but there is not a large reservoir of the molten rock, he said. “We need a clearer picture of this magma system and its deeper origins.”

Mount St. Helens was chosen because it has been the most active volcano in the Cascade Range, erupting twice in the last 35 years, and is readily accessible for the researchers and their equipment.

“Developing a better understanding of the underlying magma system and how it relates to the top of the volcano will allow scientists to make more accurate assessments of the volcano’s status when it becomes active in the future,” Creager said.

The passive-source seismic monitoring will use solar-powered seismometers at 70 sites over about 3,600 square miles centered on Mount St. Helens, and will record local earthquakes and large quakes that occur much farther away, as well as other types of events. That equipment will be installed in 2014 and left in place for two years.

Magnetotelluric monitoring (observing fluctuations in Earth’s electromagnetic field) will take place at 150 sites spread across about 14,000 square miles, an area that includes both Mount Adams and Mount Rainier. Compact battery powered instruments buried about 2 feet deep will include a recording device and a sensor that picks up magnetic signals.

Active-source seismic monitoring, planned for July and August 2014, will use 6,800 seismometer sites over 10,000 square miles. The instruments will measure seismic waves generated by the detonation of 1,000 to 2,000-pound charges in 24 boreholes that are 80 feet deep. The detonations, which will produce vibrations that approximate small earthquakes measuring from magnitude 1 to 2, would take place when there is little other activity going on to interfere with the signals. Detonation sites will be in areas of already disturbed ground such as clear-cuts, quarries, gravel pits and garbage dumps.

Besides UW, the project’s participants include Oregon State University, Lamont-Doherty Earth Observatory of Columbia University, Rice University and the U.S. Geological Survey. Primary funding is from the National Science Foundation.