A team of 70 scientists from the U.S., China, Australia and Japan today reports having sequenced and annotated the genome of the “sacred lotus,” which is believed to have a powerful genetic system that repairs genetic defects, and may hold secrets about aging successfully. The scientists sequenced more than 86 percent of the nearly 27,000 genes of the plant, Nelumbo nucifera, which is revered in China and elsewhere as a symbol of spiritual purity and longevity.

“The lotus genome is an ancient one, and we now know its ABCs,” said Jane Shen-Miller, one of three corresponding authors of the research and a senior scientist with UCLA’s Center for the Study of Evolution and the Origin of Life. “Molecular biologists can now more easily study how its genes are turned on and off during times of stress and why this plant’s seeds can live for 1,300 years. This is a step toward learning what anti-aging secrets the sacred lotus plant may offer.” 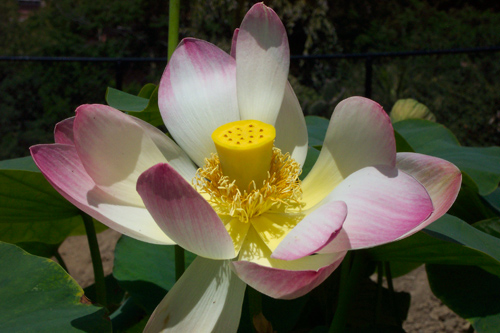 The research was published on May 10, 2013 in the journal Genome Biology.

Shen-Miller said the lotus’ genetic repair mechanisms could be very useful if they could be transferred to humans or to crops — such as rice, corn and wheat — whose seeds have life spans of only a few years. “If our genes could repair disease as well as the lotus’ genes, we would have healthier aging. We need to learn about its repair mechanisms, and about its biochemical, physiological and molecular properties, but the lotus genome is now open to everybody.”

In the early 1990s, Shen-Miller led a UCLA research team that recovered a viable lotus seed that was almost 1,300 years old from a lake bed in northeastern China. It was a remarkable discovery, given that many other plant seeds are known to remain viable for just 20 years or less.

In 1996, Shen-Miller led another visit to China. Working in Liaoning province, her team collected about 100 lotus seeds — most were approximately 450 to 500 years old — with help from local farmers. To the researchers’ surprise, more than 80 percent of the lotus seeds that were tested for viability germinated. That indicated that the plant must have a powerful genetic system capable of repairing germination defects arising from hundreds of years of aging, Shen-Miller said. 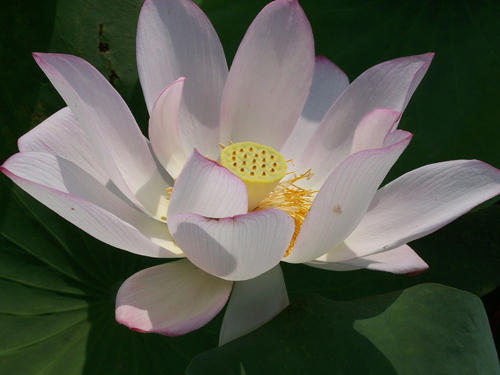 Understanding how the lotus repair mechanism works — and its possible implications for human health — is essentially a three-step process, said Crysten Blaby-Haas, a UCLA postdoctoral scholar in chemistry and biochemistry and co-author of the research. “Knowing the genome sequence was step one. Step two would be identifying which of these genes contributes to longevity and repairing genetic damage. Step three would be potential applications for human health, if we find and characterize those genes. The genome sequence will aid in future analysis.

“The next question is what are these genes doing, and the biggest question is how they contribute to the longevity of the lotus plant and its other interesting attributes,” Blaby-Haas said. “Before this, when scientists studied the lotus, it’s almost as if they were blind; now they can see. Once you know the repertoire of genes, you have a foundation to study their functions.”

The genome sequence reveals that, when compared with known gene sequences of dozens of other plants, the lotus bears the closest resemblance to the ancestor of all eudicots, a broad category of flowering plants that includes the apple, peanut, tomato, cotton, cactus and tobacco plants.

The lotus forms a separate branch of the eudicot family tree; it lacks a signature triplication of the genome seen in most other members of this family, said Ray Ming, professor of plant biology at the University of Illinois at Urbana-Champaign, who led the analysis with Shen-Miller and Shaohua Li, director of the Wuhan Botanical Garden at the Chinese Academy of Sciences.

Whole-genome duplications — the doubling or tripling of an organism’s entire genetic endowment — are important events in plant evolution, Ming said. Some of the duplicated genes retain their original structure and function, and others gradually adapt and take on new functions. If those changes are beneficial, the genes persist; if they’re harmful, they disappear from the genome. 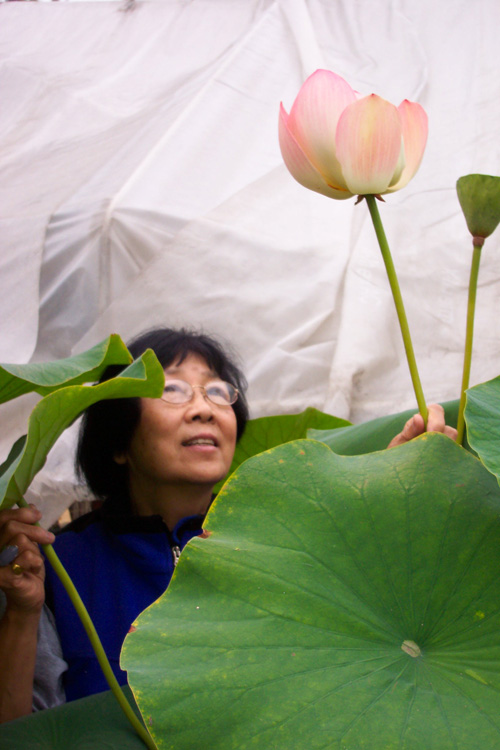 Many agricultural crops, including watermelon, sugar cane and wheat, benefit from genome duplications, said Robert VanBuren, a graduate student in Ming’s laboratory and a co-author of the study.

Shen-Miller said experts in aging and stress will be eager to study the lotus genes because of the plant’s extraordinary longevity. “The lotus can age for 1,000 years, and even survives freezing weather,” she said. “Its genetic makeup can combat stress. Most crops don’t have a very long shelf life. But starches and proteins in lotus seeds remain palatable and actively promote seed germination, even after centuries of aging.”

The lotus’ unusual genetics give it some unique survival skills. Its leaves repel grime and water, its flowers generate heat to attract pollinators and the coating of lotus fruit is covered with antibiotics and wax that ensure the viability of the seed it contains.

Blaby-Haas studied lotus gene families potentially involved in how plants metabolize metals. One family, in particular, caught her attention. “We found that the lotus has 16 of these genes, while most plants have only one or two,” Blaby-Haas said. “Either this is an extremely important protein in the lotus, which is why it needs so many copies, or the duplication allows a novel function to arise; we don’t know which is correct.”

These genes may be related to the unique environment of the lotus, which grows with its roots submerged in water, she said. (Lotus was a land plant that adapted to the water.)

The sacred lotus is known from the geologic record as early as 135 million years ago, when dinosaurs roamed the Earth, Shen-Miller said. It has been grown for at least 4,000 years in China, where every part of the plant has long been used in food and medicine.

Co-author Sabeeha Merchant is a UCLA professor of biochemistry whose laboratory studies the biology of metals like iron, copper and zinc. Other co-authors include J. William Schopf, director of UCLA’s Center for the Study of Evolution and the Origin of Life and a professor in the department of Earth and space sciences, who studied the geology of the lotus burial lake; and Steven Karpowicz, a former UCLA graduate student in Merchant’s laboratory who is currently at Eastern Oregon University.

*Source: University of California (Published on May 10, 2013, slightly edited version)