*During the 2011 BioBlitz at Saguaro National Park Oct. 21-22, school children and volunteers teamed up with experts to embark on a 24-hour race to discover and tally as many of the park’s living creatures as possible in an effort to better understand the ecology and biodiversity of the Sonoran Desert.*

Under an afternoon sun that is beating down much too relentlessly for this time of year, our group of eleven is scrambling up a hillside in Saguaro National Park just west of Tucson.

What has brought us together is the 2011 BioBlitz, a two-day celebration of biodiversity organized by the National Park Service, National Geographic, the Arizona-Sonora Desert Museum and the Friends of Saguaro National Park. For two and a half hours, we get to be field biologists on a real science mission. 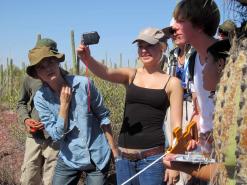 Our group is led by Elizabeth (Betsy) Arnold, one of more than a dozen University of Arizona scientists participating in the event. Throughout a 24-hour period, more than 100 teams like ours – comprised of experts, public volunteers and school children – are setting out to catalog the living creatures in this unique portion of the Sonoran Desert in a joint effort to explore the park’s mountains, valleys, cactus forests and washes to identify as many species as possible.

According to the organizers, the goals of the BioBlitz are to help scientists and the community understand the plants and animals living in the park and to connect children of all ages to the natural world.

Arnold is an associate professor in the School of Plant Sciences in the UA’s College of Agriculture and Life Sciences and serves as curator of the UA’s Robert L. Gilbertson Mycological Herbarium, one of Arizona’s major biodiversity collections.

“My research group is broadly interested in biodiversity,” she says. “We focus on one of the most diverse but perhaps least studied group of organisms – fungi. Specifically, we study endophytes, fungi that live inside plant tissues such as leaves and stems without causing disease.”

According to Arnold, about 100,000 species of fungi have been described. They include the familiar mushrooms, molds, yeast, and plant pathogens. Researchers put the actual number of fungal species somewhere between 1.5 million and 9 million species. 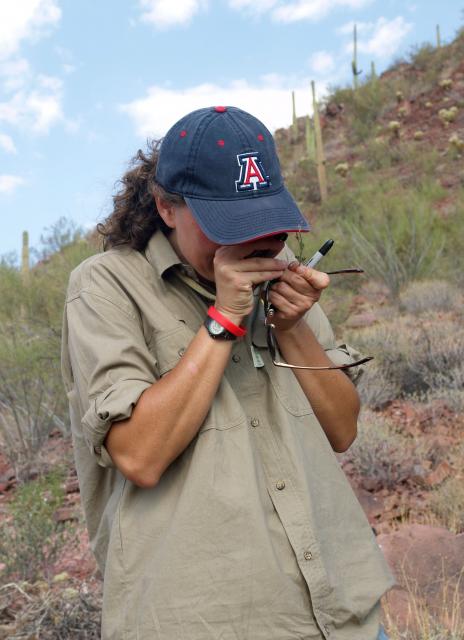 Only in the last 20 years have researchers begun to realize that every plant lineage contains endophytes inside their healthy, above-ground tissues, and typically many different species coexisting in the same leaf.

Led by a GPS device in the hands of Nick Massimo, who graduated from the UA this year and currently works as a research technician in Arnold’s lab, we arrive at our destination, a southwest-facing slope so hot and dry that even the saguaro cacti to whose abundance in the park owes its existence grow only sparsely here. 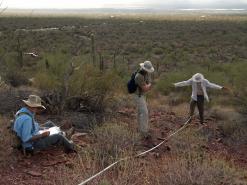 Arnold explains the purpose of our excursion: “We are going to collect healthy tissue from three common desert plant species that flourish in this relatively extreme environment: jojoba, creosote and palo verde. We have sampled several different species of desert plants in the areas around Tucson and Phoenix, but we have never had the opportunity to work in Saguaro National Park. This gives us the chance to assess the degree to which the endophytes we found in desert plants in other locations are unique and how they relate to those we find here in the park.”

Massimo divides the group into three teams. Using pruning shears, one team begins to clip off small twigs and places them into Ziploc bags. The second team is charged with collecting soil samples from underneath each plant sampled. These will help the scientists determine whether soil composition plays a role in the assemblage of endophytes living in a given host. The third group is responsible for assessing the diversity of plant species growing in the area and looks for invasive plants such as buffelgrass that might be present.

“Biologists estimate that about 1 million species of endophytes might exist on our planet,” Arnold says. “Less than 1 percent of those endophyte species have been described. Through comparative research that reaches from the tropics to the tundra, we want to understand the scale of this diversity, what mechanisms allow these fungi to coexist with their host plants and their distribution across the globe.” 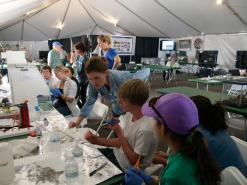 Inside the science tent, high school students prepare the plant samples they collected in the field to be tested for endophytes living in the plant tissue. Image credit: D. Stolte/UANews

“Plus, many endophytes produce compounds that could be useful in human health and sustainability,” she adds. “With collaborators we are assessing their applications in biofuels, biological control for agriculture, and pharmaceutical drug discovery.”

Arnold says that many endophytes provide benefits for the host, helping the plant survive severe drought, high temperatures or attacks from grazing animals or pathogens. In some cases, the fungi are not beneficial until their host plant comes under stress.

“In many cases, it’s a mutually beneficial relationship. The endophytes that help the plant in turn gain shelter from harsh conditions as well as the opportunity to complete their life cycles. In this process, they are consuming some of the carbon the plant makes during photosynthesis.”

After repeating the tasks at two more sampling sites nearby, our group starts hiking back to the base camp, a city of tents set up in the parking lot outside the park’s visitor center.

A steady stream of school buses is spilling hordes of school children onto the festival grounds, eager to hike out into the desert with a real scientist or to explore the booths lining the area.

One of the exhibitors is Lisa Haynes, who heads the UA Wild Cat Research and Conservation Center. An educational game featuring flashcards invites visitors to “guess the cat” and try and name the species pictured.

“Many may not be aware that 36 species of cats inhabit the world,” she explains, “four of which live in Arizona: bobcat, mountain lion, jaguar and ocelot.” 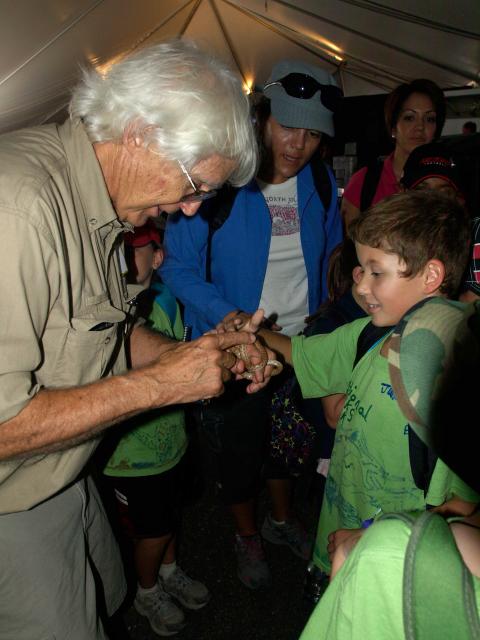 “It is amazing to see how many people are excited and enthused about wild cats. We are especially pleased with the interest generated by our Backyard Bobcat Photo Project, in which people can submit photos of their backyard bobcats through our website.”

Inside the science tent, scientists are peering into dissecting scopes and poring over reference guides picturing thousands of species of insects and other animals or plants. Rows of laptops with external hard drives line the tables, swallowing the incoming flood of photos taken during the species count outings.

Chattering middleschoolers throng the table of Cecil Schwalbe, a faculty member with the Wildlife and Fisheries Resources program in the UA’s School of Natural Resources and the Environment.

“Is it alive?” one of them asks, pointing at a gila monster lounging in its glass container, next to two desert tortoises and a leopard frog. “Yeah, of course!” his classmate replies. “Look how it’s flicking its tongue!”

Schwalbe is surrounded by a flock of children, and small hands are reaching up trying to touch the pale tan, delicate snake that is writhing around his wrist.

“This is a night snake,” he explains. “See how it has those vertical pupils? They look like cat’s eyes, don’t they? That tells you it’s a nocturnal snake that can see well in the dark.”

With a big smile on his face, he turns and says: “Look at this little guy here – he was very afraid at first, but then he overcame his fears and petted the snake. I love it when that happens.”

Across the tent, students and technicians from Arnold’s “Team Endophyte” group have set up a field laboratory station. They show high school students how to process the plant samples they collected during their field trip, how to cut them into small pieces, then wash and sterilize them.

“This way, we make sure that we cultivate only the fungi inside the plant tissue and not some other microorganisms that happen to be on the plant surface,” explains Dustin Sandberg, a master’s student in Arnold’s lab, who is sitting in front of a sterile hood, carefully placing the samples into small plastic tubes with growth medium.

“We are planning on culturing more than 8,000 tubes from the samples we collected at the BioBlitz,” Arnold says. “Most endophytes start growing within a few days, but some don’t grow for a year. With endophytes,” she says with a happy but rueful smile, “it’s short field time, but long lab time.”

“Over the coming months, we’ll post updates on Facebook for students and others who are following our progress. We’ll post some videos about what we’re doing at each step, and we’ll keep people appraised of how many different cultures we’re getting. Once we get enough growth we’ll extract DNA and sequence a part of the genome that helps evaluate how many and which species we have found. We expect to find many new genotypes and discover many new species here. We are really excited and can’t wait to see what those fungi do.”

Saguaro National Park was selected as one of only 10 National Parks in the BioBlitz series. Starting in 2007, one BioBlitz takes place each year in a different park, leading up to the National Park Service’s centennial in 2016.

According to Don Swann, who graduated from the UA with a degree in wildlife ecology and now works as a biologist with Saguaro National Park, the park is home to about 1,770 species of vascular plants and about 400 species of vertebrates.

“One reason we are doing the BioBlitz is to learn about organisms we know much less about – invertebrates, fungi, lichens,” Swann says. “It is a great opportunity to get as many species accounted for as possible.”

“The University has been a huge supporter of the park, and the research relationship goes back a long way. Many current park staff received their degrees from the UA, and many are still involved in the university community. It’s a natural fit. We have this beautiful park, but we only know about 20 percent of the species that live in it. The BioBlitz event brings out experts who help us engage the public in their public lands. It helps ensure we have people continue to be interested in the park and enjoy everything it has to offer.”

“Today we had high school students working with us, some as young as 10 and their parents, we had teams of citizen scientists – and in all cases they engaged in real science,” Arnold adds. “They had the opportunity to see that scientists are humans and we have to make decisions, we have to learn as we go, and we are enthusiastic about what we study. I think that enthusiasm became a shared, common thread, which is truly satisfying.”