AUSTIN, Texas – A team of scientists and engineers at The University of Texas at Austin has invented a powerful tool that rapidly and accurately identifies cancerous tissue during surgery, delivering results in about 10 seconds—more than 150 times as fast as existing technology. The MasSpec Pen is an innovative handheld instrument that gives surgeons precise diagnostic information about what tissue to cut or preserve, helping improve treatment and reduce the chances of cancer recurrence.

The research is described in the Sept. 6 edition of the journal Science Translational Medicine.

“If you talk to cancer patients after surgery, one of the first things many will say is ‘I hope the surgeon got all the cancer out,’ ” says Livia Schiavinato Eberlin, an assistant professor of chemistry at UT Austin who designed the study and led the team. “It’s just heartbreaking when that’s not the case. But our technology could vastly improve the odds that surgeons really do remove every last trace of cancer during surgery.” 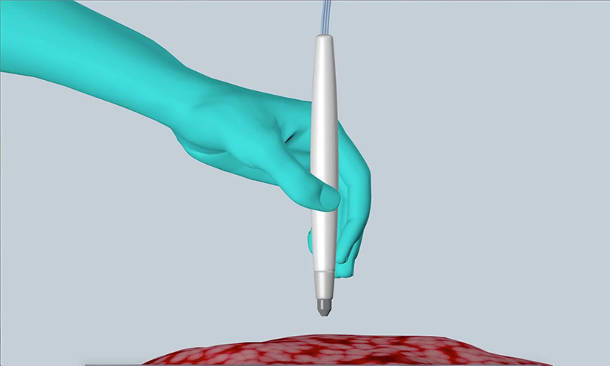 The MasSpec Pen rapidly and accurately detects cancer in humans during surgery, helping improve treatment and reduce the chances of cancer recurrence. Image credit: University of Texas at Austin

The current state-of-the-art method for diagnosing cancers and determining the boundary between cancer and normal tissue during surgery, called Frozen Section Analysis, is slow and sometimes inaccurate. Each sample can take 30 minutes or more to prepare and interpret by a pathologist, which increases the risk to the patient of infection and negative effects of anesthesia. And for some types of cancers, frozen section interpretation can be difficult, yielding unreliable results in as many as 10 to 20 percent of cases.

However, in tests on tissues removed from 253 human cancer patients, the MasSpec Pen took about 10 seconds to provide a diagnosis and was more than 96 percent accurate. The technology was also able to detect cancer in marginal regions between normal and cancer tissues that presented mixed cellular composition. The team expects to start testing this new technology during oncologic surgeries in 2018.

“Any time we can offer the patient a more precise surgery, a quicker surgery or a safer surgery, that’s something we want to do,” says James Suliburk, head of endocrine surgery at Baylor College of Medicine and a collaborator on the project. “This technology does all three. It allows us to be much more precise in what tissue we remove and what we leave behind.”

Although maximizing cancer removal is critical to improve patient survival, removing too much healthy tissue can also have profound negative consequences for patients: For example, breast cancer patients could experience higher risk of painful side effects and nerve damage, in addition to aesthetic impacts. Thyroid cancer patients could lose speech ability or the ability to regulate the body’s calcium levels in ways that are important for muscle and nerve function.

This research was accomplished by an interdisciplinary team, merging the fields of chemistry, engineering and medicine. Other main contributors include Thomas Milner, professor of biomedical engineering in UT Austin’s Cockrell School of Engineering and his lab members; Jialing Zhang, research associate at the Eberlin Lab at UT Austin who led the experimental work with other lab members; Anna Sorace, assistant professor at UT Austin’s Dell Medical School; Chandandeep Nagi and Wendong Yu, professors of pathology at Baylor College of Medicine, and Jinsong Liu, professor of pathology at University of Texas MD Anderson Cancer Center.

The team and UT Austin have filed U.S. patent applications for the technology and are now working to secure worldwide patents.

Living cells, whether they are healthy or cancerous, produce small molecules called metabolites. These molecules are involved in all the important processes of life—such as generating energy, growing and reproducing—as well as other useful functions such as removing toxins. Each type of cancer produces a unique set of metabolites and other biomarkers that act as fingerprints.

“Cancer cells have dysregulated metabolism as they’re growing out of control,” says Eberlin. “Because the metabolites in cancer and normal cells are so different, we extract and analyze them with the MasSpec Pen to obtain a molecular fingerprint of the tissue. What is incredible is that through this simple and gentle chemical process, the MasSpec Pen rapidly provides diagnostic molecular information without causing tissue damage.”

The molecular fingerprint obtained by the MasSpec Pen from an uncharacterized tissue sample is instantaneously evaluated by software, called a statistical classifier, trained on a database of molecular fingerprints that Eberlin and her colleagues gathered from 253 human tissue samples. The samples included both normal and cancerous tissues of the breast, lung, thyroid and ovary.

When the MasSpec Pen completes the analysis, the words “Normal” or “Cancer” automatically appear on a computer screen. For certain cancers, such as lung cancer, the name of a subtype might also appear.

In tests performed on human samples, the device was more than 96 percent accurate for cancer diagnosis. The team has also demonstrated that it accurately diagnoses cancer in live, tumor-bearing mice during surgery without causing any observable tissue harm or stress to the animals.

Physicians can operate the disposable handheld device easily. It requires simply holding the pen against the patient’s tissue, triggering the automated analysis using a foot pedal, and waiting a few seconds for a result. Meanwhile, the pen releases a drop of water onto the tissue, and small molecules migrate into the water. Then the device drives the water sample into an instrument called a mass spectrometer, which detects thousands of molecules as a molecular fingerprint.

The process is also low-impact for patients.

“When designing the MasSpec Pen, we made sure the tissue remains intact by coming into contact only with water and the plastic tip of the MasSpec Pen during the procedure,” says Zhang. “The result is a biocompatible and automated medical device that we are so excited to translate to the clinic very soon.”

Funding for this research was provided by UT Austin through the startup funds to Eberlin, as well as the National Cancer Institute of the National Institutes of Health and the Cancer Prevention Research Institute of Texas.