Bacteria are invisible to the naked eye, but they reside on nearly every surface humans encounter—including the skin.  Uncovering the role these microorganisms play in human health is a major focus of research in skin microbiology, but little is known about the identity or function of skin bacteria in other mammals.

In a paper published in the open access journal PLOS ONE, researchers at Woods Hole Oceanographic Institution (WHOI) and colleagues identified a core skin bacterial community that humpback whales share across populations, which could point to a way to assess the overall health of these endangered marine mammals.

“The skin is the interface between the animal and the ocean it lives in,” said lead author Amy Apprill, a microbiologist at WHOI. “By studying the bacterial species on the skin of humpbacks, we might be able to learn more about their health and the status of their environment.”

Apprill collected 56 skin samples from humpback whales from the North Atlantic, North Pacific and South Pacific oceans with the help of scientists at the Provincetown Center for Coastal Studies, Hawaiian Islands Humpback Whale National Marine Sanctuary and University of Hawaii at Hilo. The samples were obtained from biopsy collecting darts that bounce off the whales’ skin and also from skin that naturally sloughs off when whales breach.  Detailed population studies in these areas provided important details about the individuals involved, such as their age class and sex.

The research team sequenced and identified over 500,000 small-subunit ribosomal RNA genes from bacteria obtained from humpback whale skin and also compared the data to bacterial sequences found on the skin of deceased whales and whales with injuries and compromised health, such as those entangled in fishing line. 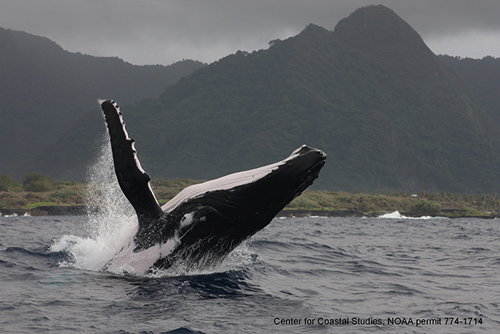 Analysis of skin samples revealed an abundance of two core groups of bacteria­ specific to humpbacks—Tenacibaculum and Psychrobacter.  The overall composition of the bacteria differed by geographical location and metabolic state, as well as in stressed and deceased individuals. In stressed and deceased whales, researchers found less of the two core bacteria and more potential pathogens present.

“There always seems to be this core group of bacteria that attach to the whale skin,” said Tracy Mincer, a microbiologist at WHOI and coauthor of the study. “When that core group starts to shift, such as in the case of individuals with compromised health, we saw other bacteria—potentially harmful bugs such as anaerobes, which are common in human skin diseases —showing up.”

Humpback whales are oceanic nomads that travel thousands of miles during their seasonal migration, also coming into contact with numerous bacteria and other microbes along the way.

“As very large animals, they have a huge skin surface with a lot of nutrients for microbes to live on and attach to,” Mincer said. “How do they control their skin from looking like a ship hull? How do they stay smooth and shiny?” 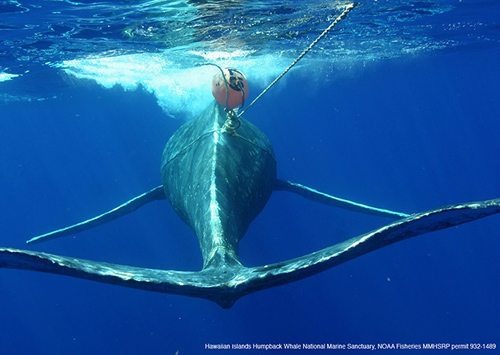 This humpback whale was entangled in fishing gear during its entire migration from the Bering Sea (off Alaska) to Hawaii, and the bacteria residing on skin of this and other entangled or deceased whales were found to contain fewer core members and more potential pathogens than the healthy animals. Image and sample taken courtesy of Edward Lyman, Hawaiian Islands Humpback Whale National Marine Sanctuary and NOAA’s Marine Mammal Health and Stranding Response Program, Permit #932-1489. (Hawaiian Islands Humpback Whale National Marine Sanctuary)

Researchers aren’t sure yet how the core bacteria are interacting with the whales or each other. “The next step is to figure out what the core bacteria are doing—and if they’re doing anything that benefits the whales,” Apprill said. “There’s a spectrum of things they could be doing, such as keeping the whale clean of fouling organisms or producing antibiotics to fend off potential pathogens.”

Figuring out the specific role of the core bacteria will be the next step in this important research that could eventually aid in efforts to monitor population health and conservation status of threatened or endangered marine mammals.

“Large whales are difficult to study in the wild, and assessing their health is both important and challenging,” said Jooke Robbins, a coauthor and director of humpback whale research at Provincetown Center for Coastal Studies. “This study provides the first baseline on the ‘normal’ composition of skin bacteria across ages, sexes, populations and habitats. It is an important step toward a quantitative tool for assessing whale health and, potentially, impacts from human activities.”

“This work represents a productive blend of fundamental and applied research,” said Michael Moore, director of the WHOI Marine Mammal Center, which funded the work. Researchers from the Marine Biological Laboratory, The Dolphin Institute, and the International Fund for Animal Welfare also contributed to the study.