MELBOURNE, Australia: Scientists from IBM Research, the University of Melbourne and the University of Queensland have moved a step closer to identifying the nanostructure of cellulose – the basic structural component of plant cell walls.

Tapping into the IBM Blue Gene/Q supercomputer at the Victorian Life Sciences Computation Initiative (VLSCI), researchers have been able to model the structure and dynamics of cellulose at the molecular level. The insights could pave the way for more disease resistant varieties of crops and increase the sustainability of the pulp, paper and fibre industry – one of the main users of cellulose.

The work, which was described in a recent scientific paper published in Plant Physiology, represents a significant step towards our understanding of cellulose biosynthesis and how plant cell walls assemble and function. The research is part of a longer-term program to develop a 3D computer simulated model of the entire plant wall. Globally, IBM is a leader in the field of computational biology – the interface of information technology and biology through which scientists are exploring ways to improve crop yields, increase food traceability and secure supply chains. 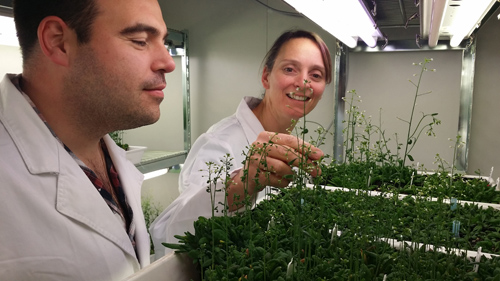 Cellulose represents one of the most abundant organic compounds on earth with an estimated 180 billion tonnes produced by plants each year. A plant makes cellulose by linking simple units of glucose together to form chains, which are then bundled together to form fibres. These fibres then wrap around the cell as the major component of the plant cell wall, providing rigidity, flexibility and defence against internal and external stresses. Until now, scientists have been challenged with detailing the structure of plant cell walls due to the complexity of the work and the invasive nature of traditional physical methods which often cause damage to the plant cells.

“This is a pioneering project through which we are bringing IBM Research’s expertise in computational biology, big data and Smarter Agriculture to bear in a large-scale, collaborative Australian science project with some of the brightest minds in the field. We are a keen supporter of the Victorian Life Sciences Computation Initiative and we’re very excited to see the scientific impact this work is now having,” said Dr. John Wagner, Manager of Computational Sciences, IBM Research – Australia.

Using the IBM Blue Gene/Q supercomputer at VLSCI known as Avoca, scientists were able to perform the quadrillions of calculations required to model the motions of cellulose atoms. The research shows that within the cellulose structure, there are between 18 and 24 chains present within an elementary microfibril, much less than the 36 chains that had previously been assumed.

Cellulose is a vital part of the plant’s structure, but its synthesis is yet to be fully understood,” said Dr. Monika Doblin, Research Fellow & Deputy Node Leader at the School of BioSciences at the University of Melbourne. “It is really hard to work on cellulose synthesis in vitro because once plant cells are broken open, most of the enzyme activity is lost; so we needed to find other approaches to study how it is made. Thanks to IBM’s expertise in molecular modelling and VLSCI’s computational power, we have been able to create models of the plant wall at the molecular level which will lead to new levels of understanding about the formation of cellulose.”

“Plant walls are the first barrier to disease pathogens. While we don’t fully understand the molecular pathway of pathogen infection and plant response, we are exploring ways to manipulate the composition of the wall in order to make it more resistant to disease,” said IBM Researcher, Dr. Daniel Oehme.

The work was undertaken by biologists at the Australian Research Council (ARC) Centre of Excellence in Plant Cell Walls within the universities of Melbourne and Queensland, in partnership with the IBM Research Collaboratory for Life Sciences. Housed in the University of Melbourne’s Victorian Life Sciences Computation Initiative, the Collaboratory enables IBM and university researchers to work side by side on research in the areas of medicine and computational biology.

To find out more about the Australian Research Council Centre of Excellence in Plant Cell Walls visit: https://www.plantcellwalls.org.au/

To find out more about the Victorian Life Sciences Computation Initiative visit: https://www.vlsci.org.au/