MINNEAPOLIS / ST. PAUL — An international team of scientists drilling deep under the bed of the Dead Sea has found evidence that the sea may have dried up during a past warm period similar to predicted scenarios for climate change in coming decades. Emi Ito, professor of earth sciences in the University of Minnesota’s College of Science and Engineering, is a research team member.

With nations in the volatile region already running short on water, the finding could be a warning of worse shortages to come, the researchers said. The lakebed cores, which contain about 200,000 years of environmental history—the Mideast’s longest archive—also record earthquakes and other natural phenomena, and may shed light on human development and current seismic risks. The preliminary results were presented today at the American Geophysical Union’s fall meeting in San Francisco.

Spanning Israel and Jordan, the Dead Sea is the world’s lowest-lying place on land, with shores some 1,400 feet below sea level and salty waters going down another 1,200 feet. Fed by the Jordan River, it has shrunk rapidly over past decades as Syria, Israel, Jordan and the Palestinian Authority pull water for farming and other uses. 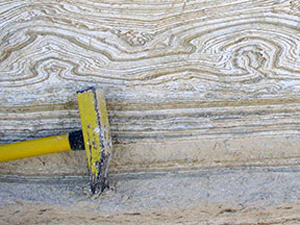 A section of exposed sediments along the shoreline of the Dead Sea exposes layers set down in wet and dry seasons when the lake was much higher. The crumpled zone represents disruptions from earthquakes. Image credit: Photo: Adi Torfstein

Near the sea’s center, under 900 feet of water, the team penetrated some 750 feet of muddy sediment, then hit a layer of nearly pure pebbles, underlain by some 120 feet of salt. The salt suggests to them that the lake dried quickly, precipitating out solids. The pebbles appear to be a beach—given their position near the middle, a signal that the sea more or less disappeared. Research by others has already shown that the sea has fluctuated, but this is the first time anyone has found that it actually disappeared.

The cores have not yet been precisely dated, but the researchers have correlated some layers with isotopes found in Mideast cave deposits, and believe the total drying took place around 125,000 years ago, which was at the height of a warm period between the two most recent ice ages, when the Mideast is already known to have been not only warmer, but drier, than today. Climate projections say that if the world keeps warming as it is now, the Mideast could return to this more arid state within decades.

“The Dead Sea level is currently decreasing very quickly because humans are using all of the fresh water sources,” said Steven Goldstein, a geochemist at Columbia University’s Lamont-Doherty Earth Observatory and one of the project leaders. “The evidence it has dried down in the past, without any human intervention, means that the water that is currently flowing and completely used actually stopped running. If forecasts of increasing aridity turn out to be correct, such conditions could return soon.”

Reports by the United Nations and other bodies have cited water as a potential spark for future Mideast conflicts. In the past, the governments of Egypt and Jordan have said that they would never go to war again against Israel—except over water.

“The Dead Sea has witnessed much of human history, from the migration of early humans out of Africa and habitation by early Stone Age people, all the way to the Near East politics of today,” said Ito. “To think that we, the humans, are helping it perhaps dry up, is very sobering.”

Ito said the Dead Sea water level has been going down by 3 to 5 feet each year due to a combination of dry climate of the region and human activity. Jordan River’s water is heavily used for irrigation and little is left to flow into the Dead Sea. If the previous warm period before the last ice age is any guide, the region is going to become drier and drier under warming climate, she said.

The Dead Sea’s basin is a plate boundary like the San Andreas fault in California, and the cores also contain a detailed log of past earthquakes there. When quakes occur, typically flat layers of sediment are twisted into convoluted shapes. With precise dating, these should form a history from ancient times to the present, and perhaps give a better picture of future risks faced in the region. It could also help answer longstanding questions. For instance, some say the Biblical overthrow of the walls of Jericho was performed by an earthquake—but whether such a quake took place, and when, has remained controversial. The research team is now in the process of doing more precise dating.

The drilling, some 10 years in the making, was done by investigators from Israel, the United States, Germany, Japan, Switzerland and Norway, under the auspices of the International Continental Scientific Drilling Program, which sponsored the project. The rest was funded by agencies and institutes from the participating countries. U.S. funding came from the National Science Foundation.

In addition to Goldstein, the project leaders are Zvi ben Avraham of Tel-Aviv University and Mordechai Stein of the Geological Survey of Israel. Other team members come from the GFZ German Research Center for Geosciences; Hebrew University of Jerusalem; Swiss Federal Institute of Technology in Zurich; International Research Center for Japanese Studies in Kyoto; and University of Minnesota. The team is hoping to involve scientists from Palestine and Jordan as well.