Whether it’s fake news, alternative facts or post-truth, debates around the meaning of objective facts and truth dominate the national conversation.

Many scientists are veterans of such battles, forced to argue during the past decade for the validity of research on climate change, vaccines and genetically modified crops. Such challenges only appear to be growing, prompting the American Academy of Arts & Sciences to bring together scientists to discuss how to re-establish the authority of science and strengthen its influence on policy and public opinion.

The University of Chicago hosted a Feb. 20 event, “Communicating Scientific Facts in an Age of Uncertainty,” as part of the Academy’s ongoing initiative to address the relationship between the scientific community, policymakers and the public. Formally the 2,051st stated meeting of the Academy, the event centered around a panel of faculty from medicine, the social sciences and astrophysics grappling with how to convey the complexity and debate inherent in the scientific method for audiences that prefer simple and declarative solutions. 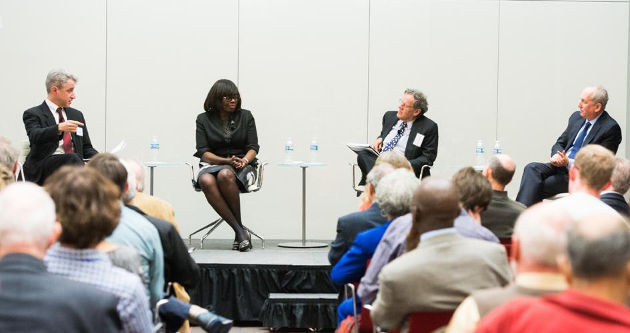 President Robert J. Zimmer in his introductory remarks spoke of the tension between the “intrinsic uncertainty” of the development of science and a public that often expects yes or no answers. Though the Academy dates back to the 18th century, its current president Jonathan F. Fanton speculated that the present pessimism and urgency about science’s role in society was unlike any point in the organization’s long history.

“We all agree that science’s insights continue to transform our lives,” said panelist Arthur Lupia, a professor in political science at the University of Michigan. “Given the range and influence of science in the world today, you’d think that science’s future as a generator of social value would be very bright. But it doesn’t feel like that, does it?”

Lupia and UChicago panelists Olufunmilayo I. Olopade, the Walter L. Palmer Distinguished Service Professor of Medicine and Human Genetics, and Robert Rosner, the William E. Wrather Distinguished Service Professor in Astronomy and Astrophysics and Physics, identified the proliferation of information online and human psychology as factors in the increasingly shaky ground for truth. The Internet creates extra competition for scientific thought, while feeding the innate tendency of people to accept ideas that match their own beliefs.

“One of the challenges of really dealing with human beings who have suffered through loss or suffering from a disease, is when they’re looking for explanations for what went wrong. They’re looking for something to hold on to,” Olopade said. “When you have a serious illness, you’re looking for answers, and you are comforted by the ones that best explain what you think has happened to you.”

Lupia, the author of the book Uninformed: Why People Know So Little About Politics and What We Can Do About It, described the process with a cognitive science term: motivated reasoning. Because people will inflate information consistent with their point of view and reject or ignore facts that challenge their beliefs, scientists need to better understand their audiences and their concerns in order to be heard, he said.

“This means rigorously pursuing the intersection between the content of your science and the problems that are most important to a target audience,” Lupia said. “If I could tap into someone’s core concerns—the things that they worry about when they’re walking from room to room, or when they go to sleep at night, or when they look at their children—and I can find a link between my science and their core concerns, I would have a better chance at an audience.”

The panel agreed that scientists must get better at explaining their findings in terms that explicitly connect with the personal lives of non-scientific audiences. Olopade suggested that conversations about the purported link between vaccines and autism could be shifted to emphasize the suffering once caused by polio, measles and other diseases that vaccines have made rare or non-existent.

“We need to change the conversation. We need to understand the worldview of the people who are rejecting science-based public policy,” said Eric Isaacs, executive vice president for research, innovation and national laboratories. “What are their concerns? What are their fears? And what can we offer to them that will meet their needs?”

Despite the challenges, the speakers insisted that scientists must engage more in conversations—both online and offline—to promote critical thinking and push back against non-scientific reasoning. Olopade pointed to online patient groups in which fraudulent claims can quickly spread as desperate individuals seek answers, and “grief can turn into activism and advocacy.” Empathic and accurate information from physicians and scientists can inform and reassure these patients, as well as guide advocacy towards legitimate treatments and research.

“I think the conversation that scientists ought to be having is, how do we get our voices out there more often so that we can amplify the voice of science,” Olopade said. “Scientists can’t take it for granted that, because we have done the research, everyone is going to accept it as gospel truth.”