Scientists Coax Shy Microorganisms To Stand Out in A Crowd

The communities of marine microorganisms that make up half the biomass in the oceans and are responsible for half the photosynthesis the world over, mostly remain enigmatic. A few abundant groups have had their genomes described, but the natures and functions of the rest remain mysterious.

Understanding how the changing global environment might affect these important ecosystem players is like trying to understand how the United States works when you can only discern Texas and California while many other states remain indistinct and you only suspect the existence of ones the size of Rhode Island and Delaware.

Now University of Washington scientists have advanced a method that allowed them to single out a marine microorganism and map its genome even though the organism made up less than 10 percent of a water sample teeming with many millions of individuals from dozens of identifiable groups of microbes.

Typically researchers have had to isolate an organism and culture it in a  lab before they could begin to crack its genome.

“We’ve done the opposite,” said Vaughn Iverson, a UW doctoral student in oceanography and lead author of a report in the Feb. 2 issue of the journal Science. 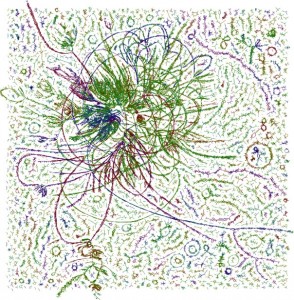 A graphical view of tens of millions of bases of DNA extracted from a marine microbial community found in Puget Sound, reveals the entangled genomes of bacteria, archaea and viruses. Scientists extracted 2 million of these to map the genome of one particular marine microorganism that had defied investigation. Image credit: V Iverson/U of Washington

“We went to the environment, didn’t make any attempt to isolate any of the organisms in a laboratory sense and, instead, extracted the DNA from everything in the sample,” he said. “It’s a technique known as metagenomics. The UW’s innovation was to develop computational methods to simultaneously sequence all the parts and then reconstruct the chosen genome.”

The researchers determined the genome of a member of the marine group II Euryarchaeota, something that has defied investigators since those microorganisms were first detected about a decade ago. They are found widely across the world’s oceans so – although not always abundant – biologists assume they have some important function, said Virginia Armbrust, UW professor of oceanography and corresponding author on the Science paper. The resulting genome offers hints that Euryarchaeota might serve as a kind of cleanup crew after diatoms, another ocean microorganism, bloom and die.

The genome also clarified the origin of a gene that allows marine group II Euryarchaeota, as well as many marine bacteria, to harvest energy directly from sunlight, with no photosynthesis involved.

The approach advanced by the UW team isn’t just useful for studying microorganisms in the oceans, but also for those found in soils and algal communities with potential for biofuels, or for understanding emerging strains of antibiotic-resistant bacteria that threaten human or animal health, Iverson said. The UW approach takes less time and money. 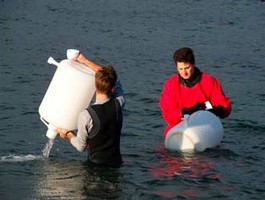 “Having to culture things to sequence them is an extra step and time consuming if they’re difficult to culture,” he said. “It becomes a chicken and egg problem. If you have never been able to study it, you don’t know what it needs. But in order to study it, you must provide the environment in the lab that it requires.”

“If microbiologists can get the DNA directly and sequence it without having to culture it, that’s a big advantage.”

Metagenomics – extracting DNA from whole microbial communities and sequencing it to reveal genes – has been used for about a decade with marine microorganisms. Sequencing equipment and methods have leapt forward since then, thanks to many researchers and companies, the UW scientists said.

But previous techniques allowed scientists to reconstruct an organism’s genome only if the organism made up a third or more of a sample. The UW team showed how to construct the genome of marine group II Euryarchaeota even though it comprised only 7 percent of the cells found in 100 liters of water from Puget Sound near Seattle.

The sample was analyzed using equipment purchased with funding to Armbrust from the Gordon and Betty Moore Foundation, which also paid for Iverson’s work. The project was conducted in labs run by Armbrust and co-author Robert Morris, a UW assistant professor of oceanography. Other co-authors are Christian Frazar, Chris Berthiaume and Rhonda Morales, all with the UW.

“Now you can afford to get things that are a much smaller fraction of your overall sample,” Iverson said. “That’s what’s really new – to assemble something with a genome that is not closely related to anything else that is known, so there are no templates or references to work from, and to discern organisms making up less than10 percent of a sample from a complex community.”