SBRT Can Be a Lifesaver for the Right Patients

Radiation delivered in high doses with pinpoint precision is becoming a useful tool for some patients who are otherwise running out of options.

Roy Decker, MD, PhD, keeps a photograph in his desk drawer of a woman in her 80s with the horse she still loves to ride. It’s a testament to life after lung cancer.

In 2008, doctors told the woman she was not a candidate for surgery and there was nothing else they could do. Then she found her way to Yale and became one of the first patients here to be treated with stereotactic body radiotherapy (SBRT), which delivers high doses of radiation with pinpoint precision. Just a few treatments wiped away her disease.

“We had a number of patients who were written off, early on, and just told nothing was possible,” says Dr. Decker, who keeps the patient’s picture at his desk. 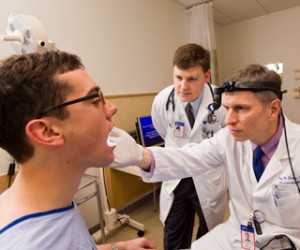 Five years later, Yale’s SBRT program has grown and takes referrals from throughout the state. It has a relatively small caseload of 100-120 carefully selected patients a year, mostly with lung tumors, and there is still much to learn about the long-term results. But early results are impressive—in five years, the success rate for patients with lung tumors was 80 to 90 percent.

Yale’s recently expanded SBRT program uses two types of treatments. Most patients are treated with a linear accelerator-based machine that delivers radiation in an arc that sweeps 360 degrees around their body, a process that takes about 30 minutes. The program recently acquired a Cyberknife machine, which has a robotic arm that moves around the patient to target the tumor from hundreds of angles.

Dr. Decker uses mostly linear accelerators to treat patients with small early stage lung cancers and carefully selected patients who have metastatic tumors. “We have a lot more experience than many other centers in treating situations that are considered high risk—tumors that are close to the central airways,” Dr. Decker says. 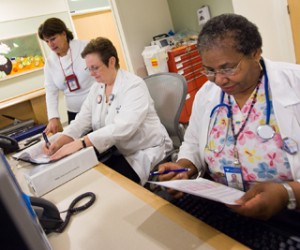 Mary Starno, left, works with staff on a case. Photo by Robert Lisak

Meanwhile, Veronica Chiang, MD, a neurosurgeon, and James Yu, MD, a therapeutic radiologist, are using the technique to treat a small number of spinal tumors, which require even more precision and involve a single dose of radiation. “There is still lot to learn about non-palliative indications for SBRT treatment for spinal tumors,” Dr. Chiang says. “But for those who come with pain as a symptom of their spine metastases, SBRT results in faster pain relief—and more patients get longer lasting relief—than with standard spine radiation.”

Therapeutic radiologist Bryan Chang, MD, has started to use the technique to treat carefully selected patients with liver tumors, including primary liver tumors and cancer that has metastasized from other parts of the body. “Cancer that has metastasized is generally thought of as being incurable,” Dr. Chang says. “But we know that in certain selected cases, we can treat one or two tumors in the liver with radiation, and the patient will survive a long time or even potentially be cured. That is a fairly radical shift in thinking. In terms of treating metastatic disease, there clearly is potential for SBRT as chemotherapy continues to improve, making local control of sites like the liver more important to patient survival.” 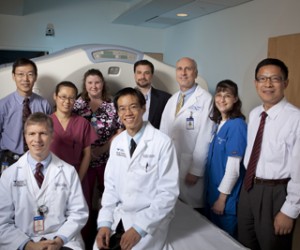 A staff of four physicians, seven nurses, three PhD physicists, 15 dosimetrists and 22 radiation therapists work closely together to plan treatment then deliver radiation treatments—usually 3 to 5 treatments compared to 30 or 40 for traditional radiation. For any one case there are as many as seven specialists involved. “The planning is very labor intensive, as is the quality assurance,” says Mary Starno, chief radiation therapist. “We only have one shot.”

There are still many questions to be answered about such matters as patients’ tolerance for high doses, SBRT’s effectiveness for patients with advanced disease, and the increasing number of patients choosing SBRT as an alternative to surgery, not just as a last resort. “For a lot of patients, the precise role of SBRT still hasn’t been clearly defined. It’s still part of our research,” Dr. Decker says.

But many patients have been happy to have the option. Shannon Dingus, a radiation therapist, says patients usually end up appreciating the simplicity of the treatment itself. “In short periods of time, doctors and researchers have come up with things that are amazing. They’re really thinking about the patient as a person.”