Saving lives and limbs: 30 years of interventional cardiology at Yale

Three years ago, Richard Kenney of Branford, Connecticut noticed he was getting winded when he climbed a flight of stairs or tried to go for a walk. “I had a heart murmur, but I was also getting short of breath,” said the retired octogenarian and former business owner.

Kenney paid a visit to his cardiologist, Dr. Michael Cleman of Yale School of Medicine, who conducted tests and concluded that one of Kenney’s heart valves needed to be replaced. But Kenney had undergone open-heart surgery a decade earlier, making another major procedure risky. Cleman suggested a less invasive solution pioneered by interventional cardiologists and cardiac surgeons.

The procedure — transcatheter aortic valve replacement (TAVR) — involves using a catheter inserted in the groin to deliver a replacement valve to the heart. Instead of undergoing major surgery followed by days in the hospital and weeks of recovery at home, Kenney would need only minimal treatment time. “I went in one day, had the procedure done that day, and came home the next with a new valve,” he recalled. Today, Kenney breathes easy and takes regular walks. “I’m doing fine,” said Kenney, who recently returned from a cruise in France. 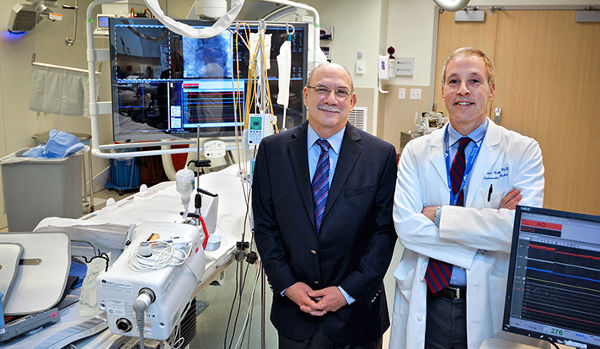 Dr. Michael Cleman and Dr. Henry Cabin, photographed in the Cardiac Cath Lab, launched a fellowship for interventional cardiologists at Yale in the mid-1980s. The program celebrates its 30th year in April. (Photo by Michael Marsland / Yale University)

The treatment that allowed Kenney to return to his active lifestyle is a prime example of what the interventional cardiology program at Yale has done for three decades — apply the most cutting-edge nonsurgical techniques to make critical interventions that save lives.
Innovating interventions

When the interventional cardiology program was first developing at Yale in the mid-1980s, procedures like TAVR were not even imaginable. Cleman, along with Dr. Henry Cabin, now chief of the cardiology section, were just beginning to perform nonsurgical repair of blood vessels, otherwise known as angioplasty. “This was at a time when the only treatment for coronary disease was bypass surgery,” said Cabin. “Angioplasty was just getting started, and it had many issues.”

Among those issues were bigger, clunkier catheters — the hollow tubes inserted in an artery and threaded up to the heart to open a blockage. Back then, in 10%–15% of cases, the narrowed artery would close during the procedure, resulting in an emergency bypass. “We didn’t have stents; we didn’t have anything to prop the vessel open,” Cabin said. “That was 1985 angioplasty.”

Initially, Cabin and Cleman performed a limited number of individual angioplasties on their own. After about a year, they decided to teach young cardiologists how to perform the procedure through a fellowship program. “As better equipment became available, we were able to serve a larger group of patients,” said Cleman, professor of cardiology and director of the Cardiac Catheterization Laboratory. “We ended up creating a fairly large referral service and building the program over time.”

The Yale team has since been at the forefront of angioplasty advances. They were the first in the Northeast to perform angioplasty using the original stent, known as the Palmaz-Schatz stent, said Cleman, and among the first to use the rotoblator — a catheter designed to restore blood flow by spinning and grinding away at plaque built up along artery walls.

The next big leap, said Cabin, were drug-eluting stents, which are stents coated with a drug that helps prevent reblockage, or restenosis, of blood vessels after treatment. Yale had the highest enrollment of patients for the first-generation drug-eluting stent trials. Drug-coated stents have dramatically reduced the restenosis rate from 25% to 5%, Cabin noted.

“So angioplasty went from being a risky procedure only performed on very stable, relatively healthy patients” to a lifesaving technique for patients in full cardiac arrest, he said.
New directions in cardiology

Today the interventional team offers a full suite of procedures that continue to expand and shape the field. Cabin points to two key growth areas: valve replacement to treat structural heart disease (which is what Kenney received) and angioplasty for peripheral vascular disease.

In the past, valve problems were all treated surgically, said Cleman. An alternative to surgery was aortic balloon valvuloplasty, but reblockage occurred in all cases. About eight years ago, the Yale team became interested in TAVR and currently performs approximately 200 such procedures per year.

“We’re far and away the biggest center in Connecticut doing it,” said Cabin. To improve and refine TAVR, they are currently investigating further advances in TAVR design and implant techniques — such as a repositionable valve, self-expanding valve, and other devices — through clinical trials. The area of major advancement in structural heart disease has now turned to mitral valve interventions. Yale will be a major contributor in the advancement of this procedure, note the physicians.

Similar to heart disease, peripheral vascular disease is caused by blockages in blood vessels in the extremities — arms and legs. Without treatment, the reduced blood flow can lead to amputations. The interventional team has applied the same tools used to treat heart disease — angioplasty using catheters, wires, balloons — to open the narrowed vessels and save limbs. “It’s a massive step forward in reducing amputations and changing peoples lives,” Cleman noted.

Envisioning the next big thing

With 90 clinical trials in the works, Yale’s interventional cardiology team is poised to be at the vanguard of advances in the field. Various inventions have come and gone but the nonsurgical approaches have stood the test of time, said the surgeons. After all, angioplasties that were once perilous procedures are now more routine than bypasses, said Cabin, and surgery for valve replacement may also become a thing of the past.

“Interventional cardiology is addressing more and more diseases that have been approached surgically with percutaneous (through the skin) techniques, and I think that trend will continue,” said Cleman.

The next development may be applying interventional strategies not just to treat conditions but to prevent them. “Right now, what we’re doing is being reactive,” said Cabin: opening clogged arteries, replacing impaired valves, and restoring failing hearts. But, he added, “Are there going to be ways of using devices to prevent events from happening? Is there a role for these techniques to stabilize an arterial wall or to pacify an area that’s inflamed? That’s one frontier.”