Run-up to revolution: Early American history seen through the stage in Odai Johnson’s book ‘London in a Box’

The true cultural tipping point in the run-up to the American Revolution, writes University of Washington drama professor Odai Johnson in his new book, might not have been the Boston Tea Party, the British naval blockade or even the First Continental Congress.

Rather, Johnson suggests in “London in a Box: Englishness and Theatre in Revolutionary America,” it was that Congress’s decision in late October of 1774 to close the theaters in British America.

“To close them was a small and radical act of the Continental Congress among far weightier measures,” he writes, “but a hard shot across the bow of British culture.”

The book was published in late spring by University of Iowa Press. The work “offers extraordinarily well-written, engaging prose that tells compelling stories about early America and Atlantic theater and the social worlds in which it traveled,” wrote reviewer Peter Reed of the University of Mississippi. Another reviewer praised its “wit and grace,” adding, that Johnson’s narrative voice “is reminiscent itself at times of an 18th century novelist.”

Johnson, a professor of theater history and head of the School of Drama‘s doctoral program, answered a few questions about the book.

Q: Set the scene for us, if you would — it’s 1774 in the thriving British-American colonies. Theater of the day is, as you write, “a quintessential salon of civility” and “the single greatest school for manufacturing Britishness.” Why was this, and why was it so popular? 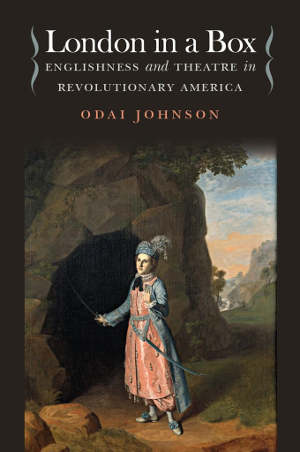 Odai Johnson: At no point in America’s long history were we Americans more British than on the eve of the Revolutionary war. Discontents were present, but there was not yet the re-fashioning of national identity that would make British-Americans into Americans. Its hard for us to imagine our way back before that charismatic event of 1776, but colonies just didn’t declare independence in the 18th century. Even the long tradition of rebellions — Irish, Scots, Indian uprisings, slave uprisings — were uniformly unsuccessful.

The idea of resisting the British empire was truly radical, and the idea of abandoning it in favor of “independency” was enormously brave and frightening. What kept British-Americans British was a large investment in shared culture. And for that, London was the capital. It was the center of trade, of education, of the arts, and of all the arts, nothing was more British, more the concentrated center of culture, than the theater.

Q: Plays staged by actor-manager David Douglass were, as your book title expresses, “like London in a box,” bringing these rustic early American “closer to the urbanity” of that city. Could you tell a bit about Douglass, his company and his place in history?

David Douglass, the Scottish actor and manager was the founder of American theater. He ran his “American Company” of actors in the British colonies and the Anglophone Caribbean from 1757 to 1777. He arrived in New York in 1758, built and operated a chain of theaters all across the colonies, and at no point was he more successful than when the war broke out and he and his company retired to Jamaica to sit out the hostilities.

At that point, early 1775, he owned seven theaters from Charleston, South Carolina, to New York City. He had collected a base of patrons that included the wealthiest and most influential clients on the continent — plantation owners, the British governor and signers of the Declaration of Independence. It is not hyperbole to claim of Douglass that he was the most well-connected man in America.

Q: The Founding Fathers, it seems, were big theatergoers. You write that then-Colonel George Washington subscribed to and attended several of Douglass’s theaters, and Virginia Assemblyman Thomas Jefferson often spent half of his 15-shilling per diem at the theater daily. What drew them so?

We are fortunate to have memorandum books for a few high-profile theater goers. Washington was a regular in the theater, attending some years four of Douglass’ theaters — in Annapolis, New York, Williamsburg and Alexandria — while Jefferson, as a young burgess in Williamsburg at court season could attend the theater six nights out of seven.

It was a place, of course, to be seen, but also, we forget, actors were among the most mannered people (at least on stage), and so for learning how to conduct oneself as well; manners, poise, polish, actors were modeling high culture. Even the language of the stage so deeply informed this revolutionary generation. If one reads Jefferson’s original Declaration of Independence with the stage in mind, it all sounds cribbed from a good tragedy, with King George the Macbethian “tyrant of the Earth.” Jefferson had clearly eaten of the tragic fruit!

Q: Everything changed in October of 1774 when the Continental Congress voted to close the British theaters. What was the reaction it the early American theater world? What became of the actors?

Wars, of course, are always bad on the theater season. But if we read these times not from 1776 and everything that happened afterward, but from the uncertainty of late 1774 and early 1775, we begin to appreciate how inconceivable war with Great Britain was to most British Americans.

Surely there would be some compromise. Concessions would be made, the rhetoric would all ratchet down, trade would resume, theaters would re-open.  But of course none of that happened. The actors watched, waited, and were actually in New York while war preparations were hastily being made. None of them chose sides, instead they sailed off to Jamaica to wait out the uncertainty of it all.

Q: At the close of 1774, you write, “New York, and indeed all the colonies were a powder keg, and the maniacs had all the matches.” Anyone not publicly supporting the rebellion, you quote a correspondent of the time, “is a Tory and subject to tar and feathers.” A sense of personal danger comes through your story at such times — was this indeed a dangerous time for the average person?

It’s a handy reminder, in our own divided times, just how deadly it could be to own the wrong positions in the wrong company. Neutrality was not an option; positions had to be declared. It divided families, broke up long friendships, forged new political divisions and communities and utterly re-mapped the social landscape of America.

What I find curious as a scholar of performance is the way the very last plays produced in America already anticipated the breaking off ties. Eight of the last 10 plays Douglass produced all dramatized the dangers of rebellion and the costs of political turmoil — from Shakespeare’s King John and Julius Caesar to Joseph Addison’s Cato — the play that gave so many American rebels their language of tragic sacrifice. It would have been quite chilling to witness the staging of rebellion and the failed subject-Monarch contracts, over and over, just before the war broke out.

Q: In this violent new “world turned upside down,” you write: “Of course, there would be no more theater,” adding that this was not the frivolous concern it may seem. What was the effect on culture? How long did it take a new American theater to arise?

This was a problem that has not been fully explored. Theaters were British — all the plays were British, the actors were British trained. There was no American theater at the time of the Revolutionary war. And so when the war was over, America emerged as a nation among nations, and the actors returned, but they had no story of consequence to tell.

It would be into the 19th century before the first serious American playwrights would emerge. That gap is very revealing, because one can measure how deeply British the Americans were before the war by how little new culture emerged immediately after it. It took a while — Ralph Waldo Emerson was still complaining about the want of distinctly American voices well into the 1840s.

Q: Finally, in your preface you mention a history of early England by medieval scholar John Capgrave, who left pages in his book blank for subsequent scholars to fill in, and write that you could easily do the same, “to fill in the many gaps and speculations.” What gaps remain to be filled in this history?

What’s left to do: For all the influence that David Douglass, being so public a figure, so well known and so well connected, insinuated in so many social circles, he left very little about himself as a private person. I was years tracking whatever I could find of him — but apart from legal documents and newspaper op-eds, he left no letters, no private correspondence of his life. And the same is true for most of his company of actors. They left little of their own lives behind. So well-known and so unknown.