Now, researchers at the Carnegie Institution’s Geophysical Laboratory, with colleagues,** have unexpectedly found that the transition temperature can be induced under two different intense pressures in a three-layered bismuth oxide crystal referred to as “Bi2223.” The higher pressure produces the higher transition temperature. They believe this unusual two-step phenomena comes from competition of electronic behavior in different kinds of copper-oxygen layers in the crystal. 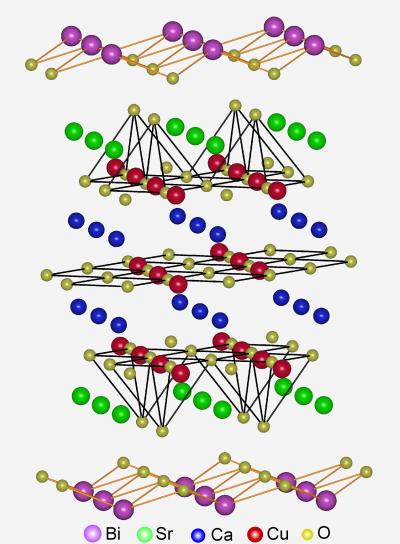 “Bi2223 is like a layered cake,” explained lead author Xiao-Jia Chen at Carnegie. “On the top and bottom there are insulating bismuth-oxide layers. On the inside of those, come layers of strontium oxide. Next, are layers of copper oxide, then calcium, and finally the middle is another copper-oxide layer. Interestingly, the outermost and inner layers of copper oxide have different physical properties resulting in an imbalance of electric charge between the layers.”

One way scientists have found to increase the transition temperature of superconducting materials is to “dope” them by adding charged particles.

Under normal pressure, the optimally doped Bi2223’s transition temperature is -265°F (108K). The scientists subjected doped crystals of the material to a range of pressures up to 359,000 times the atmospheric pressure at sea level (36.4 Giga Pascal), the highest pressure yet for magnetic measurements in cuprate superconductors. The first higher transition temperature happened at 100,666 atmospheres (10.2 GPa).

Other research has shown that some multilayered superconducting materials like this one exhibit different electronic and vibrational behaviors in different layers. The researchers think that 237,000 atmospheres might be a critical point where pressure suppresses one behavior and enhances superconductivity.

The research was supported by the U. S. Department of Energy, Carnegie Canada, and the National Natural Science Foundation of China.