As temperatures rise, some of the organic carbon stored in Arctic permafrost meets an unexpected fate—burial at sea. As many as 2.2 million metric tons of organic carbon per year are swept along by a single river system into Arctic Ocean sediment, according to a new study an international team of researchers published in Nature. This process locks away carbon dioxide (CO2) – a greenhouse gas – and helps stabilize the earth’s CO2 levels over time, and it may help scientists better predict how the natural carbon cycle will interplay with the surge of CO2 emissions due to human activities. 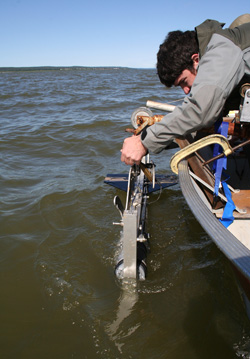 WHOI Associate Scientist Valier Galy lowers a sampling device into the Mackenzie River. Chemical analysis of the collected samples revealed that the river’s transport of organic carbon creates a carbon sink, burying CO2 in Arctic Ocean sediments without releasing it into the atmosphere. (Photo by Robert Hilton, Durham University)

“The erosion of permafrost carbon is very significant,” says Woods Hole Oceanographic Institution (WHOI) Associate Scientist Valier Galy, a co-author of the study. “Over thousands of years, this process is locking CO2 away from the atmosphere in a way that amounts to fairly large carbon stocks. If we can understand how this process works, we can predict how it will respond as the climate changes.”

Permafrost—frozen ground found in the Arctic and in some alpine regions—is known to hold billions of tons of organic material. Amid concerns about rising Arctic temperatures and their impact on permafrost, many researchers have directed their efforts to studying the permafrost carbon cycle—the processes through which carbon circulates between the atmosphere, the soil and plants (the biosphere), and the sea. Yet how this cycle works and how it responds to the warming, changing climate remains poorly understood.

Galy and his colleagues from Durham University, the Institut de Physique du Globe de Paris, the NERC Radiocarbon Facility, Stockholm University, and the Universite Paris-Sud set out to characterize the carbon cycle in one particular piece of the Arctic landscape—northern Canada’s Mackenzie River, the largest river flowing into the Arctic Ocean from North America and that ocean’s greatest source of sediment. The researchers hypothesized that the Mackenzie’s muddy water might erode soils along its path, some from places where permafrost is melting, and wash that biosphere-derived material and the organic carbon within it into the ocean, preventing the degradation of organic carbon and associated release of CO2 into the atmosphere.

The researchers collected samples at various depths and locations along the river system, lowering a specially-designed device to take samples of the water and suspended sediments carried by the river. To take into consideration the river’s seasonal variation—its flow increases sharply during the spring, when warm temperatures melt the snowpack and raise water levels, and drops during the frozen winter months—they sampled it during different seasons across three years starting in 2009. 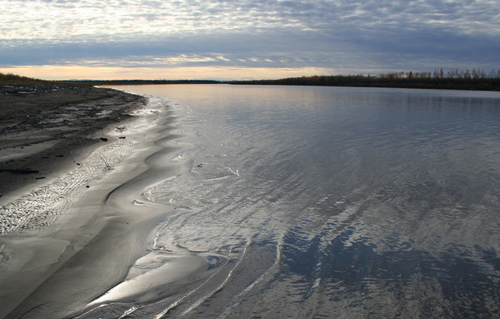 Northern Canada’s Mackenzie River is the largest river flowing into the Arctic Ocean from North America—and the dominant source of biosphere-derived organic carbon in Arctic Ocean sediments, according to a new study. (Photo by Robert Hilton, Durham University)

Then the researchers sifted through the samples to isolate the carbon they contained. They used the presence of one specific isotope of carbon that decays over time, carbon-14, to determine how old the carbon was. This was important because it revealed the carbon’s origin– rock or biosphere.

“The carbon that comes from the rocks has been there for hundreds of thousands, sometimes millions of years,” Galy says. “The other carbon can come from a tree that fell into the river two days before we sampled or from the permafrost and be thousands years old.” 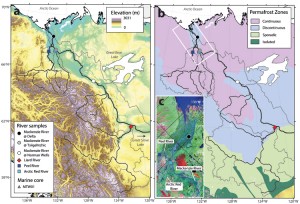 The researchers collected samples (denoted by circles) at three locations along the Mackenzie River—the river delta (black), Tsiigehtchic (grey), and Norman Wells (white)—along with its major tributaries, the Liard River (red diamond), the Arctic Red River (light blue square), and the Peel River (dark blue square). They compared the chemical composition of these samples with those obtained from the sediment core MTW01 in the Arctic Ocean’s Mackenzie trough (triangle). a, The river’s major channels (black lines) are overlain on a digital elevation model that shows sediment catchment areas and flow accumulation and flow direction with dotted lines. b, A map shows the status of permafrost in the upstream areas of the Mackenzie River basin. c, White rectangles show the sample locations near the Mackenzie River delta overlain on satellite imagery of the basin. Illustration courtesy of Hilton, et al (Click image to enlarge)

“If you bury the biosphere-based carbon, you have an actual carbon sink—you’re taking carbon that could be out in the atmosphere and locking it away,” Galy says.

The researchers compared what they found along the river to a sediment core obtained from the Arctic Ocean seabed at the Mackenzie delta, tracing the rock and biosphere carbon to the sediment deposits there. They found that a significant amount of the biosphere carbon—more than that carried by all the major Eurasian Arctic rivers combined—is swept into storage offshore. Using carbon-14 they further determined that this biosphere-derived carbon is up to 9000 years old, a clearly indication of its permafrost origin.

“That carbon is not returning to the atmosphere for a long time,” says Robert Hilton, associate professor at Durham University who worked on the study. “Over geological timescales, warming conditions lead to the sequestration of that carbon at sea.”

This sequestration likely kept naturally-occurring CO2 levels in check. But the researchers emphasize that this natural process is 10 to 20 times too slow to keep pace with CO2 emissions from human activities, such as the burning of fossil fuels.

“River transfer is not going to solve the problem—it’s not going to make the CO2 we inject into the atmosphere go away,” Galy says. But the findings do reveal a more complex picture of the relationships between warming temperatures, thawing permafrost and carbon emission—a picture that Galy and his international colleagues hope to further investigate with future studies.

The research was supported by the WHOI Arctic Research Initiative, the Natural Environment Research Council UK, an Early Career Research Grant by the British Society for Geomorphology, a Royal Society University Fellowship, and a grant from the National Science Foundation (OCE-0928582).