Risk of Amazon Rainforest Dieback is Higher than IPCC Projects

AUSTIN, Texas  —  A new study suggests the southern portion of the Amazon rainforest is at a much higher risk of dieback due to stronger seasonal drying than projections made by the climate models used in the latest report by the Intergovernmental Panel on Climate Change (IPCC). If severe enough, the loss of rainforest could cause the release of large volumes of the greenhouse gas carbon dioxide into the atmosphere. It could also disrupt plant and animal communities in one of the regions of highest biodiversity in the world.

Using ground-based rainfall measurements from the past three decades, a research team led by Rong Fu, professor at The University of Texas at Austin’s Jackson School of Geosciences, found that since 1979, the dry season in southern Amazonia has lasted about a week longer per decade. At the same time, the annual fire season has become longer. The researchers say the most likely explanation for the lengthening dry season is global warming.

“The dry season over the southern Amazon is already marginal for maintaining rainforest,” says Fu. “At some point, if it becomes too long, the rainforest will reach a tipping point.” 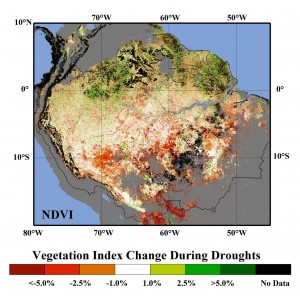 The new results are in stark contrast to forecasts made by climate models used by the IPCC. Even under future scenarios in which atmospheric greenhouse gases rise dramatically, the models project the dry season in the southern Amazon to be only a few to 10 days longer by the end of the century, and therefore the risk of climate change-induced rainforest dieback should be relatively low.

The report appears this week in the journal Proceedings of the National Academy of Sciences.

The southern Amazon dry season length (DSL, red line) has lengthened by about a week per decade since 1979, mostly due to a delayed dry season end (DSE, blue line). The time unit is pentad (5 days). On the left axis, the 55th pentad corresponds to September 2–7 and the 70th pentad corresponds to December 10–15. The linear trend is determined by a least-square fitting. Image credit: U. of Texas at Austin (Click image to enlarge)

The researchers say the most likely explanation for the lengthening dry season in the southern Amazon in recent decades is human-caused greenhouse warming, which inhibits rainfall in two ways. First, it makes it harder for warm, dry air near the surface to rise and freely mix with cool, moist air above. And second, it blocks cold front incursions from outside the tropics that could trigger rainfall. The climate models used by the IPCC do a poor job representing these processes, which might explain why they project only a slightly longer Amazonian dry season, says Fu.

The Amazon rainforest normally removes the greenhouse gas carbon dioxide from the atmosphere, but during a severe drought in 2005, it released 1 petagram of carbon (about one-tenth of annual human emissions) to the atmosphere. Fu and her colleagues estimate that if dry seasons continue to lengthen at just half the rate of recent decades, the Amazon drought of 2005 could become the norm rather than the exception by the end of this century.

“Because of the potential impact on the global carbon cycle, we need to better understand the changes of the dry season over southern Amazonia,” says Fu.

Some scientists have speculated that the combination of longer dry seasons, higher surface temperatures and more fragmented forests resulting from ongoing human-caused deforestation could eventually convert much of southern Amazonia from rainforest to savanna.

Because the northwestern Amazon has much higher rainfall and a shorter dry season than the southern Amazon, Fu and others think it is much less vulnerable to climate change.

This work is supported by the National Science Foundation (AGS 0937400) and the NOAA Climate Program Office Modeling, Analysis, Prediction and Projection Program (NA10OAAR4310157).