COLLEGE PARK, Md. – Increases in air pollution and other particulate matter in the atmosphere can strongly affect cloud development in ways that reduce precipitation in dry regions or seasons, while increasing rain, snowfall and the intensity of severe storms in wet regions or seasons, says a new study by a University of Maryland-led team of researchers.

The research provides the first clear evidence of how aerosols — soot, dust and other small particles in the atmosphere — can affect weather and climate; and the findings have important implications for the availability, management and use of water resources in regions across the United States and around the world, say the researchers and other scientists.

“Using a 10-year dataset of extensive atmosphere measurements from the U.S. Southern Great Plains research facility in Oklahoma [run by the Department of Energy’s Atmospheric Radiation Measurement program] — we have uncovered, for the first time, the long-term, net impact of aerosols on cloud height and thickness, and the resultant changes in precipitation frequency and intensity,” says Zhanqing Li, a professor of atmospheric and oceanic science at Maryland and lead author of the study.

The study found that under very dirty conditions, the mean cloud height of deep convective clouds is more than twice the mean height under crystal clean air conditions. “The probability of heavy rain is virtually doubled from clean to dirty conditions, while the chance of light rain is reduced by 50 percent,” says Maryland’s Li, who is also affiliated with Beijing Normal University. 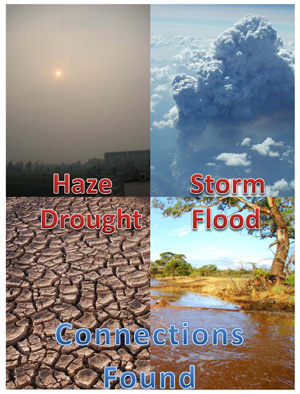 The scientists obtained additional support for these findings with matching results obtained using a cloud-resolving computer model. The study by Li and co-authors Feng Niu and Yanni Ding, also of the University of Maryland; Jiwen Fan of Pacific Northwest National Laboratory; Yangang Liu of Brookhaven National Laboratory, Upton, NY; and Daniel Rosenfeld of the Hebrew University of Jerusalem, is published in the November 13 issue of Nature Geoscience.

“These new findings of long-term impacts, which we made using regional ground measurements, also are consistent with the findings we obtained from an analysis of NASA’s global satellite products in a separate study. Together, they attest to the needs of tackling both climate and environmental changes that matter so much to our daily life,” says Li.

“Our findings have significant policy implications for sustainable development and water resources, especially for those developing regions susceptible to extreme events such as drought and flood. Increases in manufacturing, building of power plants and other industrial developments, together with urbanization, are often accompanied with increases in pollution whose adverse impacts on weather and climate, as revealed in this study, can undercut economic gains,” he stresses.

Tony Busalacchi, chair of the Joint Scientific Committee, World Climate Research Program notes the significance of the new findings. “Understanding interactions across clouds, aerosols, and precipitation is one of the grand challenges for climate research in the decade ahead, as identified in a recent major world climate conference. Findings of this study represent a significant advance in our understanding of such processes with significant implications for both climate science and sustainable development,” says Busalacchi, who also is professor and director of the University of Maryland Earth System Science Interdisciplinary Center.

“We have known for a long time that aerosols impact both the heating and phase changes [condensing, freezing] of clouds and can either inhibit or intensify clouds and precipitation,” says Russell Dickerson, a professor of atmospheric and oceanic science at Maryland. “What we have not been able to determine, until now, is the net effect. This study by Li and his colleagues shows that fine particulate matter, mostly from air pollution, impedes gentle rains while exacerbating severe storms. It adds urgency to the need to control sulfur, nitrogen, and hydrocarbon emissions.”

According to climate scientist Steve Ghan of the Pacific Northwest National Laboratory, “This work confirms what previous cloud modeling studies had suggested, that although clouds are influenced by many factors, increasing aerosols enhance the variability of precipitation, suppressing it when precipitation is light and intensifying it when it is strong. This complex influence is completely missing from climate models, casting doubt on their ability to simulate the response of precipitation to changes in aerosol pollution.”

Aerosols are tiny solid particles or liquid particles suspended in air. They include soot, dust and sulfate particles, and are what we commonly think of when we talk about air pollution. Aerosols come, for example, from the combustion of fossil fuels, industrial and agricultural processes, and the accidental or deliberate burning of fields and forests. They can be hazardous to both human health and the environment. 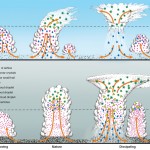 Aerosol particles also affect the Earth’s surface temperature by either reflecting light back into space, thus reducing solar radiation at Earth’s surface, or absorbing solar radiation, thus heating the atmosphere. This variable cooling and heating is, in part, how aerosols modify atmospheric stability that dictates atmospheric vertical motion and cloud formation. Aerosols also affect cloud microphysics because the serve as nuclei around which water droplets or ice particles form. Both processes can affect cloud properties and rainfall. Different processes may work in harmony or offset each other, leading to a complex yet inconclusive interpretation of their long-term net effect.

“When the air rises the water vapor condenses on aerosol particles to form cloud drops,” says Daniel Rosenfeld, a co-author of the Nature Geoscience article. “In cleaner air the cloud drops are larger due to fewer drops and have better chances of colliding to form large rain drops. In polluted air more and smaller drops are formed. They float in the air and are slow to coalesce into rain drops. With small amount of moisture most cloud drops never become large enough for efficient precipitation, and hence rainfall is reduced. The rain that is withheld in moist polluted deep clouds freezes at higher altitudes to form ice crystals or even hail. The energy released by freezing, fuels the clouds to grow taller and create larger ice particles that produce more intense precipitation. This explains why air pollution can exacerbate both drought and flood. This may partially explain his finding of another study that there are more severe convective storms during summer in the eastern United State, which is generally more polluted than the rest of the country.”

Greenhouse gases and aerosol particles are two major agents dictating climate change. The mechanisms of climate warming impacts of increased greenhouse gases are clear (they prevent solar energy that has been absorbed by the earth’s surface from being radiated as heat back into space), but the climate effects of increased aerosols are much less certain due to many competing effects outlined above. Until now, studies of the long-term effects of aerosols on climate change have been largely lacking and inconclusive because their mechanisms are much more sophisticated, variable, and tangled with meteorology.

“This study demonstrates the importance and value of keeping a long record of continuous and comprehensive measurements such as the highly instrumented (ARM) sites run by the Department of Energy’s Office of Science, including the Southern Great Plains site, to identify and quantify important roles of aerosols in climate processes. While the mechanisms for some of these effects remain uncertain, the well-defined relationships discovered here clearly demonstrate the significance of the effects. Developing this understanding to represent the controlling processes in models remains a future challenge, but this study clearly points in important directions,” says Stephen E. Schwartz, a scientist at Brookhaven National Laboratory.

Support for this research was provided by the Department of Energy, NASA, the National Science Foundation and the Chinese Ministry of Science and Technology.

The work adds to and builds on a great deal of other research about air pollution and climate change by University of Maryland researchers in the university’s Earth System Sciences Interdisciplinary Center and its Department of Atmospheric and Oceanic Science, and at the DOE national labs.

UMD A Leader in Climate Science and Information

Over the past two decades, the University of Maryland has developed major partnerships with state and federal agencies and fostered research in areas critical to understanding and responding to climate change, including atmospheric and earth science, satellite remote sensing, climate modeling, and energy and insurance research and policy. The UMD Earth System Sciences Interdisciplinary Center’s existing cooperative agreement with the NASA/Goddard Space Flight Center and the Cooperative Institute for Climate and Satellites (joint with the National Oceanic and Atmospheric Administration, (NOAA), are two of these partnerships. A third is the Joint Global Change Research Institute (with the Department of Energy). These units are working to help understand climate change, its impacts, and the scientific, technological, economic and public policy challenges it poses.

University efforts to provide the user-driven information and the regional and shorter-term climate forecasts needed by government, business and private citizens are led by UMD’s CIRUN (Climate Information: Responding to User Needs) Office, which is creating partnerships among climate scientists; experts from other disciplines such as agriculture, engineering, public health, and risk management; companies which deliver specialized information; and decision makers in the private and public sectors.