In Defending the Filibuster: The Soul of the Senate, political scientists and former Senate staffers Richard Arenberg and Robert Dove argue that the solution to recent criticism of the filibuster is not to do away with it. Arenberg speaks with Courtney Coelho about the history of Senate debate, how its use has been distorted in recent years and why reforms, not abolishment, are key to preserving Senate minority rights.

A new book co-authored by Brown University political scientist Richard Arenberg argues that the filibuster, used to extend debate on pending legislation in the Senate, is a necessary entity, giving a voice to the minority and preserving the Constitution’s principles of checks and balances. The filibuster has come under fire in recent years, with critics saying it serves no purpose other than to perpetuate partisan polarization and stall the decision-making process.

Arenberg, adjunct lecturer in public policy at the Taubman Center for Public Policy, explains the cause of the criticism, whether the future of the filibuster is in jeopardy and why everyone, the majority and minority alike, should be in support of this the 200-year-old parliamentrian procedure.

The impetus for your book was to defend the filibuster against recent criticism of its function in the Senate. What is the cause of that criticism?

Certainly the perceived ineffectiveness of the Senate in recent years, some of it deserved, some of it undeserved. I think there was a good deal of frustration with the difficulty early on in getting the Obama Health Reform bill passed. I think Democrats felt as though they had a new president elected with a big mandate. They had large majorities at that point in the Senate and the House and the sort of thing you would hear is “Elections have consequences” and “The minority ought to get out of the way and let the majority fulfill its mandate.”

Our perspective is that the roots of the controversy, to the extent that it exists, is the extremely highly polarized partisan nature of the current political culture, which has made legislating clearly more difficult. I think it’s fair to say that over the course of history, majorities hate the filibuster and minorities love it. And so, for example, if Romney is elected in November and brings in a Senate majority, you’ll see the shoe on the other foot. 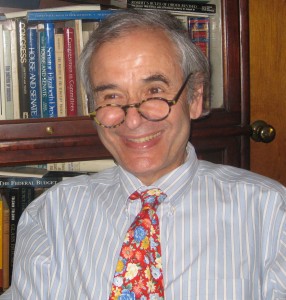 So one of the primary complaints is that it’s being used as a tool for obstructionism. Was this its original purpose?

Between 1806 and 1917, when the cloture rule – also known as Rule 22, which set up the procedure for cutting off debate during a filibuster – was passed there was no way to end debate in the Senate. Even after 1917, when the cloture rule was adopted, filibusters were relatively rare and they were mostly reserved by senators for matters of great importance, like the famous civil rights filibusters, or matters of state interest when senators had a particular issue to defend.

Increasingly, since about 1980, as the Senate has gotten more and more polarized, the growth in the use of the filibuster has been exponential so that it’s become almost a rule that any proposal put forth by the majority will be filibustered by the minority. It’s particularly acute when the Senate is controlled by the party out of power in the White House; it’s the last bastion of the minority to fight presidential control. We have argued that this exponential growth in recent years rises to the level of abuse, but the solution to this abuse is not to do away with the filibuster.

Why isn’t abolishing the filibuster the solution?

This particular set of rules has been a force in our system for 200 years now, pushing the Senate in the direction of consensus-building. Since it takes a super majority to end debate on controversial matters and get significant things done, this requires in almost every circumstance that the majority have at least a part of the minority working with them in order to move things forward. And to people who think it would fix these polarization problems to do away with the filibuster and just go by majority vote, I say you better love how the House of Representatives operates. It’s a majoritarian body and the leaders of the two parties don’t even talk to each other, they can’t work together, so the majority does pretty much what it wants.

The Senate has had a very different history. The Senate is all about protecting the rights of the minority, which is a feature of democracy. And the stick behind that is the filibuster, because the majority knows they just can’t stuff what they want down the throat of the minority. Democracy is more than two wolves and a sheep voting on what to have for dinner, so it’s more than a simple majority question.

Is the filibuster in danger of being abolished?

Not unless the majority party gets so frustrated that they’re willing to do it. It’s fear of that in a large part that was one of our motivations for writing the book. At the heart of the debate is an argument that will most likely come up in January, whatever party’s in control, over what’s called the “constitutional option.” This is the notion that at the beginning of each new Congress the rules of the Senate, including the right to filibuster, can be changed by majority vote. This argument has been around for 200 years and the position that the Senate has always taken is that unlike the House, it’s a continuing body because only one-third of the Senate is up for re-election at any one time. The rules that exist are precisely the rules that were adopted by the first Congress in 1787. They’ve amended them, but it’s essentially the same rule book. So those that argue the constitutional option, this flies in the face of that.

So then the question comes up: Can they get away with it, can they do it? They could if the presiding officer, most likely the vice president, is willing to do two things: ignore the precedence and the rules of the Senate and ignore the advice of the parliamentarian. So it could be done. But in the book, we question the legitimacy of doing it in this fashion.

So if the filibuster remains, could reforms make it more efficient in the eyes of its detractors?

Many of the most frustrating filibusters that take place in the Senate occur when the minority filibusters what’s called the “motion to proceed.” In other words, before a bill can be debated and amended it has to be taken up by the Senate. It’s a debatable motion in the Senate, making it subject to filibuster. This is very frustrating to the majority because it’s not even the bill itself that’s being filibustered yet. In fact, there are six different times that you can filibuster the same piece of legislation in its passage through the Senate.

We also argue that when the Senate come back from recess in September there is a window of opportunity before the election to maybe affect some sort of bipartisan reforms. We’re now in a period when we have a closely divided Senate and an election coming up in November when nobody is really certain who’s going to be in the majority come January. It gives the Senate a chance to think about what’s best for the group. This trigger mechanism could put a lot of potential reforms on the table that would help to make the Senate a more efficient body. But doing away with the filibuster makes efficiency king and that’s not what the Senate was designed to be. It’s not what the founders had in mind and it’s not what the early Senators who wrote the rules and defended it over the past 200 plus years had in mind.