Studies of frogs may lead to better hearing aids

When Mark Bee talks to his 106-year-old grandmother alone, her two enormous hearing aids enable her to understand him well.

“But at a table at Thanksgiving, with everybody talking, the devices don’t do well,” says Bee, an associate professor of ecology, evolution and behavior at the University of Minnesota.

Her difficulty in a noisy situation is called the cocktail party problem, after the background babble that stymies many hearing-impaired people trying to pick out individual voices at a party. But in ponds all over the world, frogs handle a similar problem, and Bee hopes to learn enough about how they do it to put the principles to work helping people like his grandmother. 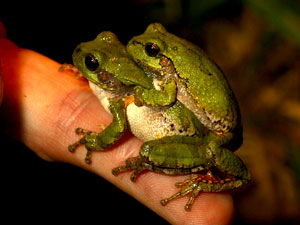 Bee and his students spend the first half of summers in waders, collecting frogs from area ponds during late evening hours, when the males’ calls create a cacophony. They capture pairs locked in the mating embrace (amplexus), then bring the females into the lab for a day of testing before returning them to their home ponds the next night.

In his main project, Bee studies the female Cope’s gray treefrog. This species shares ponds with eastern gray treefrogs and must distinguish the calls.

“Frogs have evolved a social system where males congregate and call together,” says Bee. “A pond the size of [my] lab would have hundreds. At one meter’s distance, each frog can produce enough decibels to fall between the most annoying alarm clock and a jackhammer.”

In a typical experiment, he plays calls from males of various species, with the peeping of the same-species male coming from just one direction. The females’ job is to choose the correct call. With normal calls, the Cope’s frogs unerringly move toward “Mr. Right”—and hop to it. 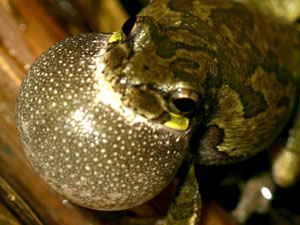 Easy enough, but for hearing-impaired people, it’s hard to separate different voices when background noise levels are high. And perhaps for frogs, too. Using digital technology, Bee mimics this situation by manipulating the acoustic differences between the two species’ calls and then playing the calls to females in the lab.

He has found that for frogs as for humans, it’s easier to discriminate different sounds when they come from different directions than the background noise. “That’s one of bigger things that contribute to our ability to discriminate voices at a cocktail party,” he says.

Researchers in his lab are also using a laser to measure vibrations in the frog eardrum.

“We’re interested in the velocity of eardrum movement in response to different sounds,” says Bee. “A graduate student is measuring the auditory brainstem response, which is the same test a hospital uses to measure a newborn’s hearing. We want to know how different acoustic inputs through the eardrum are converted to different neural responses in the brain.”

Bee’s studies contribute to a body of work on how evolution has solved similar problems, such as the cocktail party problem, in various animal groups. The lineages leading to modern amphibians and mammals, he says, diverged about 350 million years ago, long before dinosaurs came along. Since then, the tympanic ear has evolved several times: in amphibians, birds and reptiles, and mammals.

“Frogs and human ears have similarities and differences, and we ask which ones help them solve the cocktail party problem,” Bee says. “We’re finding frogs exploit similar cues, even with different auditory systems and less complex brains.”

Here’s one big difference between human and frog auditory systems. In humans and other mammals, the middle ears are isolated from each other. But frogs have wide Eustachian tubes that are permanently open and connect the middle ears on opposite sides of the head through a common air passage through the mouth. So when sound pushes one eardrum in, the other can get pushed out. Thus, while mammalian ears sense pressure, frog ears sense pressure differences.

Hold on. Aren’t scientists supposed to study critters like mice, which are similar to humans, if they want to help people?

Bee takes the tack that the key to solving the cocktail party problem may lie in constructing hearing aids that don’t necessarily process sound the way the human ear does—say by being connected to each other, like frog ears. Or, as he says: