Phosphorus is one of the most common substances on Earth. An essential nutrient for every living organism—humans require approximately 700 milligrams per day—we are rarely concerned about consuming enough of it because it is present in most of the foods we eat. Despite its ubiquity and living organisms’ utter dependence on it, we know surprisingly little about how it moves, or cycles, through the ocean environment.

Scientists studying the phosphorus cycle in the ocean knew that it was absorbed by plants and animals, and released back to seawater in the form of phosphate as they decay and die.  Over the last 10 years, a growing body of research has hinted that phosphorus was being transformed by microbes in the ocean in ways that remained a mystery. 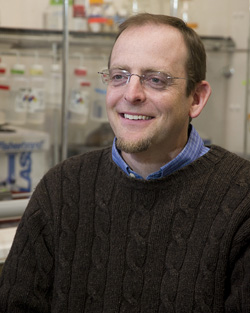 “This is an exciting new discovery that closes a fundamental knowledge gap in our understanding of the marine phosphorus cycle,” says the study’s lead author Ben Van Mooy, a biochemist at WHOI. (Image credit: Tom Kleindinst, Woods Hole Oceanographic Institution)

A new study by a research team from the Woods Hole Oceanographic Institution (WHOI) and Columbia University reveals for the first time a marine phosphorus cycle that is much more complex than previously thought. The work also highlights the important but previously hidden role that some microbial communities play in using and breaking down forms of this essential element.

“This is an exciting new discovery that closes a fundamental knowledge gap in our understanding of the marine phosphorus cycle,” says the study’s lead author Ben Van Mooy, a biochemist at WHOI.

Much like phosphorus-based fertilizers boost the growth of plants on land, phosphorus in the ocean promotes the production of microbes and tiny marine plants called phytoplankton, which compose the base of the marine food chain. It’s been unclear exactly how phytoplankton are using the most abundant forms of phosphorus found in the ocean—phosphates and a strange form of phosphorus called phosphonates.

“Phosphonates have always been a huge mystery,” Van Mooy says. “No one’s been able to figure out exactly what they are, and more importantly, if they’re made and consumed quickly by microbes, or if they’re just lying around in the ocean.” 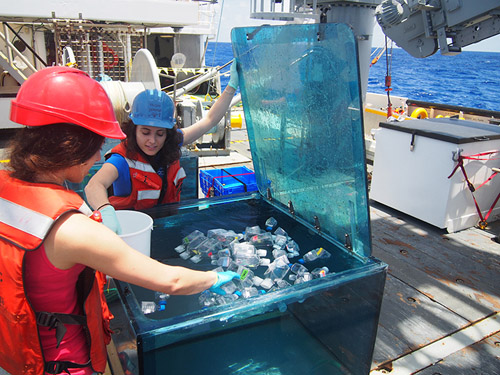 In order to determine the quantitative role of Trichodesmium in the phosphorus cycle, cells were incubated in bottles containing trace quantities of radioactive phosphate. University of Southampton graduate student Despo Polyviou (left) and Columbia University postdoctoral investigator Monica Rouco, place the bottles in a large container that is designed to mimic the light and temperature of the surface ocean. The container also ensure that the bottles, and the radioactivity they contain, never fall into the ocean. (Image credit: Andreas Krupke, Woods Hole Oceanographic Institution)

To find out more about these mysterious phosphonates and how microbes metabolize them, the researchers took samples of microbes like phytoplankton from seawater obtained at a series of stations during a cruise from Bermuda to Barbados in the summer of 2014.  They added phosphate to the samples so that they could see the microbes in action.

The research team utilized ion chromatography on board the ship for water chemistry analyses, which allowed them to observe how quickly the microbes reacted to the added phosphate in the seawater.

“The ion chromatograph (IC) separates out the different families of molecules,” explains Van Mooy. “We added radioactive phosphate and then isolated the phosphonate to see if they became radioactive too.  It’s the radioactive technique that let us see how fast they transform phosphate to phosphonate.” 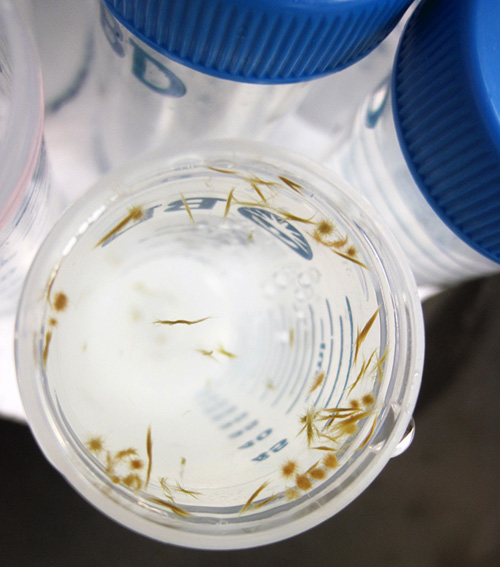 Trichodesmium forms colonies of a wide variety of shapes are clearly visible to the naked eye (the diameter of the test tube is about the same as a U.S. quarter coin). These remarkable organisms drive a previously unknown redox cycle of phosphorus in the upper ocean. (Image credit: Carly Buchwald, Woods Hole Oceanographic Institution)

“Although evidence of the cycling of phosphonates has been mounting for nearly a decade, these results show for the first time that microbes are producing phosphonates in the ocean, and that it is happening very quickly,” says coauthor Sonya Dyhrman, an associate professor in the Department of Earth and Environmental Sciences at Columbia University. “An exciting aspect of this study was the application of the IC method at sea.  In near real time, we could tell that the phosphate we added was being transformed to phosphonate, and everyone on the ship got to share in this moment and the process of discovery.”

A better understanding of phosphorus cycling in the oceans is important since it impacts the marine food chain and, therefore, the ability of the oceans to absorb atmospheric carbon dioxide. The researchers say that solving the mystery about phosphonates also reinforces the need to identify the full suite of phosphorus biochemicals being produced and metabolized by marine microbes and what physiological roles they serve for these cells.

“Such work will help us further resolve the complexities of how this critical element is cycled in the ocean,” Dyhrman adds.

“A reason to be excited about the findings of this elegant study is in the paper’s last sentence: ‘the environmental, ecological, and evolutionary controls . . . remain completely unknown.’ There’s still a lot we don’t know about the sea,” says Don Rice, program director in the National Science Foundation’s Division of Ocean Sciences, which funded the research.

The work was also supported by grants from the Simons Foundation.