Research from the University of Exeter has revealed that the rock goby (Gobius paganellus), an unassuming little fish commonly found in rock pools around Britain, southern Europe, and North Africa, is a master of camouflage and can rapidly change colour to conceal itself against its background.

Whether hiding from predators or from families hunting in rock pools, the rock goby can change both its colour and brightness to match its background in just one minute.

Dr Martin Stevens from the Centre for Ecology and Conservation at the University of Exeter’s Penryn Campus in Cornwall said: “Anyone who’s been rock pooling will probably have encountered rock gobies, and may even have thought they could see them change colour in buckets. Our research shows that this is the case and that rock gobies can rapidly tune their appearance to match their background.” 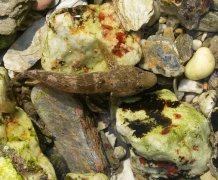 The rock goby can change both its colour and brightness in just one minute. Image credit: Alice Lown

The researchers found that when gobies were photographed on a bright white or dark background, they could change their brightness accordingly. When photographed on coloured backgrounds they altered their colour, becoming either more red or blue.

Undertaking this rapid visual change should be a major advantage for the fish when trying to avoid predators. Gobies find themselves under intense predation pressure at low tide from birds and at high tide from larger fish. To remain concealed they must rapidly respond as they are pushed over many different backgrounds by tides and waves.

The researchers collected the gobies from Gyllyngvase beach in Falmouth, Cornwall then photographed them against different backgrounds over time to quantify the speed and extent of the colour change. The results show that the fish were capable of rapid visual change for concealment.

The colour change is driven by special cells in the fishes’ bodies called ‘chromatophores’. These are found in many animals and work to condense or spread pigments of different colour over the body, changing the appearance of the fish. This process is guided by the visual system of the goby when it moves onto a new background.

Studies of colour change for camouflage have previously been undertaken in animals including chameleons, cuttlefish, flatfish, and crabs, but rarely have studies directly quantified the changes in colour and brightness that occur, how fast this happens, and how they affect camouflage matching.

The research was supported by the Biotechnology and Biological Sciences Research Council.