New England is expected to experience a “moderate” red tide this spring and summer, report NOAA-funded scientists studying the toxic algae that cause blooms in the Gulf of Maine. The “red tide” is caused by an alga Alexandrium fundyense, which produces a toxin that can cause paralytic shellfish poisoning (PSP).  Red tide typically occurs annually along some portions of the Gulf of Maine coast.  This year’s outlook is similar to the 2012 red tide which was also classified as “moderate.”

As with the past five forecasts for this region, the 2013 outlook is based on the quantities of the A. fundyense in its cyst (dormant) state detected in Gulf of Maine sediments last fall. These data are combined with a computer model to produce a range of bloom scenarios based on previous years’ conditions. This year, the team also used a forecast of toxicity impact developed from 34 years of historical data as part of the 2013 outlook.  The 2013 bloom is expected to fall somewhere in the middle in terms of toxicity impact, justifying a “moderate” forecast done by the established method. 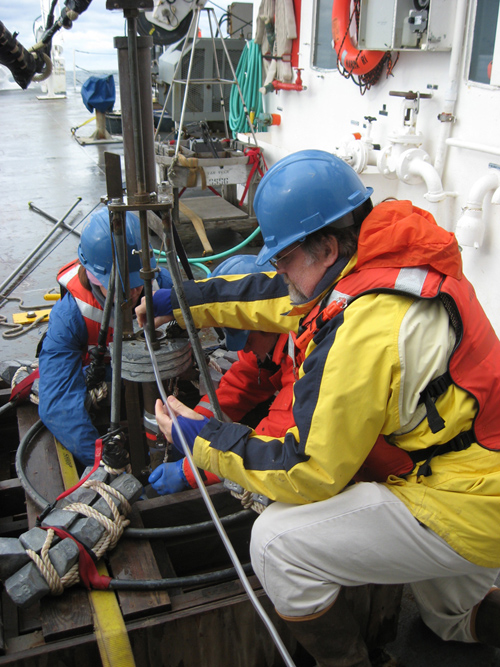 WHOI researcher Bruce Keafer, right, and colleagues prepare a corer to collect sediment samples from the seafloor. They are part of a survey team assembling a regional distribution map of Alexandrium cysts — the “seeds” or dormant cells of the algae responsible for producing the PSP toxin. The team will analyze the samples to determine the abundance of Alexandrium cysts and, with the help of computer models that simulate different scenarios of weather and oceanographic conditions, develop a forecast of the overall regional abundance of toxic cells expected in 2013. (Photo by Amy Lloyd-Rippe)

“This region is very fortunate to have a long time series of cyst abundance data, toxicity records in shellfish, and long-term measurements of ocean conditions from ships and moored instrumented buoys to develop these two complementary approaches to the seasonal forecast,” said Woods Hole Oceanographic Institution (WHOI) biologist Don Anderson.

The forecast team emphasizes the need to consult state and local management agencies for updated harvesting closure information. In order to protect public health, shellfish beds are closed when toxicities rise above a quarantine level, often during the peak harvesting season. Due to effective monitoring by state agencies, there have been no illnesses from legally harvested shellfish in recent years, despite some severe blooms during that time period. There have been, however, several severe poisonings of individuals who ignored closure signs.

“Red tide is a chronic problem throughout the Gulf of Maine, affecting commercial and recreational harvesting interests,” said Chris Nash, shellfish program manager for the New Hampshire Department of Environmental Services.  “State agencies are responsible for monitoring toxicity levels in shellfish harvest areas and implementing harvest closures when needed.  As a state manager, regional-scale, seasonal outlooks help us plan and use limited monitoring resources effectively.  Ultimately our goals are to protect public health and give consumers confidence in the quality of the seafood products they purchase from markets and restaurants, and these forecasts are useful in realizing those goals.” 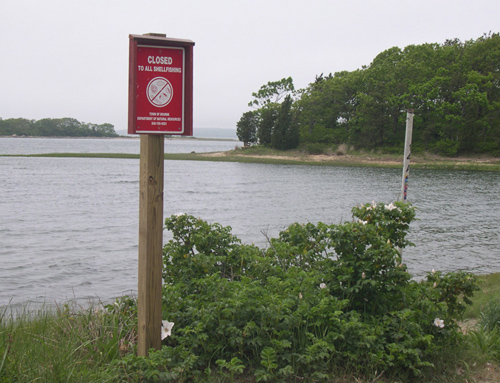 When shellfish accumulate dangerous toxins after filtering algae from water as food, public health is at risk. State and federal agencies monitor these shellfish for biotoxins and close affected areas, posting signs like this. Note that although the water appears clear, there is a danger present. (Photo by Judy Kleindinst, Woods Hole Oceanographic Institution)

Project researchers regularly share their field observations and models with more than 150 coastal resource and fisheries managers in six states as well as federal agencies such as NOAA, the FDA and the EPA. Real-time forecasts are updated on a weekly basis and additional information will be provided on the “Current Status” page of the Northeast PSP website. The National Weather Service is also providing extended hydrological and meteorological outlooks to accompany the bloom forecasts.

“NOAA-funded research has led to the development of seasonal forecasts which aid in monitoring and planning for red tides,” said Quay Dortch, program coodinator for NOAA’s Ecology and Oceanography of Harmful Algal Blooms (ECOHAB) Program. “These forecasts will be an important part of the Operational HAB Forecasting System NOAA is developing to reduce the impacts of harmful algae.” 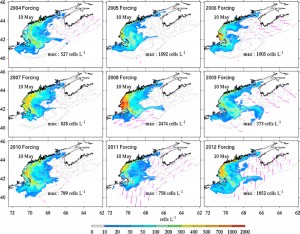 These computer simulation snapshots show projected Alexandrium fundyense cell concentrations produced under nine different weather and oceanographic scenarios representative of 2004 through 2012. All simulations were initiated using the latest cyst map based on data collected in fall 2012. The simulations incorporate sunlight, river runoff, and various wind and current patterns to predict the intensity and location of a bloom. These images do not show the highest anticipated cell concentrations, but rather the concentrations and distributions on the same day in May. This approach provides an ensemble forecast that includes years that had highly variable meteorological conditions. In all scenarios, the Alexandrium cell concentrations are moderate relative to past bloom simulations using different cyst maps to initiate the runs. (Figure by Dennis McGillicuddy, Woods Hole Oceanographic Institution; Ruoying He, North Carolina State University) (Click image to enlarge)

The forecasting project is a collaboration of investigators from NOAA’s National Ocean Service, National Weather Service and National Marine Fisheries Service, WHOI, NCSU, University of Maine, the FDA, Maine Department of Marine Resources, New Hampshire Department of Environmental Services, Massachusetts Division of Marine Fisheries, and the North Atlantic Clam Association. Funding is provided through the NOAA program Prevention, Control and Mitigation of Harmful Algal Blooms (PCMHAB), led by Dennis McGillicuddy (WHOI). Long-term support for Alexandrium studies in the Gulf of Maine is provided by the NOAA NOS NCCOS Center for Sponsored Coastal Ocean Research (CSCOR) and NIEHS and the NSF through the Woods Hole Center for Oceans and Human Health.