Researchers Gear Up Galaxy-seeking Robots for a Test Run

A prototype system, designed as a test for a planned array of 5,000 galaxy-seeking robots, is taking shape at the Department of Energy’s Lawrence Berkeley National Laboratory (Berkeley Lab).

Dubbed ProtoDESI, the scaled-down, 10-robot system will help scientists achieve the pinpoint accuracy needed to home in on millions of galaxies, quasars and stars with the Dark Energy Spectroscopic Instrument (DESI) planned for the Mayall Telescope at Kitt Peak National Observatory near Tucson, Ariz. ProtoDESI will be installed on the Mayall Telescope this August and September.

The full DESI project, which is managed by Berkeley Lab, involves about 200 scientists and about 45 institutions from around the globe. DESI will provide the most detailed 3-D map of the universe and probe the secrets of dark energy, which is accelerating the universe’s expansion. It is also expected to improve our understanding of dark matter, the infant universe, and the structure of our own galaxy.

The thin, cylindrical robots that will be tested in ProtoDESI each carry a fiber-optic cable that will be precisely pointed at selected objects in the night sky in order to capture their light. A predecessor galaxy-measuring project, called BOSS, required the light-gathering cables to be routinely plugged by hand into metal plates with holes drilled to match the position of pre-selected sky objects. DESI will automate and greatly speed up this process.

Each 10-inch-long robot has two small motors in it that allow two independent rotating motions to position a fiber anywhere within a circular area 12 millimeters in diameter. In the completed DESI array, these motions will enable the 5,000 robots to cover every point above their metal, elliptical base, which measures about 2.5 feet across. 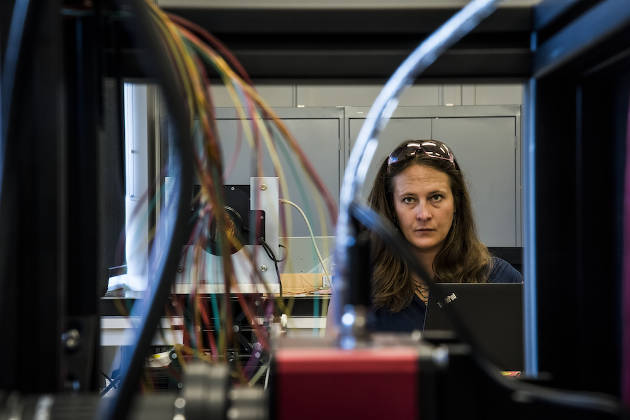 Parker Fagrelius of Berkeley Lab and UC Berkeley inspects ProtoDESI, a prototype system for the Dark Energy Spectroscopic Instrument. ProtoDESI will be tested at the Mayall Telescope in Arizona in August and September. (Image credit: Paul Mueller/Berkeley Lab)

That requires precise, software-controlled choreography so that the tightly packed robots don’t literally bump heads as they spin into new positions several times each hour to collect light from different sets of pre-selected sky objects.

“The main goal of ProtoDESI is to be able to fix fibers on actual objects and hold them there,” said Parker Fagrelius, who is managing the ProtoDESI project at Berkeley Lab. Fagrelius is a UC Berkeley graduate student who is also an affiliate in the Physics Division at Berkeley Lab. ProtoDESI’s robots, assembled at University of Michigan and then shipped to Berkeley Lab, are positioned far enough apart that they won’t accidentally collide during their initial test run.

While DESI’s robots will primarily target galaxies, ProtoDESI will use mostly bright, familiar stars to tune its robotic positioning system and ensure the system is accurately tracking with the motion of objects in the sky. Mounted next to the positioners is a custom digital camera known as the GFA (for guide, focus and alignment) that will remain targeted on a “guide star”—a bright star that will aid the tracking of other objects targeted by the robot-pointed fibers. Several Spanish research institutions in Barcelona and Madrid are responsible for this GFA system.

“We’ll choose the fields we look at quite carefully,” Fagrelius said. The robots will initially fix on isolated sky objects so that they don’t mistakenly point at the wrong objects.

In addition to the 10-robot system, ProtoDESI is equipped with a set of 16 light-emitting rods—shaped similarly to the robots—that project small points of blue light onto a camera to calibrate the positioning system. The completed project will include 120 of these devices, called “illuminated fiducials.”

The fibers carried by the robots each have a core that is 107 microns (millionths of a meter) wide. After repositioning, the fibers will be backlit to project points of light on a camera that can help to fine-tune their individual positions, if needed. Yale University is supplying this fiber-view camera and also the fiducials.

Fagrelius will join a team of researchers at Kitt Peak’s 4-meter Mayall telescope in early August to run through a checklist of ProtoDESI tests. About 28 researchers from nine institutions in the DESI collaboration are working on ProtoDESI, including six Berkeley Lab researchers.

Researchers will test the auto-positioning system by slightly shifting the pointing of the telescope and the fibers—a process known as “dithering”—to see how the components readjust to find the correct targets. A digital camera will measure light streaming in from the fibers to determine if the robots are properly targeting sky objects.

“ProtoDESI will show us how the software and positioners are working together,” Fagrelius said. “All of the things we learn along the way from ProtoDESI will be built back into the plans for DESI’s commissioning.” Some measurements and pre-testing with ProtoDESI will be conducted at Berkeley Lab even before ProtoDESI moves to the Mayall telescope, she added.

The full robotic array planned for DESI will be segmented in 10 pie-wedge-shaped “petals” that each contains 500 robots. The first petal will be fully assembled by October at Berkeley Lab and tested at the lab through December. The multi-petal design will allow engineers to remove and replace individual petals.

The completed project will feature 10 high-resolution spectrographs, that will measure the properties of objects’ light to tell us about how fast faraway galaxies are moving away from us and their distribution, and will help us trace the universe’s expansion history back 12 billion years.

Joe Silber, a Berkeley Lab engineer working on DESI systems that include its robotics, said the fiber-optic cables are among the most sensitive components in DESI. “If there is too tight of a bend or you stress the fiber, it will degrade its performance,” he said, noting that there have already been tests of the repeated bends and twists to the cables caused by the movement of the robots. Over the lifetime of DESI the ends of the fiber-optic cables will be turned almost 200,000 times, he said. Installation of DESI is expected to begin in 2018.

Fagrelius said she looks forward to the ProtoDESI run at Mayall. “September will have a lot more clear nights than August. There should be four weeks of decent time that we can get on sky,” she said, and other tests can be conducted even when viewing is obscured by weather.

DESI is supported by the U.S. Department of Energy Office of Science; additional support for DESI is provided by the U.S. National Science Foundation, Division of Astronomical Sciences under contract to the National Optical Astronomy Observatory; the Science and Technologies Facilities Council of the United Kingdom; the Gordon and Betty Moore Foundation; the Heising-Simons Foundation; the National Council of Science and Technology of Mexico, and DESI member institutions. The DESI scientists are honored to be permitted to conduct astronomical research on Iolkam Du’ag (Kitt Peak), a mountain with particular significance to the Tohono O’odham Nation.

This video shows the rotating motions of a robotic fiber-optic positioner. ProtoDESI will test a group of 10 robotic positioners, and DESI will feature 5,000 robots. (Credit: Berkeley Lab)