Despite growing awareness of the problem of plastic pollution in the world’s oceans, little solid scientific information existed to illustrate the nature and scope of the issue.

This week, a team of researchers from Sea Education Association (SEA), Woods Hole Oceanographic Institution (WHOI), and the University of Hawaii (UH) published a study of plastic marine debris based on data collected over 22 years by undergraduate students in the latest issue of the journal Science.

A previously undefined expanse of the western North Atlantic has been found to contain high concentrations of plastic debris, comparable to those observed in the region of the Pacific commonly referred to as the “Great Pacific Garbage Patch”. 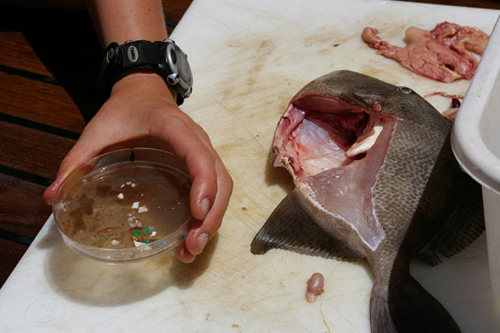 About the image: Forty-seven pieces of plastic debris were found in the stomach of this triggerfish, captured in a surface plankton net tow while traveling with a large plastic bucket in the North Atlantic subtropical gyre. Image credit: David M. Lawrence, SEA

More than 64,000 individual plastic pieces were collected at 6100 locations that were sampled yearly over the course of the study. A surface plankton net was used to collect plastic debris as well as biological organisms at each station.   The highest concentrations of plastic were observed in a region centered at 32°N (roughly the latitude of Atlanta, GA) and extending from 22-38°N latitude.  Numerical model simulations by Nikolai Maximenko (UH) explain why surface currents cause the plastic to accumulate in this region.

Said SEA scientist Kara Lavender Law, the Science paper’s lead author, “Not only does this important data set provide the first rigorous scientific estimate of the extent and amount of floating plastic at an ocean-basin scale, but the data also confirm that basic ocean physics explains why the plastic accumulates in this region so far from shore.” 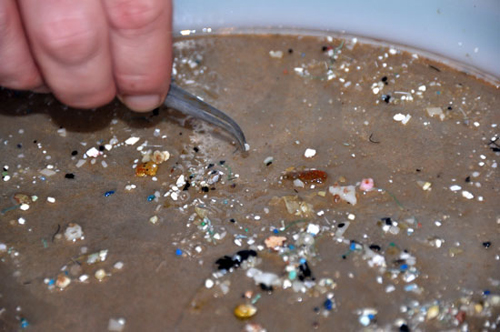 About the image: Plastic pieces, typically millimeters in size, are hand-picked and enumerated from a sample collected with a surface plankton net. Image credit: Marilou Maglione, SEA

One surprising finding is that the concentration of floating plastic debris has not increased during the 22-year period of the study, despite the fact that the plastic disposal has increased substantially. The whereabouts of the “missing plastic” is unknown.

Says SEA Dean Paul Joyce, “The analysis presented in this Science article provides a robust scientific description of the extent of plastic pollution to date, which can be used to make better management and policy decisions, and to inform popular perceptions of this issue.“

A companion study published this week in Marine Pollution Bulletin details the characteristics of the plastic debris collected in these tows.  Most of the plastic is millimeters in size and consists of polyethylene or polypropylene, materials that float in seawater.  There is evidence that biological growth may alter the physical characteristics of the plastic over time, perhaps causing it to sink.“I think some of the big questions are colonization: who actually lives on these pieces of plastic?” said Chris Reddy of WHOI, who was co-author on both papers. “To what extent are ocean currents moving the small life on these plastic particles around the ocean?”

Data continue to be collected onboard SEA’s sailing research vessels in both the Atlantic and Pacific Oceans by undergraduate students in the SEA Semester program.  A dedicated research cruise, Plastics at SEA: North Atlantic Expedition, recently investigated the eastern boundary of the Atlantic accumulation zone.

“The several thousand SEA Semester undergraduate students who helped collect and count plastic debris over the decades have been essential contributors to this work,” said SEA president John Bullard. “They have gained a much fuller understanding of the oceans and the role humans play both in the present and its future.”The work was funded by the National Science Foundation.