In the thick of whale season, researchers from HIMB and the National Oceanic and Atmospheric Administration (NOAA) shed new light on the wintering grounds of the humpback whale. The primary breeding ground for the North Pacific was always thought to be the main Hawaiian Islands. However, a new study has shown that these grounds extend all the way throughout the Hawaiian Archipelago and into the Northwestern Hawaiian Islands (NWHI), also known as Papahānaumokuākea Marine National Monument (PMNM). 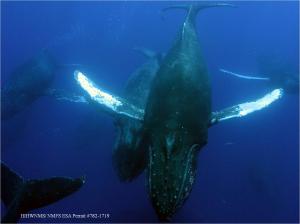 Humpback whales, an endangered species, were once on the brink of extinction due to commercial whaling practices of the last century. Today, thanks to international protection, their numbers have dramatically increased, resulting in a greater presence of these singing mammals during the winter months. Song is produced by male humpback whales during the winter breeding season. All males on a wintering ground sing roughly the same song any given year, but the song changes from year to year. No one is exactly sure why the whales sing but some researchers believe it could be a display to other males.

Between 8,500 and 10,000 whales migrate to Hawai‘i each winter; while the rest of the population can be found in places like Taiwan, the Philippines, the Mariana Islands, Baja California, Mexico, amongst other Pacific locations (Calambokidis et al. 2008). 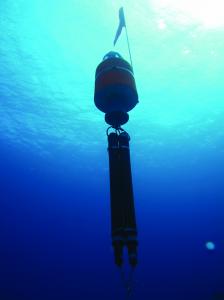 Over the past three decades, population recovery has resulted in a steady increase in the number of whales and a geographic expansion of their distribution in the main Hawaiian Islands. Until recently, however, no empirical evidence existed that this expansion included the Northwestern Hawaiian Islands. This changed recently when scientists from HIMB and NOAA published their findings in the current issue of the journal Marine Ecology Progress Series, detailing the presence of humpback whale song in the Northwestern Hawaiian Archipelago. These researchers deployed instruments known as Ecological Acoustic Recorders (EARs) in both the NWHI and main Hawaiian Islands to record the occurrence of humpback whale song, as an indicator of winter breeding activity. Humpback whale song was found to be prevalent throughout the NWHI and demonstrated trends very similar to those observed in the main Hawaiian Islands.

Dr. Marc Lammers, a researcher at HIMB and the lead scientist of the project explains “these findings are exciting because they force us to re-evaluate what we know about humpback whale migration and the importance of the NWHI to the population.” The results are also of particular relevance in light of recent suggestions that an undocumented wintering area for humpback whales exists somewhere in the central North Pacific. Dr. Lammers and his colleagues believe that the NWHI could be that area.

For more information on this research, contact Lammers at lammers@hawaii.edu.