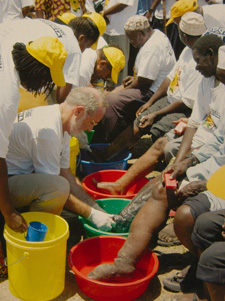 EAST LANSING, Mich. — In a major breakthrough that comes after decades of research and nearly half a billion treatments in humans, scientists have finally unlocked how a key anti-parasitic drug kills the worms brought on by the filarial diseases river blindness and elephantitis.

Understanding how the drug ivermectin works has the potential to lead to new treatments for the diseases, in which the body is infected with parasitic worms, said Charles Mackenzie, a professor of veterinary pathology in the College of Veterinary Medicine and researcher on the project. The diseases afflict about 140 million people worldwide, doing much of their damage in equatorial Africa.

“Ivermectin is one of the most important veterinary and human anti-parasitic agents ever,” Mackenzie said. “Knowing specifically how it interacts with the body’s own immune system and kills parasitic worms opens up whole new treatment avenues.”

The research appears in the current edition of the Proceedings of the National Academy of Sciences.

Elephantiasis (lymphatic filariasis) is caused by tiny worms spread via mosquitoes and results in severe swelling of the legs, arms and torso. River blindness (onchocerciasis) is spread by black flies, and after the worms die in a person’s eye, they can cause blindness and debilitating skin disease.

Ivermectin works by killing the first stage of the worm in the human body, and also appears to paralyze the reproductive tract of the adult female worms, stopping reproduction of new parasites.

What the researchers discovered is that the drug does this by preventing the worm from secreting proteins through a pore in its mid-body; ivermectin binds to receptors at the pore and blocks the secretions. It is the secretions that normally block a person’s ability to attack and kill the worm; after the drug prevents them, the host’s own immune system is able to attack and kill the parasites.

“Understanding how the worms were avoiding the host’s immune responses will greatly enhance our ability to manipulate the immune system to the advantage of the host, and perhaps develop vaccines,” Mackenzie said. “Also, one of the most important challenges in the overall effort against filarial infections relates to the development of resistance and the loss of efficacy of the drugs we use; this new knowledge provides an important key to understanding and perhaps preventing resistance.”

Ivermectin was developed by pharmaceutical firm Merck & Co. in the 1970s. It was donated in 1987 for use to treat river blindness, as existing drugs were in fact inducing blindness. Ivermectin was able to be used safely in mass drug administration programs in many developing countries, shifting the paradigm for how public health programs delivered medicines in rural areas. The drug then was used in other parasitic disease programs, such as the one for elephantiasis, treating more than 100 million people for that disease.

Mackenzie has worked for more than 20 years on tropical filarial diseases, much of that time partnering with Tim Geary at McGill University in Montreal. Geary’s lab was critical in the ivermectin findings, as was McGill graduate student Yovany Moreno. Geary and Mackenzie also recently were awarded $2 million from the Gates Foundation to study another anti-filarial drug, flubendazole.