Researchers from North Carolina State University have developed elastic, self-healing wires in which both the liquid-metal core and the polymer sheath reconnect at the molecular level after being severed.

“Because we’re using liquid metal, these wires have excellent conductive properties,” says Dr. Michael Dickey, an assistant professor of chemical and biomolecular engineering at NC State and co-author of a paper on the work. “And because the wires are also elastic and self-healing, they have a lot of potential for use in technologies that could be exposed to high-stress environments.” 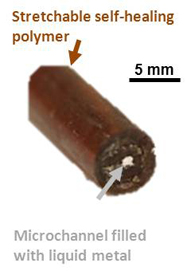 The researchers first created tiny tunnels, called microfluidic channels, in a commercially available self-healing polymer using solid wire. By filling those channels with a liquid-metal alloy of indium and gallium, they were able to create a liquid-metal wire in an elastic sheath. Because the wire is liquid, it can be stretched along with the polymer sheath.

When the wires are sliced or severed, the liquid metal oxidizes – forming a “skin” that prevents it from leaking out of its sheath. When the severed edges of the wire are placed back together, the liquid metal reconnects and the sheath re-forms its molecular bonds.

“We’re also excited about this work because it allows us to create more complex circuits and rewire existing circuits using nothing more than a pair of scissors by cutting and reconfiguring the wires so that they connect in different ways,” Dickey says.

Similarly, the technique developed by Dickey’s team could be used to create complex, three-dimensional structures with connecting microfluidic channels, by cutting the polymer sheath into sections and reconnecting them at different angles with the channels still in alignment.