Researchers from North Carolina State University have confirmed that blood vessel-like structures found in an 80 million-year-old hadrosaur fossil are original to the animal, and not biofilm or other contaminants. Their findings add to the growing body of evidence that structures like blood vessels and cells can persist over millions of years, and the data not only confirm earlier reports of protein sequences in dinosaurs, they represent a significant advance in methodology.

Molecular paleontologist Tim Cleland, currently a postdoctoral researcher at the University of Texas at Austin, began the work while a graduate student at NC State. He demineralized a piece of leg bone from a Brachylophosaurus canadensis, a 30-foot-long hadrosaur that roamed what is now Montana around 80 million years ago. Cleland analyzed the demineralized bone with high resolution mass spectroscopy and found several distinct proteins from the cellular components of the blood vessels. One of these proteins, myosin, is found in the smooth muscles associated with the walls of blood vessels. 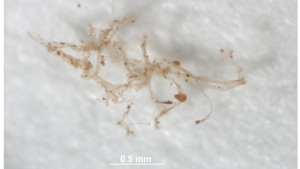 The researchers confirmed their results by performing the same process with bones from modern archosaurs, such as chicken and ostrich, which are living relatives of the dinosaurs. In both the modern and ancient samples, peptide sequences matched those found in blood vessels. Their methodology also allowed the researchers to validate previously reported sequences and recover additional sequences because only the vessels were extracted, which increased the observance of cellular proteins.

“This study is the first direct analysis of blood vessels from an extinct organism, and provides us with an opportunity to understand what kinds of proteins and tissues can persist and how they change during fossilization,” Cleland says. “This will provide new avenues for pursuing questions regarding the evolutionary relationships of extinct organisms, and will identify significant protein modifications and when they might have arisen in these lineages.”

Elena Schroeter, a postdoctoral researcher at NC State, is a co-author who worked on the analysis of the mass spectrometry data. “Paleoproteomics is a challenging pursuit. It requires us to think about how to support our conclusions from different angles,” says Schroeter. “This project is significant because it shows the power of using multiple experimental methods—as well as multiple ways to analyze the results of those methods—to address a scientific question.”

“Part of the value of this research is that it gives us insight into how proteins can modify and change over 80 million years,” says Mary Schweitzer, a molecular paleontologist at NC State and co-author of the paper describing the research. “It tells us not only about how tissues preserve over time, but gives us the possibility of looking at how these animals adapted to their environment while they were alive.”

The findings appear in the Journal of Proteome Research. The research was funded by the NSF (EAR 0541744, DGE-0750733) and the David and Lucile Packard Foundation. The dinosaur sample was provided by the Museum of the Rockies. Neil Kelleher, Paul Thomas, Dorothy Ahlf, and John Tran from Northwestern University, Leonid Zamdborg and Ji Eun Lee at University of Illinois-Urbana-Champaign, and Marshall Bern at Protein Metrics were critical for the development of mass spectrometry techniques and analysis used. Raghu Kalluri, Michael Duncan, and Valerie Lebleu from Harvard University and Megan Zheng at NC State provided key insights into conducting the immunological staining of the blood vessels.