Researchers Capture First-Ever Images of Atoms Moving in a Molecule

Key to the experiment, which appears in this week’s issue of the journal Nature, is the researchers’ use of the energy of a molecule’s own electron as a kind of “flash bulb” to illuminate the molecular motion.

The team used ultrafast laser pulses to knock one electron out of its natural orbit in a molecule. The electron then fell back toward the molecule scattered off of it, analogous to the way a flash of light scatters around an object, or a water ripple scatters in a pond.

Principal investigator Louis DiMauro of Ohio State University said that the feat marks a first step toward not only observing chemical reactions, but also controlling them on an atomic scale.

“Through these experiments, we realized that we can control the quantum trajectory of the electron when it comes back to the molecule, by adjusting the laser that launches it,” said DiMauro, who is a professor of physics at Ohio State. “The next step will be to see if we can steer the electron in just the right way to actually control a chemical reaction.” 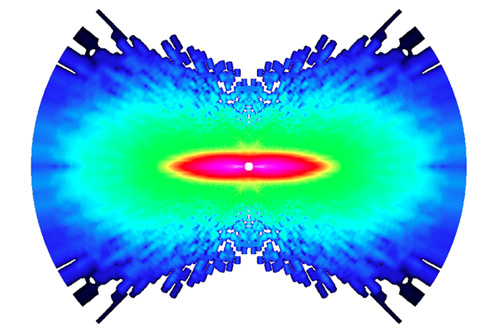 Researchers at Ohio State University and Kansas State University have captured the first-ever images of atoms moving in a molecule. Shown here is molecular nitrogen. The researchers used an ultrafast laser to knock one electron from the molecule, and recorded the diffraction pattern that was created when the electron scattered off the molecule. The image highlights any changes the molecule went through during the time between laser pulses: one quadrillionth of a second. The constituent atoms’ movement is shown as a measure of increasing angular momentum, on a scale from dark blue to pink, with pink showing the region of greatest momentum. Image courtesy of Cosmin Blaga, Ohio State University

A standard technique for imaging a still object involves shooting the object with an electron beam – bombarding it with millions of electrons per second. The researchers’ new single-electron quantum approach allowed them to image rapid molecular motion, based on theoretical developments by the paper’s coauthors at Kansas State University.

A technique called laser induced electron diffraction (LIED) is commonly used in surface science to study solid materials. Here, the researchers used it to study the movement of atoms in a single molecule.

The molecules they chose to study were simple ones: nitrogen, or N2, and oxygen, or O2. N2 and O2 are common atmospheric gases, and scientists already know every detail of their structure, so these two very basic molecules made a good test case for the LIED method.

In each case, the researchers hit the molecule with laser light pulses of 50 femtoseconds, or quadrillionths of a second. They were able to knock a single electron out of the outer shell of the molecule and detect the scattered signal of the electron as it re-collided with the molecule.

The key, explained Blaga, is that during the brief span of time between when the electron is knocked out of the molecule and when it re-collides, the atoms in the molecules have moved. The LIED method can capture this movement, “similar to making a movie of the quantum world,” he added.

Beyond its potential for controlling chemical reactions, the technique offers a new tool to study the structure and dynamics of matter, he said. “Ultimately, we want to really understand how chemical reactions take place. So, long-term, there would be applications in materials science and even chemical manufacturing.”

“You could use this to study individual atoms,” DiMauro added, “but the greater impact to science will come when we can study reactions between more complex molecules. Looking at two atoms – that’s a long way from studying a more interesting molecule like a protein.”

Coauthors on the paper included Anthony DiChiara, Emily Sistrunk, Kaikai Zhang, Pierre Agostini, and Terry A. Miller of Ohio State; and C.D. Lin of Kansas State. Coauthor Junliang Xu pursued the theoretical side of this research to earn his doctorate at Kansas State, and will soon join DiMauro’s lab as a postdoctoral researcher.