A new study in the New England Journal of Medicine documents the high-profile failure of a promising drug, bapineuzumab, to slow cognitive decline in dementia patients. Dr. Stephen Salloway, the study’s lead author, says researchers have learned key lessons that they are eager to apply in new attempts to find effective treatments for Alzheimer’s disease.

PROVIDENCE, R.I. [Brown University] — Dr. Stephen Salloway pulls no punches in describing the results of two clinical trials of the Alzheimer’s drug bapineuzumab that he helped to lead. The antibody failed to produce cognitive improvement for volunteers compared to a placebo, he and colleagues report Jan. 23 in the New England Journal of Medicine.

“It is very disappointing, especially to the terrific and dedicated patients and their famililes,” said Salloway, professor of neurology and psychiatry in the Warren Alpert Medical School of Brown University, director of neurology and the Memory and Aging Program at Butler Hospital, and lead author of the study. “So much effort went into this trial. Alzheimer’s is a difficult and complex disease, and we are moving forward.”

As much as the negative findings stung the patient, medical, and investor communities when they first became public in 2012, Salloway said that in the intervening time, researchers have come to understand several important lessons that they are moving aggressively to apply to a next round of research.

“We don’t have the luxury of time,” Salloway said. “There is an urgency that doesn’t allow us to wait.” 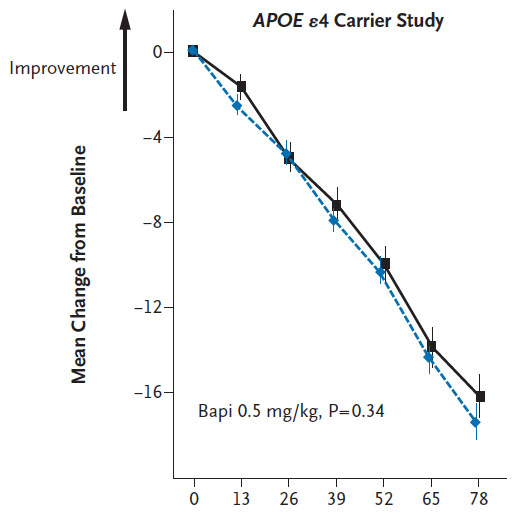 Antibody drugs like bapineuzumab — “bapi” — bind to and trigger clearance of amyloid beta proteins that form harmful plaques in the brains of Alzheimer’s patients. (The antibody solanezumab, which was also tested in trials with similarly disappointing results published this week in NEJM, binds amyloid beta proteins in the blood, helping pull amyloid out of the brain.)

Important lessons of the bapi trials, Salloway said, are to test the drugs only with people who are building up the amyloid beta plaques the drugs address, to give drugs in doses that safely produce greater amyloid lowering, and to combine disease modifying treatments that might be complementary.

Drug combinations rather than single drugs, Salloway noted, have proven to be the answer not only for some forms of cancer, but also for converting other previously incurable problems, such as HIV, into manageable long-term conditions.

Another lesson may be to test these treatments at an earlier stage when amyloid plaques are mounting but before symptoms of cognitive decline have set in. 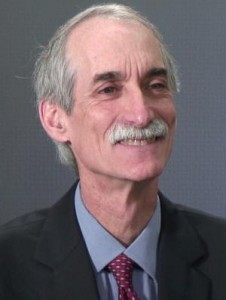 Dr. Stephen Salloway. “We don’t have the luxury of time. There is an urgency that doesn’t allow us to wait. … Without taking strategic risks, we aren’t going to make the progress we need to move forward.” Image credit: Brown University

Salloway and a multicenter team of colleagues conducted two randomized, controlled, double-blinded trials, sponsored by bapi’s manufacturers Janssen Alzheimer Immunotherapy and Pfizer. One trial tested the drug in 1,121 carriers of the APOE gene allele that is associated with a higher risk of Alzheimer’s disease. The other evaluated it in 1,331 people without the allele. All participants were between 50 and 88 years old and had MRI scans and cognitive test scores indicating “probable” Alzheimer’s disease.

Participants received the drug intraveneously every 13 weeks for 78 weeks. At each session they took cognitive tests. Subsets of participants also provided brain scans and fluid samples for various biomarkers, such as levels of amyloid beta plaques and tau protein associated with degeneration of brain cells. Early on researchers stopped administering the highest of three doses because of high levels of amyloid-related “fluid shifts” on MRI, most likely due to changes in amyloid in small arteries.

When researchers tallied the main measures of performance on cognitive tests, it became clear that bapi did nothing significant either for APOE carriers or noncarriers compared to placebo. In each group, cognitive decline continued unabated.

The researchers did find a benefit in two secondary measures: By week 71 they saw that bapi produced a significant reduction in phospho-tau concentration in the spinal fluid of APOE carriers, a indicator of neurodegeneration. In carriers who got the placebo, phospho-tau continued to rise. PET scans also showed less amyloid buildup in carriers who received the drug.

Looking for a breakthrough

“The biggest disappointment from this trial, was that if we had shown benefit with a drug like bapi, it would give people hope that Alzheimer’s is a treatable disease, that we can slow it down,” Salloway said.

That much needed breakthrough could come from new trials that apply the lessons researchers learned. It is likely that many of the participants, for example, had some form of dementia other than Alzheimer’s disease, Salloway said. A future trial should only include those with amyloid buildup confirmed by a PET scan and spinal fluid testing.

“We were surprised to find that overall 20 percent of participants in both the bapi and solanezumab trials did not meet the threshold for amyloid buildup,” Salloway said. “That proportion was higher for ApoE4 noncarriers.”

Also amyloid plays a more critical role early in the development of the disease, he said. Trials that administer the medication earlier could produce greater effects.

It would make sense, he said, to pair drugs like bapi with drugs such as a beta secretase inhibitor that maximize amyloid lowering. The safety of such a combination, or combination with drugs that address the tangles of tau proteins also found in Alzheimer’s, is not known, Salloway said, but needs to be carefully tested.

“Without taking strategic risks, we aren’t going to make the progress we need to move forward,” he said.

Testing drug combinations, however, may require pharmaceutical companies to pool resources and share data. He acknowledged that’s something competitors are usually reluctant to do. These partnerships are forming in the pre-competitive arena, he said, but need to be expanded into clinical trials.

“For the level of suffering with this disease and for our economy, we have to break down some barriers and come up with innovative approaches.”