Research in the news: A 520 million-year-old food plan

Anyone who’s read a children’s menu at a restaurant knows that kids and adults tend to like different foods. New research suggests at least one animal species had the same arrangement half a billion years ago.

It seems the earliest ancestors of spiders and horseshoe crabs, called chelicerates, had separate ecological niches for adults and larvae. They ate different foods, in other words, and did not compete for the same prey. This approach has been seen in many modern animal species, but never in one this old.

An international team of scientists made the discovery, including Yale University paleontologist Derek Briggs and two of his former Yale postdoctoral students, Carolin Haug and Joachim T. Haug, now both at Ludwig Maximilian University of Munich. Briggs is the G. Evelyn Hutchinson Professor of Geology & Geophysics at Yale and curator of invertebrate paleontology at the Yale Peabody Museum of Natural History. 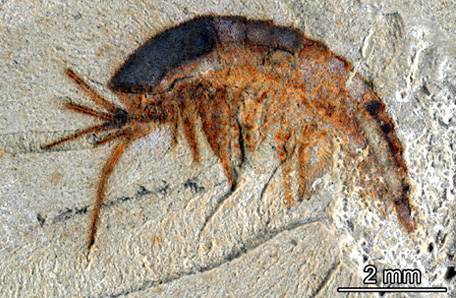 The larval stage of a 520 million-year-old chelicerate, which had different characteristics in its main feeding limb. Image credit: Yale University

While examining a 520 million-year-old chelicerate larva, researchers noticed that it did not have true claws on its first pair of appendages. The researchers interpreted this to mean that juveniles of the species trapped food particles that were suspended in the water to feed themselves. Adults of the species used their claws to capture and eat larger prey.