UA journalism student Amer Taleb has already had a stellar undergraduate career, working in newsrooms across the nation.

Amer Taleb‘s journalistic talent took him to Japan this summer, where he and other winners of the Roy W. Howard National Collegiate Reporting Competition toured multiple cities on a nine-day study trip. While in Hiroshima, he bought a silver keychain in the shape of a coin that was inscribed with a charge to work toward a more peaceful world.

Later in the summer, he traveled to Mexico as part of the United for Service volunteer program. While there, he visited an orphanage in Tepoztlán, where he gave the keychain to a 17-year-old orphan as a reminder that it is possible to rebuild after a crisis.

That act speaks loudly about who Taleb is and what he does as a University of Arizona School of Journalism senior. With a strong global perspective, Taleb is committed to helping those who have experienced extreme struggles in life. 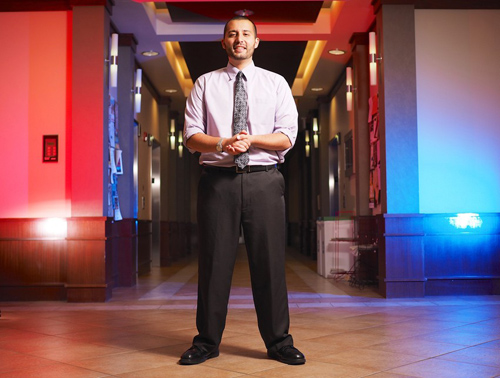 UA journalism student Amer Taleb has held a number of competitive internships where he has been able to write about national and international news. While interning at the Arizona Daily Star, Taleb was a government reporter covering and analyzing government spending. Taleb also wrote about Libyans migrating from Tucson back to the Middle East after the Civil War ended. (Photo credit: Ken Sterns/UANews)

For Taleb, journalism is an important conduit for social change. And while he is still in training, Taleb has gained recognition for his work nationally.

In his years as a UA journalism student, Taleb has worked with Arizona Public Media, the Arizona Daily Star, The New York Times’ Phoenix bureau, The Associated Press and The Nation. He also was an associate producer intern at CNN, assisting with producing on-air segments, writing scripts and editing videos with news anchor Don Lemon. 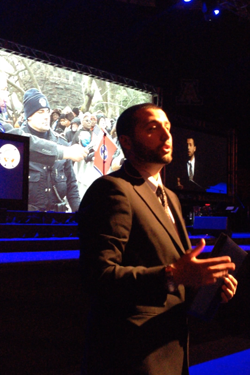 “I’m extremely grateful for what I’ve been able to accomplish,” Taleb said. “If my achievements indicate anything, it’s that I owe so much to so many people.”

Taleb’s accomplishments also drew the attention of UA President Ann Weaver Hart , who wrote in a memo that Taleb “deserves great credit for all of the hard work that has led him to this point.”

In 2013, while working with the Scripps Howard Foundation Wire in Washington, D.C., Taleb reported on the U.S. Supreme Court, covering the landmark Defense of Marriage Act and Proposition 8 cases.

“Those are two of the most monumental Supreme Court cases in recent history, and maybe ever,” said Taleb, also a Chips Quinn Scholar, which is part of a national training program for students interested in journalism. “That I can say I was quite possibly the youngest journalist in that courtroom is extremely humbling.”

“He is one of those people that I had to kick out of the office at 9 at night and tell him to go home and relax a little, just because he is so excited about what he is working on,” Beck said. “He is very talented and passionate.”

That passion was evident from the moment Taleb arrived at the UA. He launched the The Tucson Minaret to cover issues in the Muslim, Arab and refugee communities in Tucson. He also worked alongside Jeannine Relly, an assistant professor of journalism, studying government interaction with journalism in Iraq.

“I have never met a student who has been such an inspiration to fellow students, who has given so much back to the school and to other students,” Relly said. “Amer exemplifies what we would hope for any student, that they take advantage of any opportunity and give back to their profession and to their colleagues.” 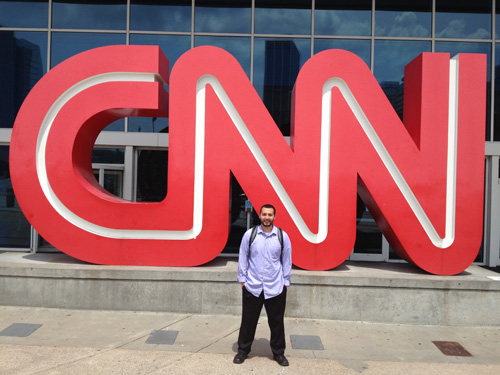 “I learned so much from interning at the world headquarters for one of the biggest news stations.” (Photo courtesy of Amer Taleb)