Recluse or Not? Scientists Use Twitter to Tackle Spider Questions

Recluse spiders, especially the brown recluse (Loxosceles reclusa), are one of the world’s most maligned groups of spiders. Everybody thinks they know someone who’s been bitten by one, but bites are actually uncommon.

To help address fears people may have about recluse spiders – including whether they have encountered one – a team of spider experts from the U.S. and Canada is launching a social media initiative called Recluse or Not?

The project is a collaboration between the University of Toronto’s Catherine Scott, Eleanor Spicer Rice (author of Dr. Eleanor’s Book of Common Ants and the forthcoming Dr. Eleanor’s Book of Common Spiders), and myself. Anyone can send their suspected recluse pictures to us on Twitter at @RecluseOrNot. We will provide an expert’s answer on whether the spider they tweeted us is a recluse spider. 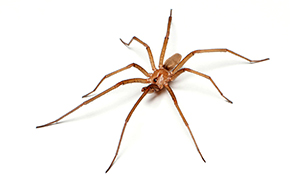 NOT a brown recluse! This is a male Kukulcania hibernalis, or southern house spider. Photo credit: Matt Bertone.

If it is a recluse, we will record that spider’s location and habitat data. If it’s not a recluse, the actual spider species we identify will be noted. We can learn a lot about which spiders are most often confused for recluses and use this information to help educate people about other spiders.

Recluses are not aggressive, and their venom isn’t as dangerous as many people think (though it can be medically important). Unfortunately, recluses have a bad reputation. And because people are afraid of spiders in general, many relatively harmless brown spiders are often mistaken for recluses, even outside their native range – which can lead to unnecessary arachnid carnage.

With Recluse or Not? we hope to provide a platform to clear up these common cases of mistaken identity and educate the public about these spiders. We also hope to find out where these spiders are actually living. While recluses aren’t as widespread as many think, they can be found outside their native range – and that information is worth noting.

For example, sometimes when people move from a place where brown recluses are common, they may spread these spiders to their new house. But recluses don’t live outdoors outside of their native range and don’t spread on their own. We want to know where they are and more about their movement, all while helping the public correctly identify these spiders (and avoid unnecessary panic).

Basically, our goal for Recluse or Not? is to provide a quick and easy way for the public to get an expert opinion, without harming spiders.

As Dr. Eleanor says, “Spiders hold a valuable ecological role in your home, office and yard. With this project, you can get peace of mind without killing them.”