Ready for a Super-Fast Internet? UA Scientists Are Fast at Work on It

The College of Optical Sciences is leading an effort to develop a technology that marries electronics with optics.

Removing barriers along the way to a blazingly fast Internet is the declared goal of scientists at the University of Arizona College of Optical Sciences who are leading an international consortium tasked with developing new technology to make it happen.

In 2008, the National Science Foundation gave a five-year, $18.5 million grant to establish an engineering research center (ERC) that is based at the UA and united with other universities in a collaboration known as the Center for Integrated Access Networks, or CIAN. 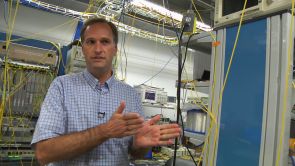 The NSF recently approved funding for the second half of the project, totaling about $17 million, more than half of which goes to the ERC at the UA. Each year, the center also receives roughly $2 million in support from corporate sponsors and an additional $1 million from other agencies.

“Our goal with CIAN is to remove the bottleneck of the Internet so the entire network becomes more scalable,” said Nasser Peyghambarian, director of the ERC and professor in the College of Optical Sciences. “In other words, more users can access it at higher speed, lower cost and lower energy consumption.”

As the number increases of end users accessing the Internet with computers and mobile devices, the network has to grow, become faster or both.

“It’s not going to expand indefinitely, so we have to create new technologies to be able to handle that growing demand,” Peyghambarian said.

The key to accomplishing that goal lies in developing a hybrid architecture that marries electronics and optics, and that is exactly what Peyghambarian and his colleagues are working on at the ERC.

“As an end user right now, you have to rely on electronics for the information you are trying to send or receive through the Internet,” Peyghambarian explained. “Your computer and smartphone are electronic devices. They send electronic signals into the data superhighways of the Internet, and those have always been fiber-optic networks. But the optical signals are being transformed back into electronic signals at the receiving ends. The goal of CIAN is to bring optics closer and closer to the end user.”

“People want more information going to their homes,” added Daniel Kilper, a research professor of optical sciences and CIAN’s administrative director. “Tomorrow’s Internet no longer is about the information superhighway, it’s more about information Main Street or information neighborhood — fiber-optics all the way to the home.”

To achieve that new kind of capability and bandwidth going to individual users, scientists and engineers have to reduce the cost and energy consumption of the photo-electronic components. One of the key technologies developed by CIAN involves arrays of miniaturized mirrors to control laser pulses that in turn modulate high-speed electronic signals, a process known as optical circuit switching.

“We develop new photonic integrated circuits using a technology called silicon photonics,” Kilper said. “We can take all these bulky optical components here and put them onto a chip, and then we can start to integrate that optical chip with the electronic chip, either side by side or even potentially on the same chip to gain efficiency, reduced cost and reduced power consumption so that these devices can be mass-produced and go out to individual users.

“With today’s commercially available systems you can already achieve transmission rates of 400 gigabits per second, but we’re looking at a terabit and beyond,” Kilper said.

The research at CIAN has garnered much industry interest, attracting 20 industry affiliates ranging from hot startups such as Calient and Bandwidth10 to industry heavyweights including Fujitsu, Texas Instruments, Intel and Samsung.

CIAN doesn’t focus on the research alone but plays an important role in education at several levels. Graduate students have gone on to apply their expertise in companies working on making the faster Internet a reality. Some have founded their own companies specializing in integrated optical-electronic circuits; others have embarked on careers at other universities.

In educating students, CIAN follows the guidelines of Engineer of 2020, an initiative spearheaded by the National Academy of Engineering to equip engineering graduates with the skills and knowledge they need to succeed in emerging and future markets.

“Future graduates need to have new capabilities that go beyond engineering,” Peyghambarian said. “They need to be entrepreneurs, and they have to come up with new ideas, so we train our students and put them in workshops to become entrepreneurs of the future.”

In addition to its core funding, CIAN has attracted renewed and additional funding for two three-year programs bringing research experience to undergraduates (REU) and teachers (RET), with a special emphasis on minorities and underserved communities including Native Americans, Hispanics and African-Americans.

“We have been engaged in outreach to Indian reservations, where education and outreach have been received really well,” Peyghambarian said. “In addition, we have a program for veteran education, funded by NSF specifically for that purpose.”

“CIAN illustrates the remarkable diversity of optics and photonics applications pursued by the College of Optical Sciences,” said Dean Thomas Koch. “Our college has a culture of being able to successfully meld basic research, teaching and service to industry, allowing us to offer an unparalleled educational experience for our students. Our faculty and students constantly push the boundaries of what’s possible through discovery and innovations, with breakthroughs in the applications of light that impact virtually every field of science and industry.”