Reading the Classics: It’s More than Just for Fun

EAST LANSING, Mich. — Reading a classic novel such as “Pride and Prejudice” can be entertaining, but, according to new research by a Michigan State University professor, it also can provide many other benefits beyond that.

Natalie Phillips, an MSU assistant professor of English, and her team placed study participants in an MRI machine and monitored their brain flow while reading the works of Jane Austen.

The results, she said, were surprising, in that blood flow was increased in areas of the brain far beyond those responsible for what cognitive scientists call “executive function,” regions normally associated with tasks that require close attention, such as studying, doing complex math problems or reading intensely.

“What took us by surprise is how much the whole brain transformed in shifting from pleasure to close reading, and in regions far beyond those associated with attention and executive functions,” Phillips said. “In one subject, for example, we saw literary analysis activating areas of the brain that we use to place ourselves spatially in the world and areas dedicated to physical activity.”

Phillips said this work could shed new light on the debate regarding the value of studying literature and majoring in the humanities. 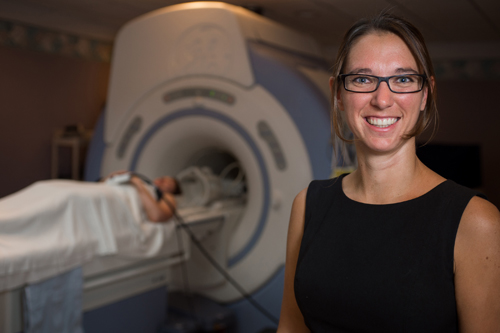 MSU assistant professor of English Natalie Phillips headed a study in which a person's brain flow was monitored while reading the works of Jane Austen. Preliminary results indicate reading activates regions of the brain not necessarily devoted strictly to reading. Photo by G.L. Kohuth.

“It’s early, but what this research suggests so far is that core skills in the liberal arts have immense cognitive complexity,” she said. “It’s not only the books we read, but also the act of thinking rigorously about them that’s of value, exercising the brain in critical ways.”

The work also brings together scientists and literary scholars to explore the relationship between reading, attention and distraction.

Phillips, who is writing a book on the history of distraction in the 18th century, argues that today’s complaints about inattention and diverted minds are far from a modern phenomenon. Writers in the 18th century, she said, lamented that reading occurred in an environment of “total cacophony” and, like their modern counterparts, were concerned with short attention spans.

An MRI of one of the subjects taking part in a study measuring a person’s brain flow while reading the works of Jane Austen. This particular image demonstrates distinctive increases in blood flow for close reading across multiple brain regions, with strength of activation shown in red for horizontal cross sections of the brain. Image credit: Michigan State University

“By contrast, our research suggests that modern students are far more able to refocus attention than we’d expect, even inside a loud, distracting scanner,” Phillips said. “If our early results hold, it will suggest that literary study can shape not only how we read, but also how we pay attention, training cognitive flexibility, and encouraging us to use new brain regions.”

Phillips started this research at Stanford, where she earned a Ph.D. in English and did a postdoctoral fellowship. The 18 participants in her study of Jane Austen were doctoral students studying literature from Stanford, Berkeley and San Jose State.

A faculty member in the College of Arts and Letters since 2011, Phillips plans to continue similar research at the MSU Digital Humanities and Literary Cognition Laboratory, which she co-founded.

“I’ve been delighted by the excitement surrounding this work, particularly from our students,” she said. “I couldn’t have a better team.”