Rare Find from the Deep Sea

Deep-sea dumbo octopuses, with their large eyes and round fins that resemble elephant ears, are arguably one of the most endearing creatures of the deep. They’ve also been one of the most mysterious, because these small animals inhabit the largely inaccessible, deep and dark depths of the ocean floor.

For the first time ever, a team of international researchers were given the rare opportunity to observe and film a dumbo octopus—measuring just a few centimeters—hatching from its egg during an expedition to explore a chain of underwater mountains off the U.S. East Coast in 2005. Their findings were published Feb. 19, 2018, in the journal Current Biology.

“It was the first time that such a deep-sea octopus was observed directly during hatching,” says Liz Shea of the Delaware Museum of Natural History and lead author of the study. The team also included scientists from the University of Bonn, the University Hospital Münster, and the Woods Hole Oceanographic Institution (WHOI). 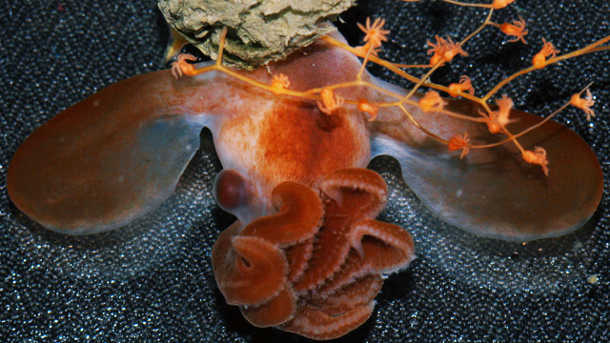 The octopus egg was brought onboard the U.S. research vessel Ronald H. Brown attached to a cold-water coral branch, which is where adult females apparently prefer to attach their egg cases. A remotely operated vehicle gathered the coral sample at a depth of almost 2,000 meters (6,600 feet).

“Witnessing the hatching upon its emergence from its egg case was a one of kind observation, a watershed moment that casts the first light on a completely unknown portion the life cycle of dumbo octopods in the deep sea,” says Tim Shank, a deep-sea biologist at WHOI and coauthor. “What’s also amazing was that we observed many of these egg cases during the expedition, and they were always on the same few types of coral species, and then only a single egg attached to a single coral colony.”

After placing the octopus in a container of seawater after it hatched, the researchers were surprised to see the animal immediately started moving its fins in synchrony.

“As the video by Dr. Shank shows, the dumbo octopus immediately behaves like an adult animal about ten times its size,” says coauthor Alexander Ziegler from the Institute of Evolutionary Biology and Ecology of the University of Bonn.

To find out more about this rare specimen, members of the research team at the University Hospital Münster took a look inside using a high-resolution magnetic resonance scanner. Using MRI images, the researchers created an interactive three-dimensional model of the internal organs of the small deep-sea octopus.

“Particularly striking was a large yolk sac, which serves as a nutrient source directly after hatching, until the young animal can independently capture tiny crustaceans in the deep sea,” explains Dr. Ziegler.

The scientists were surprised how much the structure of other internal organs and of the nervous system resembled that of adult animals.

On the basis of the size ratios and shape of the internal organs, it was possible to assign the rare specimen to the dumbo octopus genus Grimpoteuthis, an absolute novelty for young dumbos.

“It was unfortunately not possible to determine the species, because egg and hatchling may belong to a species yet unknown to science,” says Shea.

The team says the study emphasizes the importance of protecting this sensitive deep-sea habitat, which is still largely unknown. Deep-sea trawling and mining operations endanger the habitat of deep-sea corals and all organisms associated with these animals, some of which have not yet been researched.