While reviewing many years of satellite data from NASA and the European Organisation for the Exploitation of Meteorological Satellites (EUMETSAT), NC State atmospheric scientist Sandra Yuter and her team noticed abrupt clearings of cloud cover off the coasts of Namibia and Angola.

“Large areas of low cloud are a normal feature over the ocean in the subtropics west of continents,” Yuter says. “What is unusual in this case is that the cloud erosion occurs rapidly along an organized line hundreds of miles long, like a sun shade being pulled away. The lines can move west for a day or more and clear out a cloud area more than twice that of California.” 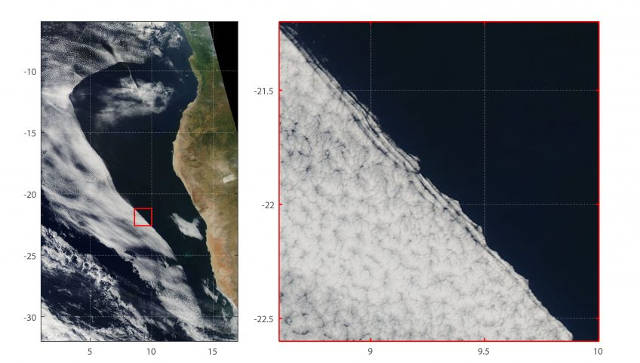 Westward-moving cloudiness transition in the southeast Atlantic off the coast of Africa at 130 pm local time on 26 May 2014. (left) regional view and (right) close up. Image credit: North Carolina State University

The rapid cloud removal events happen throughout the year and peak in May – occurring on over half the days of the month. Yuter and her team noted that the wind direction at cloud level was often perpendicular to that of the clearing. This shows the cloud is not pushed away by the wind. The clearings start off the coast around midnight and continue through the night and the following day, suggesting that solar heating does not cause these events. “This kind of cloud erosion has never been documented before,” Yuter says. “How it happens is still a mystery, although we theorize that atmospheric gravity waves are the most likely mechanism.

“These waves cause up-and-down motions in the atmosphere, akin to a boat bobbing on the ocean. We hypothesize that offshore winds from Africa interact with stable air over the ocean to make these waves, which then move through the cloud field and promote mixing and cloud evaporation.”

Yuter believes that this discovery will improve scientists’ understanding of climate processes. “We were very surprised by what we found,” she says. “This is a way of changing large cloud areas that has not been documented before. Scientists are interested in anything that changes the area of low clouds over the ocean because these clouds reflect sunlight and cool the Earth.

“Understanding how this happens will help us predict what might happen to clouds in a warming climate,” Yuter adds. “It’s about the balance of warming and cooling effects – and this is one of the pieces that make up that balance.”

The research appears in Science, and was supported by the National Science Foundation (AGS grants 1656237 and 1656314) and the U.S. Department of Energy (grants DE-SC0006701, DE-SC0006736 and DE-SC0016522). Yuter, Distinguished Professor of Marine, Earth and Atmospheric Sciences, is both first and corresponding author of the work. NC State senior research scholar Matthew Miller, former NC State graduate student John Hader, and David Mechem, associate professor in the Department of Geography and Atmospheric Science at the University of Kansas, contributed to the work.