As Curiosity, the Mars Science Laboratory rover, gets set to land in the wee hours of Monday morning, Brown geologist Ralph Milliken will be getting ready to get to work. He’s a member of the mission’s science team. His curiosity lies in finding out why Mars is a colder, drier place than it used to be.

PASADENA, Calif. [Brown University] — Ralph Milliken, assistant professor of geological sciences, is on the science team of the Mars Science Laboratory (MSL), which is set to land the rover Curiosity on the Red Planet in the early morning of Aug. 6 Eastern Daylight Time. The rover will allow the team to study the rocks and soils of Gale Crater, giving scientists years of data to help them learn the geological history of the planet. If there are signs of water or organic material, Curiosity can find those, too. 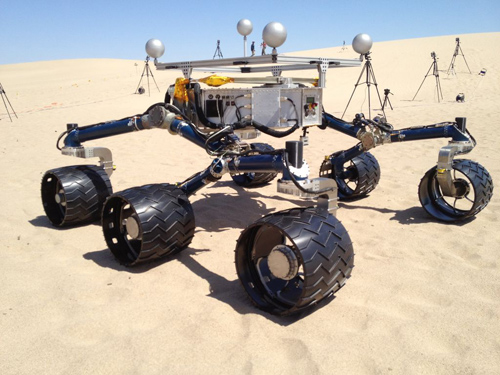 If it only had a brain NASA engineers took a test rover for a practice drive on California sand dunes. The test version, called Scarecrow because it doesn't have a computer brain like the Mars-bound Curiosity rover, has a full-scale version of Curiosity's mobility system, but is missing parts in order to keep its weight about the same on Earth as Curiosity will weigh in the lesser gravity of Mars. Image credit: NASA/JPL-Caltech

For the first 90 days of the mission, Milliken will live in Pasadena at NASA’s Jet Propulsion Lab. His work schedule will be based on the days, or “sols,” of Mars, which are 40 minutes longer than Earth’s days. He’ll work with other scientists and engineers to decide what the rover does every day, including which samples to zap with its laser or bore into with its drill. Milliken spoke about the mission with David Orenstein.

What has your role been on the MSL and Curiosity rover project?

When I worked at JPL [2007–10] I was involved in helping to look at the landing sites people were proposing, looking at the issues such as slopes and the local geology at those sites. In the spring of 2007 I acted as a human “rover” during a slow-motion field test near the Guadalupe Mountains, a test that was designed to help the science team prepare for operations on Mars, but after I left JPL I had no formal role on the MSL project. NASA then put a call out for people to write proposals to become a participating scientist for the mission. I was fortunate enough to be selected and am now a member of the science team.

As part of the team, I’ll work with everyone else to look at the data, determine which instruments we want to use and for which purpose, which rock we might want to drill into, and make the case for the day-to-day science operations within the overall strategy to make sure the rover is accomplishing the mission’s goals. 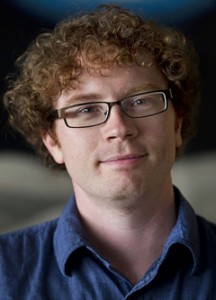 Ralph Milliken. “We’ll actually live on Martian time. ... A Mars day is about 40 minutes longer than an Earth day and so every day our schedule shifts by at least 40 minutes. Image credit: Mike Cohea/Brown University

What do you hope the mission will tell us about Mars?

In the grandest sense I want the mission to tell us more and something new about the geological history of Mars. The Curiosity rover is not strictly a life-detection mission. It is a mission that’s designed to go to a place on Mars and provide us information to be able to determine if that place had the right ingredients to be habitable for life. It has the capability to detect organic material if it happens to be present in the rocks or soil, but preservation of organic material over billions of years is hard on Earth, and the same can be expected for Mars.

What would be interesting to see, as it climbs this mountain of rocks in Gale Crater, is if the rocks can give us some better insight into why Mars seems to have dried out over time billions of years ago. The evidence suggests that Mars may have been warmer and wetter 4 to 4.5 billion years ago. Today it is a very cold and arid environment. That transition from wetter and warmer to colder and drier, from what we understand, probably happened about 3 to 3.5 billion years ago. The question is why did that happen? Why did Mars take a different evolutionary pathway than Earth? What does such a drastic change on a global scale imply about the possibility of life on ancient Mars?

How is the rover equipped to help answer those questions? What kind of data will it gather?

The rover has a ton of different cameras. Some of them are for hazard avoidance and navigation, but there is a more sophisticated camera system on the mast of the rover that will be able to do 360-degree panoramas at a number of different wavelengths of light. That gives us the color images we can use to assess the local geology and search for variations in the minerals that are present.

It also has an instrument called ChemCam that shoots a laser at rock or soil targets and vaporizes them. We can look at the plasma that is created in this process and identify the chemical signatures of the rocks and soils that have been zapped by the laser, so this is one of our primary remote sensing tools for determining which rocks we might want to drive up to for additional analyses.

There is also a meteorology instrument on the rover that can tell us about the daily weather, including temperature, winds speeds, humidity and atmospheric pressure.

The rover can actually go up to rocks, reach out with its arm and drill into them, or scoop up the soil it’s driving over. It can take that rock or soil, crush it up and pass it to instruments on the body of the rover. On board the rover there’s an x-ray diffraction instrument, called CheMin, that we can use to get definitive mineralogy of the rocks and soils. That’s a new technology for Mars. Another major instrument is SAM, which can tell us about the composition of atmospheric gases as well as gases evolved from rocks and soils by heating them to very high temperatures. SAM is an important instrument in that it can detect tiny amounts of elements that are important building blocks for life as we know it, including carbon, sulfur, phosphorous, and nitrogen, and their different isotopes. That’s the instrument that will be able to detect organic matter should it be present. Another instrument called DAN is a neutron detector that can be used to detect neutrons coming from the surface or to send neutrons down to see how they are scattered back. That can tell us about the distribution of hydrogen in the subsurface as the rover drives along. The distribution of hydrogen tells us about the distribution of water or water-bearing minerals within the upper meter or so below the rover.

The primary mission is for one Mars year, which is nearly two Earth years. We hope that if things are going well it will keep getting extended.

During the first 90 days, or 90 sols as we call them on Mars, we’ll actually live on Martian time in residence at the JPL. Even though the rover is nuclear powered, rather than solar powered like [previous rovers] Spirit and Opportunity, most of the rover operations take place during the daylight hours on Mars. Because of that we have to live on Mars time.

A Mars day is about 40 minutes longer than an Earth day and so every day our schedule shifts by at least 40 minutes. It may be a little bit more because the schedule depends on when the orbiters pass over to relay the data.

I haven’t lived on Mars time before but I know people who have done it for the other rovers. It can be quite disorienting. Blackout shades and curtains in your apartment are a must. After the first several months of the mission people will be able to go back to their home institutions and do things remotely from there, and after a while hopefully everyone will be comfortable enough controlling the rover that we can do more planning in advance and live on Earth time.