UA Professor Alison Hawthorne Deming is a highly regarded poet and essayist who, at most every turn, works to translate matters of science and nature into poetry and prose.

Consider your tactile and sensory reality.

For some, the sound of birds stirring awake with the dawn of day, the plop fish make when hitting water, the strong scent of sagebrush and moist pine or the feel of soft soil underfoot are all foreign.

Given the tremendous rate of scientific and technological advancements at a time when people are increasing moving to urban areas, the bond between humans and the natural world seems, at times – and is, indeed, for some – strained.

But the association is not foregone. 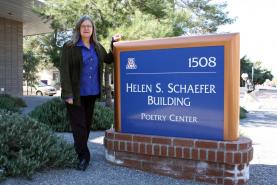 This means the role of writers, artists and performers is ever-more important, said Alison Hawthorne Deming, a University of Arizona creative writing professor.

“Many of us who feel deeply connected to the life of the planet know we don’t have all the answers. We are looking for unexpected connections,” Deming said, adding that this requires “people to be very observant in terms of our own world.”

Deming is part of an expanding crop of individuals in the arts and humanities connecting more readily with the scientific community.

Whether it be at the UA, in the western region Oregon’s Cascade Range or, most recently, in Brazil, Deming’s intent is to communicate to the greater populace the importance of contact hours with the natural world.

Through her work, Deming wants to help raise the public consciousness while conveying the importance about scientific research in ways the public can understand. 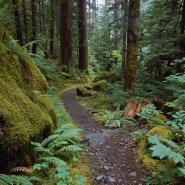 With more and more people moving into urban areas and certain economic barriers, many do not have regular access to the unaltered Earth. But writers like Alison Deming are invested in sharing a connection to the natural world, and exploring scientific endeavors, through the arts. Image credit: University of Arizona

She’s written about mountain slopes, millions of years in the making, and hikes in the Santa Rita Mountains. She’s described the movement of water and has traced human-land interactions in narratives about villages meandering with indentations in the landscape.

“I’m interested in how metaphor helps us in writing to make unexpected connections,” she said.

“The language of science may have a very objective meaning, but when a poet or essayist picks up that language, it may strike in a slightly more complex way that stirs up our imagination and that emotional response.”

Deming also has written about devastation stemming from both natural and human-caused phenomenon, with Hurricane Katrina and climate shifts being among them.

“I think most of us want to do the right thing and not leave a parched planet behind,” Deming said.

“There is a lot of anguish in the world, and I meet a lot of people who are desperate and think it’s too late,” she said. But writing “gives them hope.”

Others at the UA have and continue to do comparable work. The Confluencenter for Creative Inquiry and the School of Information: Science, Technology & Arts, or SISTA, have each supported connections between scientific and artistic endeavors; Diana Liverman, co-director of the UA Institute of the Environment, has written about how the arts and humanities can move humans to connect with the natural world; and the UA College of Letters, Arts and Sciences has placed a heavier emphasis on interdisciplinary work between the arts and sciences.

For Deming, her work is not merely to translate scientific jargon into digestible layman’s talk.

Instead, her life’s work has to been to describe science through the a lens tempered by spirituality and emotion in ways the describe “how we inhabit this world.” said Deming, an award-winning and widely published poet who has received honors for her work.

“The question is no longer about what is wild and what is not wild,” she said. “It’s about the quality of life for us all.”

Over the last several years, Deming has held a residency at the HJ Andrews Experimental Forest, a long-term ecological research site located in Oregon’s Cascade mountains.

“This is an experiment to see what happens when scientists and writers come together,” said Deming, who wrote about her experiences in the recently published book, “The Way of Natural History.”

The book, edited by Thomas Lowe Fleischner, a faculty member at Prescott College, features more than 20 other contributors who are scientists, poets, writers and practitioners.

Deming also has traveled to other parts of the U.S. and world, connecting with organizations and foundations.

In addition to her work with the Andrews Experimental Forest, Deming has held numerous other residencies, including those at the Djerassi Foundation and The Island Institute in Sitka, Alaska.

This summer, she traveled to Brazil to participate in the International Writing Program, a writing residency where she and others engaged in a literary exchange with students, faculty members, writers, artists and other cultural ambassadors along with students of all ages. While there, Deming maintained the Brazilian Notebook at Terrain.org, of which she is an editorial board member.

Now, Deming is back in New Brunswick, Canada where she is wrapping up another collection of writings, a nonfiction book titled “Zoologies: On Animals and the Human Spirit,” which is expected to go to print sometime next year.

“When you get into essay writing and poetry, there is a personal voice. And literature – it’s always about empathy, whereas science is about information and the advancement of knowledge,” Deming said.

Words will have different meanings depending on a person’s personal context, whether related to experiences, values or beliefs. Whatever your beliefs, Deming is just pushing for an epiphany.

“The arts draw people together, giving them an experience around which we can connect. We’re in a new period,” Deming said. “I just want people to fall in love with this planet. This has become the center of my work.”