About 42 miles southwest of San Francisco and 2,600 feet underwater sits the U.S.S. Independence, a bombed-out relic from World War II. The aircraft carrier was a target ship in atomic weapon tests at Bikini Atoll in the Marshall Islands after the war. Then, in 1951, it was loaded up with 55-gallon drums of low-level radioactive waste and scuttled just south of the Farallon National Wildlife Refuge off the California coast.

Earlier this year, the U.S.S. Independence was rediscovered by a team of researchers led by James Delgado, the director of Maritime Heritage at the National Oceanic and Atmospheric Administration (NOAA). The marine archaeologists used sonar from an autonomous submarine to find the wreckage, but with the ship’s radioactive past, the scientists wondered how safe it would be to actually explore.

An image of the USS Independence from the Coda Octopus Echoscope 3D sonar, which was integrated on the Boeing Autonomous Underwater Vehicle (AUV) Echo Ranger. Image credit: NOAA and Coda Octopus

Delgado turned to Berkeley Lab’s Kai Vetter to better understand the radiation hazards. Vetter is the head of applied nuclear physics at Berkeley Lab, nuclear engineering professor at the University of California, Berkeley, and the co-founder of the Institute for Resilient Communities. “They wanted to know if we could ensure the safety of their equipment,” says Vetter, “and to see if you’d pick up contamination if you went down there.” 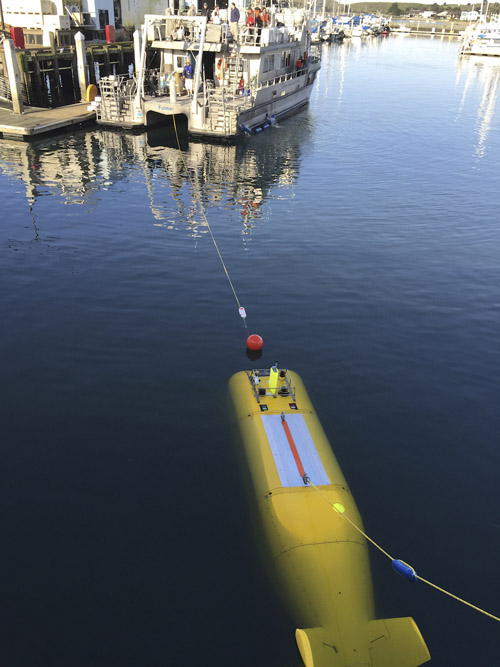 The short answer, Vetter says, was that neither the submersible nor the team was ever in danger of contamination.

One reason is that water is an excellent radiation shield. Under water, radiation will only extend several inches from contaminated materials, says Vetter. The unmanned research submarine stayed at least 100 feet away from the wreck. 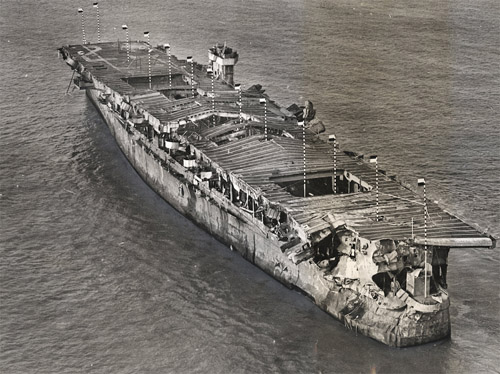 Relatedly, while a relatively small number of organisms close to the wreck might take up some of these rust particles, the effects of radioactivity are diluted through the food chain because the number of organisms exposed is so small. In contrast, mercury is much more prevalent and widely distributed in the ocean, and this is why its concentration builds up in the food chain. 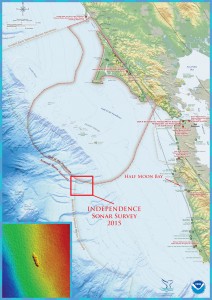 The shipwreck site of the former aircraft carrier, Independence, is located in the northern region of Monterey Bay National Marine Sanctuary. Half Moon Bay, California was the port of operations for the Independence survey mission. The first multibeam sonar survey of the Independence site was conducted by the NOAA ship Okeanos Explorer in 2009. Image credit: NOAA’s Office of Ocean Exploration and Research and NOAA’s Office of National Marine Sanctuaries (click image to enlarge)

And finally, says Vetter, it’s important to consider the half-life of the radioactive materials. In this case, the isotopes of concern are cesium 137 and strontium 90, which both have a half-life of about 30 years. This means that after 30 years, half the isotopes responsible for the initial contamination transmute into other non-radioactive isotopes. It’s been over 60 years since the U.S.S Independence was scuttled, which means that less than a quarter of the initial radioactive isotopes remain.

Still, to demonstrate with data, Vetter brought a team of researchers and students to the harbor in Half Moon Bay, CA to test the submersible after it had captured sonar images of the aircraft carrier. Armed with instruments called dosimeters that pick up ionizing radiation, the researchers found no evidence of contamination on the submersible. It wasn’t a surprise, says Vetter, since the craft never got close enough to the ship and even if it had, the contamination would have diluted away as it was tugged back to shore.

The NOAA expedition collected its sonar images from a distance, but Vetter hopes to someday work with a submersible that gets an up-close view of the ship, the 55-gallon barrels, and the radioactivity. Such a project would require a specially designed detector to read the radiation on site, Vetter explains. “It would be exciting to build a dedicated system with some advanced technologies to figure out what is sitting down there in that old vessel,” he says.

For more information about the U.S.S. Independence go here.

For more information about the Institute for Resilient Communities go here.