A new study reports that anammox, a key process in the nitrogen cycle, is barely present in Narragansett Bay even though it’s a major factor just a little farther out into Rhode Island Sound. Scientists traced that to differences between bay and sound sediments, but that raises new questions about what’s going on in the Bay to account for those.

PROVIDENCE, R.I. [Brown University] — Rhode Island’s geography is famously small, but new measurements of the nitrogen cycle in its waterways suggest that even over a small distance, differences can be huge. Scientists report that the nitrogen-converting process anammox is almost completely absent in Narragansett Bay, even though it is going strong in Rhode Island Sound only 15 miles off the coast.

The novel and somewhat surprising finding, documented in the journal Limnology and Oceanography, raises intriguing questions about why the bay seems inhospitable to an important environmental process, said corresponding author Jeremy Rich, assistant professor of ecology and evolutionary biology at Brown University.

“Past research suggested anammox might be increasing in importance in the bay, but there was not any data to back it up. What we’re showing is it’s barely even there,” Rich said. “What’s wrong with the nitrogen cycle in lower Naragansett Bay? Why don’t we have anammox? Have we disturbed it to the point where we are missing this process?” 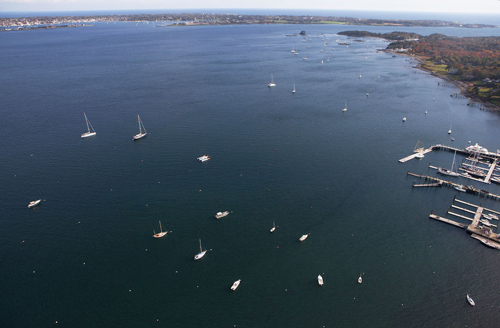 Short distance, large difference. Out in Rhode Island sound, the anammox process is a mainstay of the natural cycle that returns sedimentary nitrogen to the atmosphere. In Narragansett Bay, anammox is almost completely absent. Why? Image credit: Mike Cohea/Brown University

Anammox — anaerobic ammonium oxidation — was only recently discovered and remains incompletely understood. It is one of two ways that nitrogen in various forms in seafloor sediments is converted back into its inert form (N2) that composes 80 percent of the atmosphere. The other process is denitrification. This conversion is not only a key step in the Earth’s vital nitrogen cycle, but also it contributes to the health of waterways by removing excess nitrogen that can fertilize harmful algae blooms.

For their study, researchers including lead author Lindsay Brin sailed to the sites on the fishing vessel Virginia Marise every season over two years. They took measurements and collected sediment cores from the Providence River Estuary, Naragansett Bay (into which the estuary feeds), Rhode Island Sound (into which the bay opens), and the neighboring Block Island Sound.

They looked at key measures of oxygen, nitrate, nitrite, and ammonium and organic matter in the sediments and measured environmental conditions such as salinity and temperature at the sites. They also performed experiments on the sediment cores to determine their potential denitrification and anammox rates.

What they found was that in the sounds annamox contributed between 8 and 42 percent of the N2 produced (denitrification produced the balance), while annamox produced no more than 4 percent of the N2 in sediments from the estuary or the bay.

Anammox activity wasn’t seasonal in either locale, they found, and the waters were comparably salty. What did differ, however, was that compared to the sediments of the sounds, the estuarine and bay sediments had less oxygen mixed in and therefore less nitrate. Those factors were associated with less anammox activity.

So the questions Rich is now asking come down to why oxygen and nitrate levels vary in sound and bay sediments.

One of Rich’s observations has been that in the sound’s sediments, but not the bay’s, little shrimp burrow and effectively promote the mixing in of oxygen.

It’s speculation to blame a lack of the shrimp for the bay’s dearth of anammox, Rich said, but it is a new hypothesis worth consideration. In the meantime, what the new study suggests is that Rhode Island’s bay waters somehow lack the proper conditions to activate an important process in returning nitrogen from the sea to the air.

At the time of the work, Brin was a graduate student affiliated with Brown and the Marine Biological Laboratory in Woods Hole, Mass. Now she’s at the Potato Research Centre in New Brunswick, Canada. Co-author Anne Giblin is a senior scientist at MBL.