Questions for Peter Schultz: What can we learn by landing on a comet?

Brown geoscientist Peter Schultz, a veteran of three NASA missions to comets and asteroids, talks about the European Space Agency’s mission to land on a comet and what the scientific community hopes to learn about these orbiting bodies.

PROVIDENCE, R.I. [Brown University] — On Wednesday, Nov. 12, 2014, the European Space Agency landed a spacecraft on the surface of a comet for the first time. Scientists hope data returned from the Rosetta spacecraft’s Philae Lander might not only offer a new perspective on the nature of comets, but also shed light the evolution of the solar system.

Brown geoscientist Peter Schultz, who was not involved in the ESA mission but is a veteran of three prior missions to comets and asteroids (NASA’s Deep Impact, Stardust-NExT, and EPOXI missions), spoke with science writer Kevin Stacey about Rosetta.

Can you give us a bit of background on this comet?

This particular comet (officially, 67P/Churyumov-Gerasimenko) goes around the sun about every 6.5 years and was discovered by two Ukranian astronomers (Klim Churyumov and Svetlana Gerasimenko) in 1969. As happens to many short-period comets, it was tugged by Jupiter’s gravity during a close encounter early in 1959. This tug changed its orbit, reducing its closest approach to the sun from 2.7 times the distance from the Earth (an astronomical unit, AU) to the sun to only 1.3 AU. The nucleus rotates on its axis every 12.4 hours but has changed due to jets of gas and dust that are released every time it gets close to the sun. As we now are finding out, cometary nuclei come in all shapes and sizes. This particular nucleus has two large lobes. One is about 2.5 miles across; the other is about 1.5 miles.

Why was this comet chosen as a target for Rosetta and Philae?

This comet was not the first choice for the mission, but the rocket that was to carry the spacecraft failed in 2002, which caused a delay. The orbit of this particular comet, however, allowed doing the same mission design, with a few tweaks. The key was to identify a comet that would allow a slow approach to the nucleus so that the spacecraft could rendezvous and then orbit. 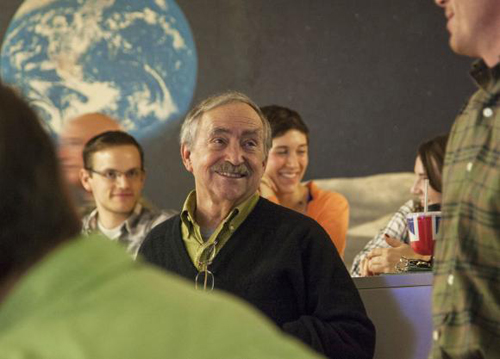 Critical moment. Peter Schultz and colleagues react to news that the ESA’s Philae Lander has reached the surface of the comet. Photo credit: Mike Cohea/Brown University

Could you talk about some of the technical challenges involved in landing on a comet?

ESA scientists and engineers knew that it would be difficult to land on a cometary nucleus, especially because nothing was known about its surface. In fact, the mission was launched in 2002, before NASA’s Deep Impact mission saw the nucleus of 9P/Tempel 1 close-up for the first time, and before we knew anything about the density of a cometary nucleus. As Rosetta first captured its close-up view, it was clear that this nucleus was very different: patches of smooth surfaces, irregular depressions with steep-sided cliffs, and block fields. The Philae Lander will touch down in one of the smooth patches, approaching the surface at around two miles per hour (a slow walking pace). Certain areas look like soft snow while others regions are filled with blocks. As a result, it may be difficult to grab hold or stay put. Engineers designed “harpoons” that should have grabbed on while the lander’s legs are designed to keep the Lander from bouncing off. That’s critical because the escape speed is only about 1 mile per hour.

What kinds of experiments will Philae be carrying out on the surface?

Experiments on the lander make a wide range of measurements including the composition at the comet’s surface, the strength and density of the surface, temperature, the nature of compounds from about nine inches below the surface (using drills and instruments), isotopic ratios, magnetic field measurements. One instrument will probe the interior of a nucleus for the first time by sending radio waves from Philae to the orbiting Rosetta. Another will listen to the inside of the nucleus as it cracks and creeks when gas is released. This is like geophysicists and geochemists exploring a field site on Earth, but millions of miles away.

What, ultimately, do scientists hope to learn by actually landing on a comet?

In 2005, Deep Impact slammed into the nucleus of a comet in order to expose and measure ices and dust below. This time, Philae provides a softer touch. There’s much to be learned by landing on the surface. One of the key measurements is the relative abundance of heavy and light hydrogen, which may be a key to understanding the source of water on Earth. In addition, a lander is the only way to understand more about the strength of the surface and to understand how its atmosphere (the coma) changes as the comet goes around the sun. If successful, scientists will have a better understanding of how comets work.