Warming water over the past 150 years is causing declining fish stocks in Lake Tanganyika, a large freshwater lake that supplies food for millions of Africans.

PROVIDENCE, R.I. [Brown University] — A new study finds that a decrease in fishery production in one of the largest freshwater lakes on Earth is a consequence of human-caused climate change rather than just overfishing. 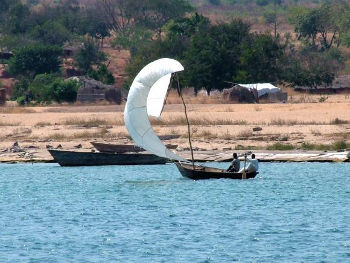 Commercial fishing in lake Tanganyika intensified in the 1950s, but fish stocks started declining before then, according to new research. That suggests that waters warming due to climate change are partially to blame for the decrease in fishery production. Image credit: Jim Russell / Brown University

The research, published in Proceedings of the National Academy of Sciences, used sediment cores from the bottom of Lake Tanganyika in southeast Africa to create a 1,500-year record of temperature in the lake, as well as a record of animal fossil abundances over time. The study found that as temperature in the lake increased — with a substantial spike in the industrial period of the last 150 years — the abundance of fossil fish, mollusks and other organisms decreased. The decline in fish fossils began well before commercial fishing in the lake intensified in the mid-20th century, suggesting climate change is playing a substantial role in the lake’s decreased production.

The findings suggest that the effects of climate-related ecological change should be taken into account when determining catch limits and other sustainable management measures. The study also raises concern about how other tropical freshwater lakes might be affected by warming climate.

Andrew Cohen, a professor at the University of Arizona, led the new study. Jim Russell, associate professor of Earth, environmental and planetary sciences and a fellow at the Institute at Brown for Environment and Society, is a co-author of the new research and has conducted fieldwork in Lake Tanganyika for the past 20 years. He discussed the new findings in an interview.

Can you provide background on Lake Tanganyika?

Lake Tanganyika is in southeastern tropical Africa at the boundary between Tanzania, the Democratic Republic of the Congo, Burundi and Zambia. It is the largest and oldest rift lake in Africa and one of the largest lakes on Earth. At about 700 km long, 50 km wide and 1.5 km deep, it contains roughly 15 percent of all of the fresh water at the Earth’s surface. It is also one of the most biologically diverse lakes on Earth. It holds over 300 species of fish, many of which are endemic to Lake Tanganyika, as well as hundreds of endemic species of snails, shrimp, crabs and other crustaceans.

In addition to its geological and biological significance, the lake is very important to the regional economy. Commercial fisheries have been operating on Lake Tanganyika since the mid-1950s, and Tanganyika fish are exported throughout East Africa. The lake’s fishery provides 25 to 40 percent of the animal protein in the diet for the millions of people that live near the lake, and the regional fishery is an important source of revenue and employment for local people.

This latest finding builds on work you’ve been doing at Lake Tanganyika for quite some time. Can you explain some of your prior findings?

Over the last 20 years there has been growing concern about the impacts of anthropogenic climate change on East Africa’s lakes and Lake Tanganyika in particular. In temperate systems, such North America’s Great Lakes, we have fairly long observational records that document the degree of warming during the last century. No such data exists for Lake Tanganyika.

To better understand recent on ongoing climate impacts on Lake Tanganyika, my former Ph.D. student Dr. Jessica Tierney and former Brown undergraduates (now alumni) Natacha Meyer and Marc Mayes and I analyzed sediment cores in the lake. By measuring chemical indicators of temperature preserved in these layers, we were able to develop a record of the lake’s temperature since 500 A.D. This culminated in a paper published in Nature Geosciences in 2010, which showed that the lake has warmed rapidly during the last century and has reached temperatures that exceed any observed during the past 1,000 years. We were also able to measure indicators of the biological productivity during this time to examine the impacts of warming on the lake ecosystem. This work showed that lake warming suppresses biological productivity, which could threaten the lake’s fishery.

How did you arrive at the findings for this new study?

Our previous work focused largely on understanding the physical impacts of warming on Lake Tanganyika. Our new study uses an expanded set of sediment cores from all over the lake to examine the impacts of lake warming on Tanganyika’s fish, mollusks and other organisms. Similar to our previous work, we conducted layer-by-layer analyses of sediment cores working further and further back in time.

In this study, however, we measured not only lake temperature, but also counted the number of fish, snail and crustacean fossils and examined changes in the abundance of these organisms in relation to changes in lake temperature. We found that lake warming, and particularly the unprecedented warming in the last 100 years, has resulted in large declines in the abundance of fish, snails and other organisms. The fish decline started before there was much commercial fishing in the lake, which ramped up in the middle of the last century. So we were able to conclude that temperature plays a major role in the decline, not just overfishing.

What mechanisms are leading to the decline in fish abundance?

Tanganyika is a really big lake, so big that the influx of nutrients from rivers is small relative to demand by the algae that form the base of Tanganyika’s food chain. Instead, the majority of the nutrient supply comes from recycling of nutrients stored in the vast pool of cool water in the bottom of the lake. During the cool, dry season, this colder water and the nutrients within it rise and mix with the lake surface, where algae and other photosynthetic organisms can use them. However, this process, known as upwelling, requires cool surface waters. As water warms, it becomes less dense, and this warm, low-density water forms a surface lid that suppresses the upwelling of nutrients to the surface. In this way, climate warming suppresses production by the algae and other microorganisms that comprise the base of Tanganyika’s food chain.

Given that the decline in fish stocks is due to forces larger than local-level fishing, is there anything that can slow the decline?

Tanganyika’s fish stocks are under pressure from both climate change and overfishing. The fishery will have to be managed via catch limits or similar mechanisms that take climate-driven fish declines into account. Perhaps more importantly, the surest way to mitigate the impacts of climate change is to limit the magnitude of climate change itself. The Paris Agreement negotiated within the United Nations Framework Convention on Climate Change in 2015 aims to limit global temperature to less than 2 degrees above pre-industrial levels through greenhouse gas emissions reductions. It is critically important that the United States and other countries meet their emissions targets to mitigate the impacts of climate change on ecosystems such as Lake Tanganyika.