Bacteria are widely used to manufacture proteins used in medicine and industry, but the bugs often bungle the job. Many proteins fall apart and get cut up inside the bacteria before they can be harvested. Others collapse into useless tangles instead of folding properly, as they must in order to function normally.

A research team led by James Bardwell, who is a professor of molecular, cellular and developmental biology and of biological chemistry, as well as a Howard Hughes Medical Institute investigator, at the University of Michigan, developed a way to coerce bacteria into making large quantities of stable, functional proteins. Then, in exploring why these designer bacteria were so successful, the scientists discovered the molecular helper, Spy.

The research is scheduled for online publication Feb.13 in the journal Nature Structural & Molecular Biology. 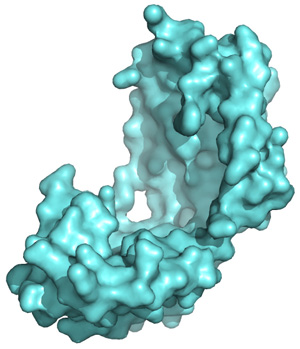 A cradle-shaped molecular assistant called Spy aids in protein refolding and protects unstable proteins from being cut up or sticking to other proteins. Image credit: Shu Quan

In the first phase of the research, the team designed biosensors that directly link protein stability to the antibiotic resistance of bacteria. When a poorly folded, unstable protein is inserted into the middle of the biosensor in a bacterium, it disrupts the bug’s resistance to antibiotics. When the protein is stabilized, resistance is restored.

The researchers inserted a particularly unstable protein into Escherichia coli (E. coli), which forced the bacteria to either adapt by improving protein stability or die when exposed to antibiotics. Through a “directed evolution” experiment, in which the scientists selected colonies with increasing antibiotic resistance—and increasing protein stability—the team generated designer bacteria that produced up to 700 times more of the previously unstable protein.

“It is exciting to realize that if even bacteria are asked in the right way, they can come up with good solutions to hard problems,” said postdoctoral fellow Shu Quan, who spearheaded the work.

In looking to see why the designer bacteria were so much better at producing proteins, the scientists found that the efficient microbes were making much more of a small protein called Spy. Further study showed that the cradle-shaped Spy aids in protein refolding and protects unstable proteins from being cut up or sticking to other proteins.

“Our work may usher in an era of designer bacteria that have had their folding environment customized so that they can now efficiently fold normally unstable proteins,” Bardwell said.

The researchers received funding from Howard Hughes Medical Institute and the Canadian Institutes of Health Research.