Q&A: What studying networks can tell us about the world and ourselves

There was an opening ceremony on Feb. 5 for the Yale Institute for Network Science (YINS), dedicated to exploring fundamental properties of networks as they appear throughout the biological, physical, and social sciences.

The interdisciplinary institute will be led by co-directors Nicholas Christakis, the Sol Goldman Family Professor of Social and Natural Science, and Daniel Spielman, the Henry Ford II Professor of Computer Science and Mathematics.

Christakis and Spielman recently met with YaleNews to discuss the nature of networks and the institute’s mission. The following is an edited version of the conversation.

What is a simple definition of a network?

Christakis: Networks are composed of two elements: Nodes, which are items to be connected — examples are people, genes, neurons, and computers. The second components are ties — the so-called edges that connect the nodes. Combining nodes and ties results in creation of a network, also known as a graph.

How did network science evolve?

Christakis: Network science as we know it likely began in the 1890s, when sociologists were studying groups of people and at some point recognized that the fundamental units of human social groups were not necessarily dyads [groups of two people] but could be triads. Also, in the 1950s, mathematicians working in the field of topology became interested in how to mathematically study network graphs. In the 1970s, researchers — primarily sociologists — were working to understand basic principles that can characterize networks.

But what happened in the 1990s was rather extraordinary. Basic ideas from the social sciences about human networks flowed into the natural sciences, prompting biologists and physicists to become interested in networks of genes, stars, neurons, computers, and so on. They applied ideas that had been developed in the social sciences and combined them with a rich ongoing tradition in mathematics.

This coincided with the period during which the Internet was becoming more widely accessible, resulting in an increase in the availability of data as well as an increase in statistical and mathematical methods for studying networks.

Over the past 10 years, the field has grown tremendously offering the potential of fundamental advances in diverse areas. 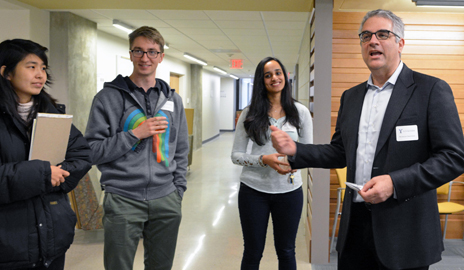 Physicists have also contributed through the field of statistical mechanics. They developed network theory to explain how local interactions between neighboring molecules result in large-scale behavior that we can see. Their explanations of phenomena like magnets and phase transitions of matter (between liquid and solid, for example) rely on networks and have inspired the search for analogous phenomena in other networks.

What can we learn from studying networks?

Christakis: We use network science to discover how the whole comes to be greater than sum of its parts. The study of networks enriches our understanding of phenomena such as riots, violence, and social and biological epidemics — enabling us to develop more effective interventions.

At YINS, we are interested in not only discovering fundamental principles about how networks work, but also in inventing new methods and deploying this science to make the world better. 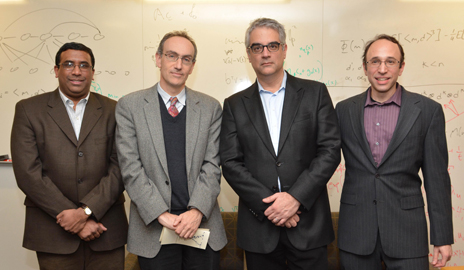 Describe the interdisciplinary nature of YINS.

Christakis: In the sciences, we are seeing increasing returns where fields overlap and diminishing returns in specialization and reductionism. YINS lies at the intersection of many fields. The institute is interdisciplinary to its core, and we believe that innovation emerges from the intersection of ideas and disciplines.”

Spielman: Fundamentally, YINS will be a collection of at least 20 faculty members from various disciplines who have ongoing research projects related to networks. We are launching a weekly seminar series this spring, and we already have faculty representing over 10 departments and schools across campus, including behavioral sciences like sociology and psychology, economics and management, evolutionary biology, computer science, statistics, mathematics, forestry, medicine, and public health.

Christakis: The School of Engineering and Applied Science is also a major partner in this endeavor. Initially, we will have at least three to five engineering faculty in residence at YINS, including Sekhar Tatikonda and Wenjun Hu.

We realize that network science even intersects with the arts and humanities. There is a tremendous movement, for example, in data visualization. There are informative, beautiful ways of rendering network phenomena, and we are very interested pursuing that aspect. There are also potential linkages with the Law School, such as issues of privacy and legal frameworks that govern information sharing online.

At Yale, I am pursuing new directions as a result of serendipitous interactions with other faculty members. I have discussed collaborations with psychologists David Rand, June Gruber, and Laurie Santos, as well as evolutionary biologist Richard Prum and epidemiologist Alison Galvani, to name a few.

How can network science improve the human condition?

Christakis: Many Yale faculty members are exploring novel ways to use network science for pro-social ends — for example, David Rand in the psychology department, whose research focuses on cooperative human behavior. His work combines aspects of game theory, evolutionary biology, and psychology to understand how groups come together to cooperate. June Gruber, another Yale psychologist, studies emotional contagion — how our emotional states affect each other.

Sociologist Andrew Papachristos studies networks to predict epidemics of violence. Emily Erickson, also in the sociology department, has been examining the role of trade networks in the emergence of capitalism.

In my own lab, we are seeking to achieve a deep understanding of the genetics and evolutionary biology of human social interaction. Where do social interactions come from? Why do we live our lives in social networks?

We are also conducting experiments in the developing world to determine whether we can make entire villages change their behavior. We have done large-scale experiments in Honduras, Tanzania, and Uganda in an attempt to have communities apply clean water interventions and to address other public health concerns.

We are also doing experiments to see how we can organize people online in such a fashion that they become more cooperative, more innovative, or healthier. For example, can we get people to quit smoking? You have thousands of people who want to quit smoking logging on a website: How do you connect them to foster smoking cessation?

Has the Internet changed the study of networks?

Christakis: The broad penetration of the Internet captivated academics’ interest and made the public more aware of their embeddedness in networks.

Spielman: For a sociologist, it is incredibly painstaking work to map out a network of individuals. The advent of the Internet suddenly made larger data sets much more easily accessible.

Christakis and Spielman will lead the first YINS seminar on Feb. 19. The lunch seminars will take place at noon on Wednesdays at 17 Hillhouse Ave. The weekly seminars are open to faculty, graduate students, and undergraduates.

For more information about the seminar series, or other programs at YINS, contact Deputy Director Tom Keegan.