Everything you ever wanted to ask your doctor—from conception to contraception.

This time of year, there’s always a lot of focus on fatherhood. And for good reason, as almost half of American men are fathers.

Two-thirds of men first become dads in their 20s, although plenty of men father children sooner or later—into their 40s, 50s and beyond, according to the Centers for Disease Control and Prevention.

(And, in case you wondered, the oldest man to father a child was 92, according to Guinness World Records.)

Whether you want to be a dad, don’t want to be a dad or are unsure, Stanton Honig, MD, the director of Yale Medicine’s Male Reproductive Health and Sexual Medicine programs, has probably heard your questions before.

So we asked him to tell us what men need to know about becoming a dad (or not): 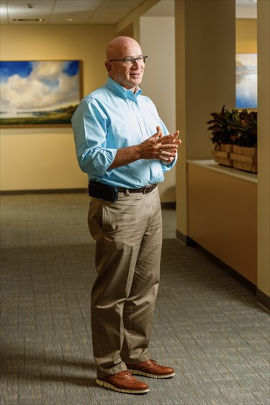 Can you be too old to father a child?

Not like in women. In women, eggs deteriorate very quickly after age 35. In men, there’s some deterioration of sperm quality over time, but it’s nowhere near what it is with women and their eggs. For older fathers, there’s a higher rate of infertility and higher risk of birth defects, but it’s still much lower than in older women.

Because men really don’t have the same biological clock concerns as women, what’s really important is to wait and make sure you’re with the right person. Freezing sperm is possible and sometimes useful for men undergoing cancer treatments that may affect sperm quality and production. But, there’s no evidence that freezing sperm is important if you’re not planning to have a child until you’re 40 or 50, whereas it may be smart for women who are approaching their late thirties to preserve eggs.

How often are fertility problems the guy’s issue?

Half the time. It’s very important for both partners to get checked for fertility issues. Fertility testing for men means having a semen analysis. And if it turns out there’s a male-factor fertility issue, you should see a reproductive urologist.

For men who have fertility problems, it may be a harbinger of other health issues later in life such as prostate or testicular cancer. That’s why it’s important to get male-factor fertility problems evaluated and not just do artificial insemination or in vitro fertilization before being checked out. In some cases, your urologist can even restore your fertility and solve your health issue.

What is a sperm test?

It starts with a semen sample. In our practice we make it easy for patients to bring it in from home, so they have a comfortable environment to collect a specimen. It has to be delivered to us within an hour. And two days’ abstinence is required before collection. You bring the sample to your appointment. During your visit, it’s evaluated within an hour, and we discuss the results. It’s one-stop shopping.

When should I get my semen checked?

Have a semen test if you and your partner have been trying to get pregnant for nine to 12 months or so unsuccessfully. Or go earlier if something in your history suggests you might have fertility issues: undescended testicle, enlarged veins (varicocele), an injury to the testicle that required an emergency department visit, testicular cancer, or you have undergone chemotherapy or radiation therapy. All can affect sperm count. This should be done early especially if your partner is over 35.

Does steroid use affect sperm count?

Absolutely. Steroids—whether you’re taking them now or did so previously—can have a negative effect on your ability to make sperm. If you have ever taken steroids recreationally or you’re on testosterone because a doctor prescribed  it for low testosterone, you need to get off of it because it’s going to negatively affect sperm. The sperm count and quality can come back in most cases—but it depends. Sometimes it’s a reversible problem. Sometimes it’s not.

Marijuana, heavy alcohol use and narcotics, including heroin, all can have negative effects on sperm and can affect brain hormones that turn on testosterone and sperm production. Addiction treatment medications such as Suboxone and methadone can also influence the hormones that affect sperm and testosterone.

Do I really need to wear a condom?

I would say yes for multiple reasons, unless you’re in a mutually monogamous relationship. The number one reason is to prevent sexually transmitted diseases, and number two is to prevent pregnancy. You have to be careful who you are sleeping with. Even if you know a person very well, you don’t know everything about them.

Is vasectomy as bad as my friends make it sound—or are they pulling my, um, leg?

Absolutely not. They’re putting you on. It’s a 15-minute procedure. It’s done under local anesthesia. I joke around with my patients while doing the procedure. We talk about sports, their job, their kids, and before you know it, they’re done. Sometimes men like to schedule vasectomies before March Madness or the Super Bowl because it gives them an opportunity to relax on the couch while they’re healing. They get to do stuff they typically enjoy, like binge watch sports.

Honestly, vasectomy is much less invasive than your partner having her tubes tied. For men, vasectomy is a low-risk, low-discomfort permanent birth control option. (During a vasectomy, the surgeon separates the vas deferens to prevent sperm from entering the urethra.)

How long will I be out of commission after a vasectomy?

Usually if you have a desk job, you’re back to work within 48 hours. If your job requires heavy lifting, three to five days. And no sex for about a week.

Can a vasectomy be reversed?

Yes, it can. Sometimes life changes. In the hands of an experienced microsurgeon, the success rates are very good —80 to 90 percent—that you will have sperm coming out after vasectomy reversal. It’s a technically challenging procedure, but when couples come in, they’re very excited because they’re looking forward to a new aspect of their life. I’ve been helping patients like this for over 20 years, and it’s really rewarding to help them continue their family or start a new family.