Berkeley Researchers Uncover the Key to Self-Awareness in Genome Editor

A central question has been answered regarding a protein that plays an essential role in the bacterial immune system and is fast becoming a valuable tool for genetic engineering. A team of researchers with the Lawrence Berkeley National Laboratory (Berkeley Lab) and the University of California (UC) Berkeley have determined how the bacterial enzyme known as Cas9, guided by RNA, is able to identify and degrade foreign DNA during viral infections, as well as induce site-specific genetic changes in animal and plant cells. Through a combination of single-molecule imaging and bulk biochemical experiments, the research team has shown that the genome-editing ability of Cas9 is made possible by the presence of short DNA sequences known as “PAM,” for protospacer adjacent motif.

“Our results reveal two major functions of the PAM that explain why it is so critical to the ability of Cas9 to target and cleave DNA sequences matching the guide RNA,” says Jennifer Doudna, the biochemist who led this study. “The presence of the PAM adjacent to target sites in foreign DNA and its absence from those targets in the host genome enables Cas9 to precisely discriminate between non-self DNA that must be degraded and self DNA that may be almost identical. The presence of the PAM is also required to activate the Cas9 enzyme.” 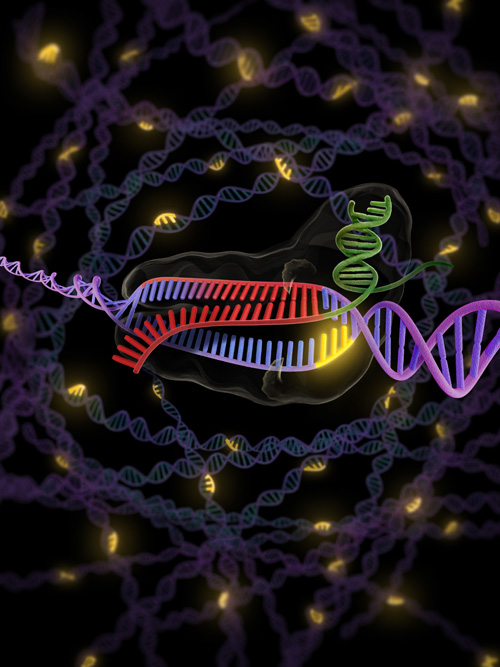 Short DNA sequences known as “PAM” (shown in yellow) enable the bacterial enzyme Cas9 to identify and degrade foreign DNA, as well as induce site-specific genetic changes in animal and plant cells. The presence of PAM is also required to activate the Cas9 enzyme. (Illustration by KC Roeyer.)

With genetically engineered microorganisms, such as bacteria and fungi, playing an increasing role in the green chemistry production of valuable chemical products including therapeutic drugs, advanced biofuels and biodegradable plastics from renewables, Cas9 is emerging as an important genome-editing tool for practitioners of synthetic biology.

“Understanding how Cas9 is able to locate specific 20-base-pair target sequences within genomes that are millions to billions of base pairs long may enable improvements to gene targeting and genome editing efforts in bacteria and other types of cells,” says Doudna who holds joint appointments with Berkeley Lab’s Physical Biosciences Division and UC Berkeley’s Department of Molecular and Cell Biology and Department of Chemistry, and is also an investigator with the Howard Hughes Medical Institute (HHMI).

Doudna is one of two corresponding authors of a paper describing this research in the journal Nature. The paper is titled “DNA interrogation by the CRISPR RNA-guided endonuclease Cas9.” The other corresponding author is Eric Greene of Columbia University. Co-authoring this paper were Samuel Sternberg, Sy Redding and Martin Jinek. 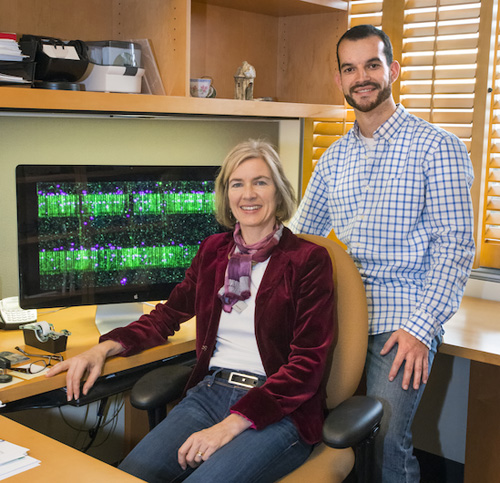 Jennifer Doudna and Samuel Sternberg used a combination of single-molecule imaging and bulk biochemical experiments to show how the RNA-guided Cas9 enzyme is able to locate specific 20-base-pair target sequences within genomes that are millions to billions of base pairs long. (Photo by Roy Kaltschmdit)

Bacterial microbes face a never-ending onslaught from viruses and invasive snippets of nucleic acid known as plasmids. To survive, the microbes deploy an adaptive nucleic acid-based immune system that revolves around a genetic element known as CRISPR, which stands for Clustered Regularly Interspaced Short Palindromic Repeats. Through the combination of CRISPRs and RNA-guided endonucleases, such as Cas9, (“Cas” stands for CRISPR-associated), bacteria are able to utilize small customized crRNA molecules (for CRISPR RNA) to guide the targeting and degradation of matching DNA sequences in invading viruses and plasmids to prevent them from replicating. There are three distinct types of CRISPR–Cas immunity systems. Doudna and her research group have focused on the Type II system which relies exclusively upon RNA-programmed Cas9 to cleave double-stranded DNA at target sites.

“What has been a major puzzle in the CRISPR–Cas field is how Cas9 and similar RNA-guided complexes locate and recognize matching DNA targets in the context of an entire genome, the classic needle in a haystack problem,” says Samuel Sternberg, lead author of the Nature paper and a member of Doudna’s research group. “All of the scientists who are developing RNA-programmable Cas9 for genome engineering are relying on its ability to target unique 20-base-pair long sequences inside the cell. However, if Cas9 were to just blindly bind DNA at random sites across a genome until colliding with its target, the process would be incredibly time-consuming and probably too inefficient to be effective for bacterial immunity, or as a tool for genome engineers. Our study shows that Cas9 confines its search by first looking for PAM sequences. This accelerates the rate at which the target can be located, and minimizes the time spent interrogating non-target DNA sites.”

“We found that Cas9 interrogates DNA for a matching sequence using RNA–DNA base-pairing only after recognition of the PAM, which avoids accidentally targeting matching sites within the bacterium’s own genome,” Sternberg says. “However, even if Cas9 somehow mistakenly binds to a matching sequence on its own genome, the catalytic nuclease activity is not triggered without a PAM being present. With this mechanism of DNA interrogation, the PAM provides two redundant checkpoints that ensure that Cas9 can’t mistakenly destroy its own genomic DNA.”

This research was primarily supported by grants from the National Institutes of Health and the National Science Foundation.

For more about the research of Jennifer Doudna go here

For more about the research of Eric Greene go here