Putting it to the test

It’s estimated that about 788,000 people worldwide died of liver cancer in 2015, the second-leading cause of cancer deaths, according to the latest statistics from the World Health Organization. One of the major challenges in combatting this disease is detecting it early because symptoms often don’t appear until later stages.

But a team of researchers led by University of Utah chemical engineering and chemistry professor Marc Porter and U surgeon and professor Courtney Scaife has developed a rapid portable screening test for liver cancer (hepatocellular carcinoma) that doesn’t involve sending a specimen to a blood lab and cuts the wait time for results from two weeks to two minutes. This new and inexpensive test — the team is working to lower the cost to about $3 per test — can be administered wherever the patient is, which will be particularly valuable in developing nations with little access to hospitals. 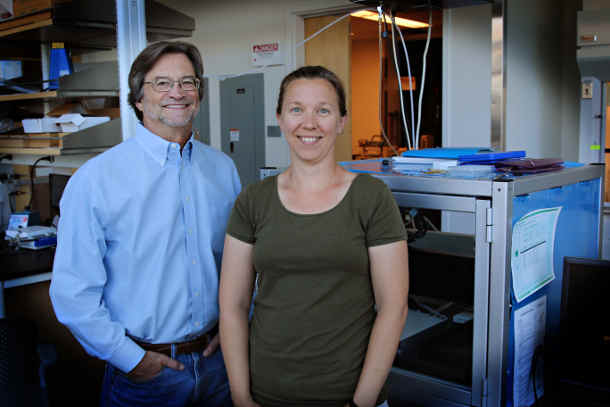 University of Utah chemical engineering and chemistry professor Marc Porter, left, and Nano Institute of Utah research associate Jennifer Granger, right, hold a spectrometer that works with a new rapid portable screening test for liver cancer they have developed that doesn’t involve sending a specimen to a blood lab and cuts the wait time for results from two weeks to two minutes. This inexpensive test can be administered wherever the patient is, which will be valuable for developing nations with little access to hospitals. PHOTO CREDIT: University of Utah College of Engineering

Currently, testing for liver cancer involves lab-based blood tests and ultrasound imaging, both of which require traveling to major cities and can often cost more than a month’s salary in low- and middle-income countries.

“If we can develop a rapid test that performs at a high level of clinical accuracy,” Porter says, “then we’ve got something that can have an impact on human lives.”

Researchers also believe the test can be easily modified to detect infectious diseases such as tuberculosis, malaria and dengue fever, a mosquito-borne tropical disease that can be life-threatening. 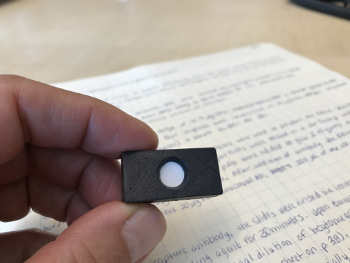 A small domino-sized cartridge holds a membrane for a new field test for liver cancer developed by researchers from the University of Utah. The test doesn’t involve sending a specimen to a blood lab and cuts the wait time for results from two weeks to two minutes. It can be administered wherever the patient is, which will be valuable for developing nations with little access to hospitals. PHOTO CREDIT: University of Utah College of Engineering

The test uses a small domino-sized plastic cartridge containing a paper membrane that selectively traps biomarkers (proteins specific to a certain disease) from biological fluids. A small droplet of blood, saliva, or urine, or even a teardrop, from the patient is dropped onto the membrane. This is followed by the droplet of gold nanoparticles, which tags the biomarkers trapped in the membrane. If the biomarkers are present, a red spot appears, signaling the patient has the disease and should seek more testing and possible treatment.

“The concept is similar to a home pregnancy test, but instead of flowing laterally, it flows through the membrane,” says Granger, the lead author on the paper.

A handheld spectrometer manufactured by project collaborator B&W Tek, a Delaware-based manufacturer of mobile spectrometers, can analyze the membranes and measure how much of the biomarkers is present, which in the future could determine the severity of the disease or how a patient is responding to treatment.

The idea for the test is a spinoff of a similar test Porter developed eight years ago that astronauts on the International Space Station used to test the cleanliness of their drinking water. “This is a smarter offshoot of that,” says Porter, who also is the director of the Nano Institute of Utah.

Now that the team has proven the concept with liver cancer and built a prototype test kit, researchers plan to evaluate the technology in Mongolia in spring of 2019. The East Asian country has the highest rate of liver cancer in the world.

The project was funded by grants from the National Institutes of Health, the National Cancer Institute through the Affordable Cancer Technologies Program and the Huntsman Cancer Institute. The team also received funding from Utah-based nutritional supplement company USANA which is interested in using a form of the test for customers with certain vitamin deficiencies.

“USANA has a keen interest in the ability to measure certain vitamins and biomarkers in various bodily fluids that can be related to a person’s health status,” said Mark Brown, Executive Director of Laboratory Sciences at USANA.  “This would allow our customers to see for themselves the benefit of taking USANA’s high quality products. Rather than taking a blood sample and sending it off to lab for analysis, this technology could make it possible for people to do their own analysis in the comfort of their own home. Small sample size and simplicity of use are crucial components of making this a reality, and this research is a step closer to that end.”

The paper was also co-authored by Ken Li and Sean Wang of B&W Tek.